In January 2012 the Smithsonian’s National Museum of African American History and Culture (NMAAHC), in partnership with the Thomas Jefferson Foundation at Monticello, opened the exhibition Slavery at Jefferson’s Monticello: Paradox of Liberty. The exhibition is on view in the NMAAHC gallery at the National Museum of American History through Oct. 14, 2012.

To celebrate the exhibition, Smithsonian Gardens, in collaboration with NMAAHC and the Thomas Jefferson Foundation at Monticello, have chosen to create a garden to spotlight the Gillette family, one of the six slave families featured in the exhibition. The garden is a scaled down recreation of the plot cultivated by the Gillette family to grow vegetables for their personal use and to sell to the Jefferson family. Research indicates Israel Gillette Jefferson, a waiter and carder in the Monticello cloth factory, sold large quantities of cabbage; his father, Ned, also known as Edward Gillette, sold watermelons, beans, and potatoes. This garden demonstrates the expertise and entrepreneurship used by the Gillette family to improve their quality of life.

While we cannot definitively determine the exact produce grown in the Gillette garden, the research conducted by Peter Hatch, Director of Gardens and Grounds at Monticello, sheds some light on crop production. His thorough examination of Jefferson and Randolph account books, plant varieties typical of the 19th century, and crops grown at Monticello helped determine what was cultivated by enslaved families at Monticello.

Monticello’s Thomas Jefferson Center for Historic Plants sent seed, which we started to grow at the Smithsonian Gardens greenhouse. We broke ground at the southwest corner of the Heirloom Garden at NMAH using the following garden practices:

On March 14, 2012, we removed the top six to eight inches of soil that had been overwhelmed by a particularly invasive weed and added five cubic yards of a well-balanced mix of topsoil and compost to the site.

We also constructed a wattle fence for the garden. “Wattling” is a method of fence-making. We buried stakes every couple of feet and wove in boughs to form a tight, strong fence. Wattle fencing was used to keep out chickens and provide protection from the weather. 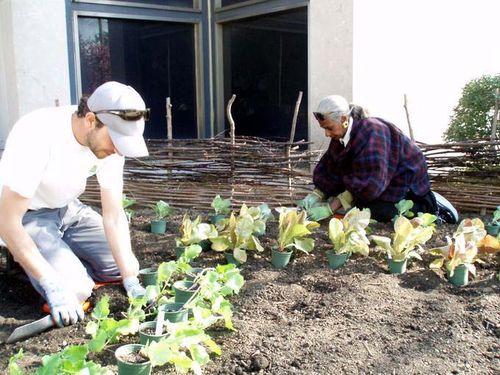 Information about the vegetables planted in the garden can also be found on Monticello’s website. We look forward to rotating the crops throughout the summer. 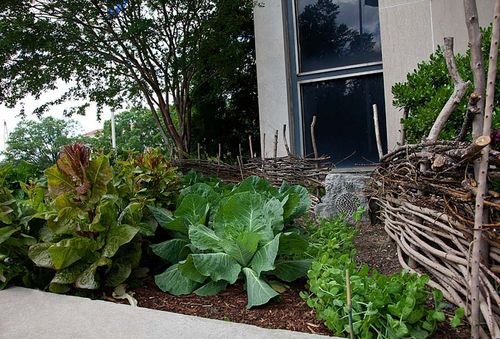 Results of the group’s labor. Photo by Michael Barnes.

Come see this story unfold as the garden grows at the National Museum of American History. Visitors will find it at the southwest corner of the terrace (to the left of the museum’s Mall entrance), overlooking the new NMAAHC museum site. Learn more about the lives of the families at Monticello on their website.

Joe Brunetti and Erin Clark are Smithsonian Gardens Horticulturists at the National Museum of American History. This post originally appeared on the Slavery at Jefferson’s Monticello: Paradox of Liberty website.