Beauty and the beets

Once upon a time, around 2,000 B.C., there grew a magical plant in the Mediterranean region. Ancient civilizations heralded the plant as a miraculous food source and lauded its high nutrient content, long storability, and adaptability to a wide variety of climates. Hearing of its splendor, people everywhere—from Thebes to the Netherlands—planted its seeds and reaped its bounty. So beloved was the plant that people continue to cultivate it to this day, ensuring that its mystical qualities live on. 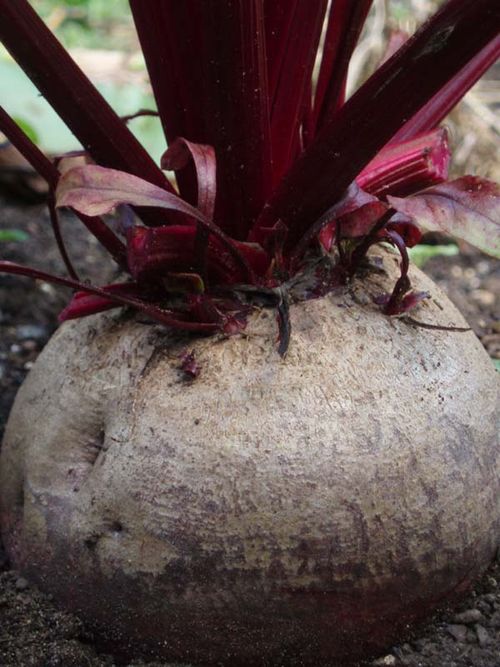 A beet grown in the re-created World War II Victory Garden on the terrace outside the Museum's cafeteria.

Fairy tales aside, the beet is indeed a remarkable vegetable. It is best known for its edible root, which comes in a variety of colors—from fiery red and deep purple, to vibrant orange and golden yellow. Its sugar can also be extracted for use as a sweetener. But the beet is more than a run-of-the-mill root vegetable: the leaves, which are chock-full of vitamins, can be eaten at any stage of the plant’s growth, and they’re often used as nutritious fodder for animals. Depending on its intended use, this multitasking vegetable falls into four categories: the root vegetable or garden beet (for the table), the sugar beet (for sugar), chard or leaf vegetable (for leafy greens), and the root beet (for animal fodder).

The beet has made history. Eating the leaves was particularly popular among the ancient Greeks, Romans, and Jews. In the mid-18th century, the King of Prussia set out to discover which beet would prove to be the sweetest of them all. After evaluating 23 varieties, he selected the Silesian beet, which would serve as the grandfather of modern sugar beet. In the early 19th century during the Napoleonic Wars, the British Navy prevented the importation of cane sugar to France. Forced to improvise, French citizens turned to beet sugar to sweeten their soufflés. In 1830, North America jumped on the sweet beet bandwagon, and by 1840, 5 percent of the world’s sugar came from beets; by 1880, that figure grew to 50 percent.

Throughout the colonial era, Americans relied heavily on the garden beet for survival during the winter months. The vegetable was considered an essential winter food—especially during the Six Weeks of Want, a period of produce scarcity that extended from the end of January through mid-March—because it had a long shelf life and could be easily stored for an extended harvest. When other more perishable vegetables were used up, the hearty garden beet swooped in, like a knight in crimson armor, to nourish the colonists until it was warm enough for spring planting.

This mentality of prudent gardening was also present during World War II when many commodities, including food, were in short supply because much of the nation’s domestic produce was being shipped overseas to feed American troops and allies. As a popular mantra during the time went, “Use it up. Wear it out. Make it do, or do without.” Americans were encouraged to find resourceful ways in which to consume their produce, and the beet is perhaps one of the best subjects of this ideology: roast it, boil it, grill it, eat it raw; sauté the greens when they’re mature or harvest the young sprouts for a fresh salad. With the beet, it’s hard to go wrong; every dish can live happily ever after.

Here is a simple recipe that is sure to please both novice and experienced beet-eaters alike:

Directions:
1. Harvest and gently clean the beets. They bruise quite easily, which reduces shelf life.
2. Cut off the foliage, leaving about 1 inch of stem, and set the greens aside. Leaving some stem will prevent the juice from bleeding out and staining your clothing.
3. Store the beets in the fridge until you are ready to use them.
4. Twist off the remaining stems and quarter large beets (for small beets, halve or keep whole).
5. Preheat the oven to 375°. Lightly oil a baking sheet with about 1 Tbsp. olive oil, and set down the pieces, leaving a little room around them. Roast for about 45 minutes or until the skins start to blister.
6. Take out the pan and let the beets cool. The skin will slip right off. Larger beets may need extra cooking time for the skins to loosen. Some like to wear latex gloves to avoid staining fingers, or rub the beets between a paper towel.
7. In a sauté pan, heat up 2 Tbsp. of unsalted butter. Sauté the peeled beets on med/high heat in the butter until well-coated and slightly caramelized, about 5-8 minutes.
8. Remove from pan and season with sea salt, a touch of rosemary, and a bit of thyme.
9. Roughly chop the beet greens.
10. Throw the leafy greens in the same hot pan, add 1 Tbsp. of olive oil, and cook until slightly wilted, 3-5 minutes. Season them with sea salt and cracked pepper. Serve either as a side or as the main dish. Enjoy!

Here are the beet varieties currently being harvested in the Victory Garden:

‘Bull’s Blood’
Mid 19th century. Beetroots ideal when harvested young and exude juice the color of blood. Often grown for the deep maroon leaves and used as salad greens early on in growth.

‘Burpee’s Golden’
Since 1828. Golden orange in color and do not bleed or stain like red and purple beets. Greens are mild even when mature. A mild, sweeter beet.

Joe Brunetti is a Smithsonian Gardens Horticulturist at the National Museum of American History.