Clint Eastwood and the American West

Editor’s note: On June 23 and 24, the museum, in partnership with Warner Bros. Studios, will host the second Classic Film Festival in the Warner Bros. Theater, featuring the work of Clint Eastwood and classic American Westerns. Admission is free and seating is first come, first served.

“Are you going to pull those pistols or whistle ‘Dixie’?” Spoken by Josey Wales, one of Clint Eastwood’s iconic characters, such memorable lines have contributed to the popularity of the American Western. Quintessentially American, these films breathe life into the Old West, the frontier’s edge at the end of the Civil War, and illustrate the hardships endured by ordinary people as they strived to survive in a complex, unforgiving world. Actor and director Clint Eastwood has helped to shape audiences’ understanding of the American West, reinforcing the importance of honesty, courage, and family (and a good firearm) through the characters he portrays. Together, Eastwood and Warner Bros. Studios have defined a film genre that has remained popular with generations of movie goers from around the world.

Dwight Blocker Bowers, Director of Warner Bros. Festivals of classic Hollywood films and Curator of Entertainment Collections, sat down with Elizabeth Dowdle of the Office of Public Affairs and shared his thoughts about Hollywood Westerns, Clint Eastwood, and the true American West. 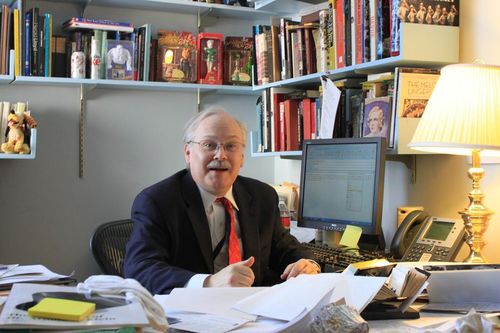 Q. Though the days of the Old West are long gone, the film industry has continued to produce a number of Western-themed films, many of which share the limelight of success stories such as Clint Eastwood’s Unforgiven, The Outlaw Josey Wales, and Pale Rider, which will be featured at the museum’s film festival this month. How does this genre sustain its popularity today? How has the film industry’s portrayal of the “Wild West” influenced the international perspective of life in the United States?

A. The western is an established film genre and sustains its popularity through actors like Eastwood; his presence as a film icon serves as a bonus in attracting audiences to westerns. The film industry’s portrayal has, for good or bad, been highly influential in forming a global perspective on the “Wild West” in its narrative. There has been a shift of perspective on the genre of the western in Eastwood films—from the absolute simon-pure heroes of Randolph Scott, Roy Rogers, and others of the Golden Age of Hollywood of the 40s and 50s to a more complex portrait of Eastwood.

Q. What is it about the tough, hardworking figures, like Eastwood’s Will Munny of Unforgiven, that appeals to the silver screen?

A. What appeals in Eastwood’s portrait of Western figures is his iconic on-screen charisma and less-is-more acting. His demeanor demonstrates a deeper complexity of the American West, beyond the simple duel between the good and the bad. “Hollywood, as everyone knows, glamorizes physical courage,” Eastwood said, “If I had to define courage myself, I wouldn’t say it’s about shooting people. I’d say it’s the quality that stimulates people that enables them to move ahead and look beyond themselves.”

Q. Critics have noted Eastwood for his tough character on the screen, a “presence of some fierce force of nature, which may be why the landscapes of the mythic, late 19th-century West become him.” How do you think the actor has influenced the West as portrayed in film?

A. Eastwood’s own complex perspective has greatly influenced views of the American West, citing the absence of absolute good or evil in its characters. His understated style tempered by his air of an awareness of, in the words of historian Richard Schickel, “potentially embittering loss, even by addictions of some sort. Not to mention anger and, more recently, by aging and the threat of mortality itself.”