It’s always exciting going into the vaults of a museum’s collection. Ok, so actually they’re rarely “vaults,” but it’s still exciting to open collection cabinets and discover what objects may lie inside. On this particular occasion, National Museum of American History curator Eric Jentsch was showing me items in the museum’s hip-hop collection. Although for several months I’ve been reading about hip-hop culture and technology, and looking at images related to it, this was my first opportunity to handle the objects themselves.

Eric opened up a cabinet and before me was an outfit worn by hip-hop advocate and community leader Afrika Bambaataa. Bambaataa was a pioneering hip-hop DJ known for playing obscure records, but his key contribution to the early hip-hop movement was bringing peace to a drug and gang riddled Bronx. He was a founding member of a gang in the Bronx River Projects but had a transformative experience when he visited Africa. He returned with a desire to provide his community with peaceful alternatives to gangs. Bambaattaa turned his turf-building skills into peacemaking skills and used them while performing grassroots promotion for hip-hop parties. In the 1970s he formed first the Bronx River Organization and then the Universal Zulu Nation, an awareness group of reformed gang members who organized hip-hop parties for youth to provide peaceful and fun havens away from violence. 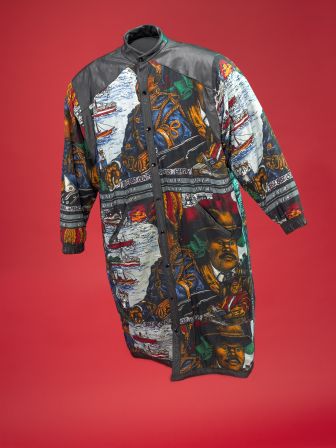 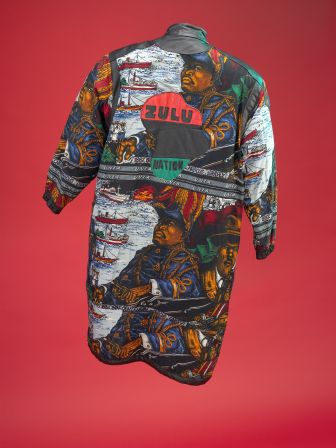 Despite having read all of this about Bambaataa, I lacked a sense of what he was like in person. But by holding one of his jackets, I could better comprehend him. From the jacket’s size I got a better idea of how big he was. From seeing the outfit’s colors and examining the quality of its workmanship I got an idea of his taste. Taking it all in together I could picture him filling out the jacket and was better able to get a sense of what it would have been like to be in his presence.

My visit to the collections also gave me information about the technological advances of hip-hop music. I have virtually no experience with sound mixing, so attempting to comprehend the evolution of mixing equipment from a record player to a mixing board has been a bit mind boggling. For example, DJ Grandmaster Flash invented a mixer from spare parts. According to him, “today you can buy turntables, needles and mixers that are equipped to do whatever. But at that particular time, I had to build it. I had to take microphone mixers and turn them into turntable mixers. I was taking speakers out of abandoned cars and using people’s thrown-away stereos.” 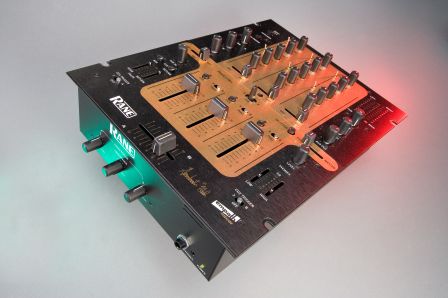 Once hip-hop became popular, the music industry took notice of the technologies artists invented to produce hip-hop’s sound. The Rane Corporation worked with Grandmaster Flash to develop a mixer that, in Flash’s opinion, corrected the various problems he encountered as a DJ. The Rane mixer in the NMAH’s collection was donated by Flash. I was surprised by its appearance. Having read about the heavy use hip-hop equipment got, and how even after mixers no longer functioned they were re-purposed, this Rane mixer was in nearly mint condition. I expected something with heavy wear and tear and mis-matched parts. I was also surprised by its complexity. I didn’t think it would look so much like the mixers currently in use. Seeing this mixer designed (and donated) by Flash really impressed upon me how rapidly mixing technology improved.

I think that sometimes people undervalue doing research in museum collections, but it’s something that I have found useful in my research. At the very least, it’s exciting to handle objects used by the people you’ve been researching. I look forward to delving deeper into the Museum’s hip-hop collection as research for Places of Invention continues.