Today, June 25, Johnny Smith celebrates his 90th birthday. In October 2011, Ken Kimery, Executive Producer of the Smithsonian Jazz Masterworks Orchestra and Program Director of the Jazz Oral History Program, and Randall Kremer, a guitarist and the National Museum of Natural History’s Director of Public Affairs, traveled to Johnny Smith’s home in Colorado Springs to acquire Smith’s Gibson model guitar.  In the museum’s effort to preserve the legacy of jazz, this influential guitarist’s revolutionary instrument has become an important addition to the museum’s collection. This post highlights the life of the legendary self-taught guitarist.

Jazz guitarist Johnny Smith is a leading figure among cool jazz guitarists. He is best known for his number one album in 1952, Moonlight in Vermont, and tunes inspired by the fluidity of piano notes and a unique playing style described as smooth and velvety. A 1998 recipient of the Smithsonian Institution’s James Smithson Bicentennial Medal for his contributions to jazz, Smith’s career and legendary guitar took center stage at the museum April 22 when it was highlighted at the museum’s Embassy Jazz Day concert and discussion co-hosted with the U.S. State Department and webcast worldwide in honor of UNESCO’s first International Jazz Day. 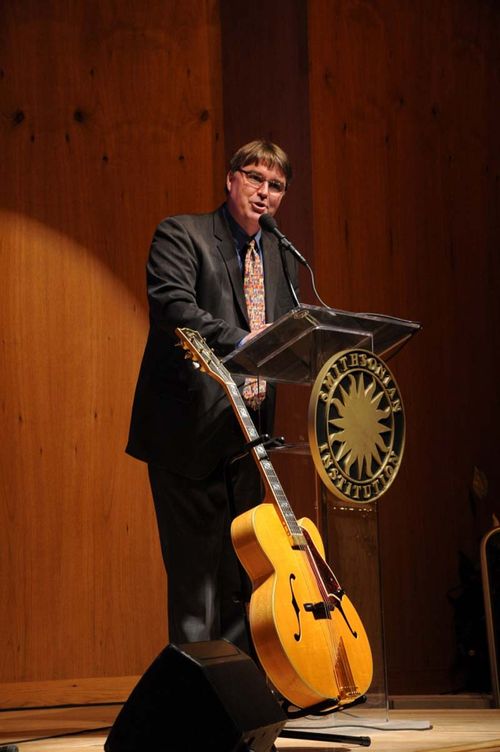 A self-taught musician, Johnny Smith got his start in music at age 13. Born in Birmingham, Alabama in 1922, he was introduced to instruments by his father who played the five-string banjo, an instrument of African origin often played in jazz and folk music.

The family moved to Portland, Maine during the Great Depression. Smith struck a deal with a local pawn shop owner. He would tune the shop’s guitars in exchange for being allowed to play them on the side. The guitar quickly became his favorite instrument as Smith taught himself to play by listening to tunes on the radio.

It wasn’t long before he was giving guitar lessons to Portland locals, even though he still didn’t own his own instrument. That came as gift from a student who gave him an old flat-top Kalamazoo by Gibson that he later traded for a Gibson L5.

The first musical group he joined was Uncle Lem and the Mountain Boys, where he earned $4 a night playing dances and fairs around Maine. He eventually left to form his own group, the Airport Boys. The band was short-lived as the military called up young men to serve in World War II.

Mr. Smith tried to enlist in the Army Air Corps but was denied because of poor vision in his left eye. An option was to go to mechanics school or to join the military band. He chose the Army band, but there was a condition: He had two weeks to learn how to read music, and since the band didn’t have guitarists, he’d have to learn to play the cornet, an instrument in the trumpet family. Smith studied relentlessly, earning a spot in the Army band and eventually a promotion to the lead trumpet chair.

In 2005, NAMM, the National Association of Music Merchants, conducted an oral history with Johnny Smith. Listen to him discuss his first guitar and early career here.

In 1947, after leaving the army, he became a respected musician in the NBC Symphony Orchestra in New York City. While working in the orchestra, he played a variety of musical genres along with jazz and composed some of the most inspirational cool jazz works of his time.

In 1952, Smith combined talents with saxophonist Stan Getz, also from the NBC musician staff, to produce his most famous album, Moonlight in Vermont. The album, which featured a jazz rendition of the title song (originally written by John Blackburn and Karl Suessdorf), was well-received and became the number one album of 1952.

This landmark hit further advanced Johnny Smith’s career and earned him the title “King of Cool Jazz Guitar” alongside numerous awards and public recognition, including Down Beat’s Best Jazz Guitarist, Best Jazz Record, and the Jazz Critic’s Awards. His most famous musical composition, “Walk Don’t Run,” was recorded by Chet Atkins and reached #2 on the Billboard charts when recorded by the Ventures. By 1958, Smith had left the swinging New York City nightlife and music scene for a quieter life as a widower raising a four year-old daughter. He moved to Colorado Springs where his mother and two brothers resided. But still music called.

In 1960, the Gibson Guitar Company proposed that Smith endorse a Gibson guitar. Smith liked the idea, but said he would give his approval only if the guitar was designed to his specifications. Gibson sent out a prototype model, and Mr. Smith agreed to endorse the design after suggesting two minor adjustments that Gibson approved and made.

The Gibson Johnny Smith Guitar was marketed in 1961 at $795, the most expensive Gibson guitar of its time, aside from the Super 400CES, according to Vintage Guitar Magazine. 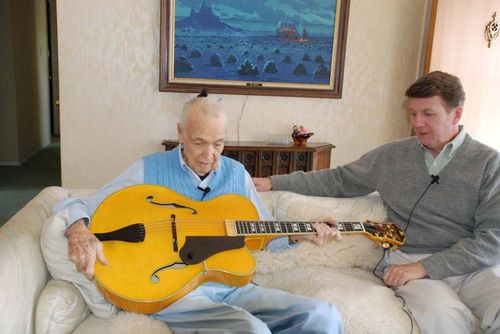 Randall Kremer, a guitarist and Director of Public Affairs at the National Museum of Natural History, sits with Johnny Smith as he plays his guitar. 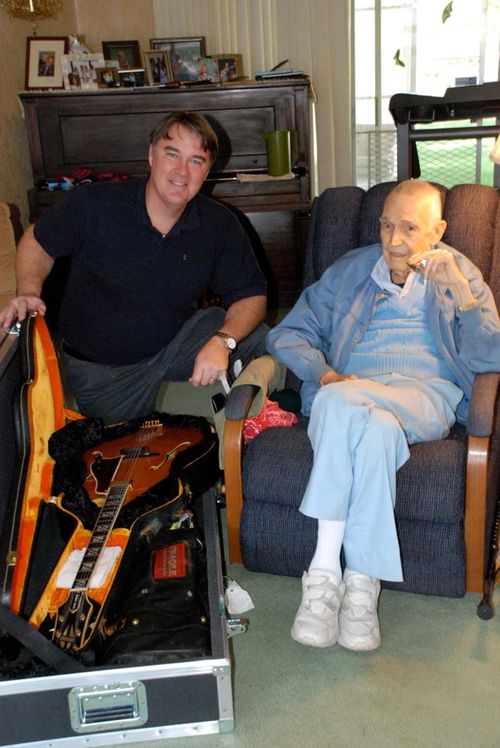 Johnny Smith poses with his Gibson guitar and Ken Kimery, at his home in Colorado.

Harley Diven was a fall 2011 intern for Jazz Appreciation Month at the National Museum of American History.