The girls in the band at the Smithsonian

At the Smithsonian Institution National Museum of American History they’re the girls in the band, instrumentalists in the 18-piece Smithsonian Jazz Masterworks Orchestra (SJMO) founded in 1990 “as the nation’s jazz orchestra” by Congressional appropriation and the advocacy of jazz-loving Congressman John Conyers (D-MI).

Trombonist Jen Krupa had been living in Washington several years before she began playing with SJMO. “I was ecstatic!” she says about getting that first call. Baritone saxophonist Leigh Pilzer suspects that she owes her position to a recommendation from SJMO lead alto saxophonist Charlie Young. And lead trumpeter Liesl Whitaker says that while she received the call for an SJMO gig right after arriving in town and played with the orchestra for a couple of years, she wasn’t called again for nearly five years. She says she never asked why the call back took so long. “I was scared of what they would say. My Dad was so thrilled that I was in the orchestra.”

Their pathways into music and jazz were as varied as they are. Childhood exposure to pop, classical, and vocal music, and early training on instruments ranging from piano to cello preceded their interests in jazz and big band. But of the many factors that led Jen, Leigh, and Liesl to becoming professional jazzwomen they all count a love of music, supportive family, and community mentors who helped them fulfill their musical passion and steer them past gender biases that might have derailed their dreams as key.

“There’s something about being a girl in a man’s field,” says Liesl. “We work harder to prove ourselves.” Even then, “As the saying goes, a woman has to work twice as hard as a man to be considered half as good,” adds Leigh.

So when SJMO women were asked to perform at the Jazz Appreciation Month 10th Anniversary in April 2011 Launch featuring original members of the International Sweethearts of Rhythm they jumped at the chance to honor the legendary band members and pay homage to the legacy of women and jazz. 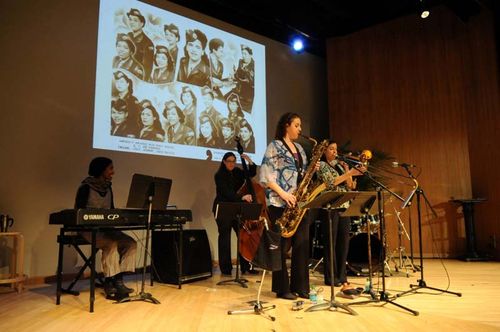 The International Sweethearts of Rhythm was the nation’s first integrated, all female big band. Founded at the Piney Woods School in Mississippi in 1937, the band was comprised of African American, mixed race, Latina, Asian, and Native American girls who toured nationwide to promote the school and to raise funds. In 1941, the band split from the school to join the musicians’ local in Washington, D.C. and white musicians were recruited with the understanding that they’d have to “pass” as black women to perform in the segregated Jim Crow South.

“The whole point of the Sweethearts is that the school said, ‘We’re going to train African American women for something other than housekeeping,’” says Leigh, referring to an era when African Americans in the U.S. were fighting for basic civil rights and few job options were open to women, irrespective of race. The Sweethearts’ commitment to jazz and personal independence made them feminist and civil rights symbols. They broke attendance box office records nationwide, played “Battle of the Bands” competitions against men—and won—and were the first all-female big band to tour France and Germany for the USO. In a 2011 NPR interview “America’s Sweethearts: An All-Girl Band that Broke Racial Boundaries” Sweethearts saxophonist Roz Cron described her experience leaving home in Boston at age 18 to join the group.

Even though the SJMO women don’t have Jim Crow laws to evade, or as grueling a travel schedule as the Sweethearts did (like the 60 days of one night performances in half a dozen Southern states in 1943), the women claim they sometimes envy the unity and freedom they believe jazzwomen felt during the World War II years. When the men were away, women could “just be musicians,” and fan appreciation resulted in box office records like the one the Sweethearts set at the Howard Theater in Washington, D.C. in 1941 when they attracted 35,000 patrons in one week.

Times may be better, however, but some battles still die hard. The women say they still find people who consider it unfeminine for girls to play brass or percussion instruments. Jen, a southern California native and the youngest of three girls, still remembers the gender bias she faced in third grade when her mother took her to select her instrument. “I said, ‘I want to play the trombone.’ The music store owner said ‘That’s not a very good instrument for a little girl. What about the flute or a clarinet?’ I said ‘Absolutely not. If I can’t play trombone I will play the trumpet.’”

Even these days it’s typical for middle school music classes to have girls comprise one-third to half of the enrollment, only to have that number drop to two or three individuals in high school. The SJMO women posit that the reason for the decline in the number of girls involved in playing music in high school and college is that by then subtle or overt messages have been communicated that girls get more dates and social acceptance if they’re not outplaying the boys on the bandstand. Nevertheless, Liesl smiles as she recalls stealing her brother’s trumpet in eighth grade to challenge the lone trumpet player in her school band.

She won his spot. 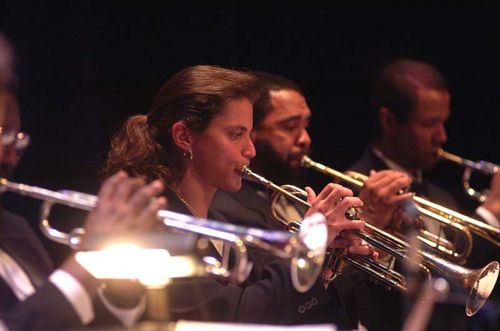 The SJMO women credit loving families and mentors for helping them through the obstacles. They named their parents, childhood music teachers, and musicians like jazz pianist/arranger Bill Potts and SJMO saxophonist Charlie Young, among others, as role models.

Jen and Liesl come from military families where leadership and independence were encouraged. Both serve in the military, performing with the Navy Band Commodores and Army Jazz Ambassadors jazz ensembles, respectively, and both balance their careers with raising a family. (Leigh is a civilian, but she is married to a trumpet player in the Commodores.) Speaking of marriage led the women to address another gender issue in jazz—sexual orientation.

Female instrumentalists, especially brass and percussion players, are often subject to stereotyped speculation about their sexual preference, in a way that male musicians are not. If the female musicians are not assumed to be gay, they’re likely to be hit on. Woman musicians may also receive unwanted attention if they’re pregnant, or be pressured to dress up “like Barbie dolls” for CD covers.

Still, the rewards of playing music are worth the occupational trials, the women declare. “Playing an instrument, for any child, is rewarding,” says Liesl. “It’s developing another skill.” Many younger musicians, male and female, don’t believe they need role models. “But they do,” contends Leigh. “It would be good for them to see more women playing, and not second guessing themselves.”

Jen had these reflections about her early role models, including her mother and her music teachers from kindergarten through high school: “They all pushed me hard and were less lenient with me than others in the group. I think that was my personality. I thrived on being pushed,” she says. “In kindergarten when the music teacher came to our class I relished feeling that she was coming for me. It was my favorite time of the day.”

Jen, Leisl, and Leigh will perform at the SJMO’s sold-out final concert of the season on June 16: Count Basie Sings, Joe Williams Sings.