Girl Scouts has been an experience passed from one generation to another for a century. In this, the final part of our series of blogs from museum staff relating their Girl Scout memories, Debbie Schaefer-Jacobs recounts her family’s involvement with scouting, spanning nearly 70 years.

My mom (Jeanne Koch Schaefer) had been a Girl Scout in Rutherford, New Jersey during World War II. She signed me up for Brownies and was immediately drafted as a leader. We met in the Franklin Elementary gymnasium in East Rutherford every Wednesday during the school year. We only missed one meeting—the day my mom gave birth to my brother Dave when I was in third grade. My mom was able to buy me a new uniform for Brownies but I remember there was a closet in the school with a box for used uniforms to go to girls who couldn’t afford new ones. When I “flew up” to Juniors, I put my old Brownie uniform in that box.

My mom saved her Junior book and some of her proficiency badges—it was interesting to compare her badges to those that I was earning. As a Junior, I served on the leadership council as an officer in the troop. We met every other week at dinnertime to plan out the troop’s activities. We brought sandwiches or TV dinners in foil trays and planned our service projects, arts and crafts projects, field trips to local museums, and the occasional camping trip. 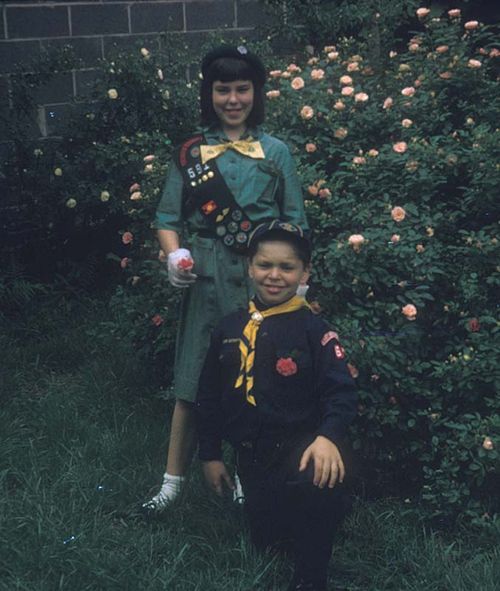 Debbie and her brother Doug pose in their scout uniforms right before marching in a Memorial Day parade in 1965.

As a suburban troop, we focused much of our time on arts and crafts. I made a “sit-upon” out of green vinyl tablecloth material, yarns, newspapers for stuffing, and yellow electrical tape for my name and troop initials. I had that sit-upon until I became a leader myself and gave it to one of the girls in my troop.

We also played lots of games. One of our favorites involved two teams. One would lay a trail with sticks and rocks in the neighborhood and the second group would have to follow the signs to the final meeting place where we would share a treat or have a picnic. This was before cell phones so the leaders of the two groups would agree on a meeting place in case the trail signs were disturbed or hard to follow. My daughter (Alexandra Elizabeth “Lexi” Jacobs) and her troop played the same game in our Virginia neighborhood.

When Lexi was in first grade, I signed her up as a Brownie with the Layton Hall Elementary School troop in Fairfax, Virginia. When I bought her uniform, it was two sizes too big—with Lexi growing so fast, I was hoping I wouldn’t have to buy more than one. By the time she “flew up” to Juniors, she could barely fit into the uniform! 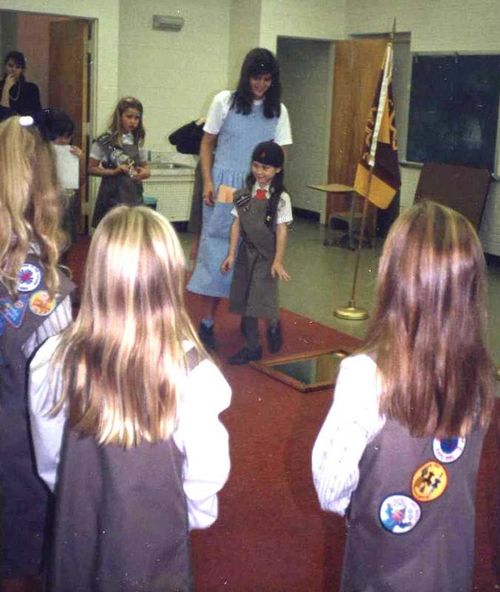 Lexi’s investiture as a Brownie at Layton Hall Elementary School.

Lexi says her fondest memories of Brownies are of cookie sales in the neighborhood. Her best friend attended a different school and was a member of a different troop. The cookie sales were something both girls could do together. They would take turns ringing doorbells and they kept track of their best customers so they would be sure to reach them if they weren’t home. Together, they delivered the cookies in a red wagon with one of their parents in tow. She also remembers working on as many Brownie “Try-It” badges and Junior achievement badges as her schedule permitted and was proud of her colorful Brownie sash and Junior vest.

By the time Lexi was a Junior, I was a co-leader for her troop. I spent several Saturdays and evenings attending training given by the Girl Scout council before the troop was allowed to participate in field trips and other events. The training related to safety, filling out forms, and good organizational practices. Girl Scout training was much more extensive than other youth groups including the Cub Scouts but as a result, everything seemed to run much smoother. Dads certainly helped too—they were often pressed into carpool duty or delivery of camping equipment and supplies. 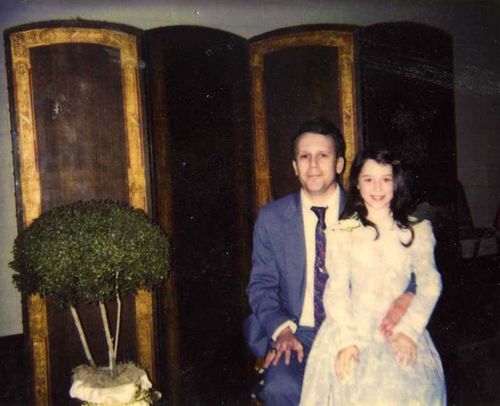 Lexi and her dad at the Girl Scout’s father / daughter dance.

By the time Lexi was a Cadette, I was only helping out with cookie sales and on special occasions. Her troop was a combination of Cadettes and Seniors from different schools and met less frequently as other activities would compete for their time. They ran their meetings with minimal adult guidance and voted on what they would do as a troop. Her troop participated in a Girl Scout Day at the National Museum of American History, although as the daughter of a staff member, Lexi had been helping out at these events for several years. Cookie sales were still part of troop fund raising but philanthropic and community service projects often served double duty with church or school projects, as the girls learned time management skills. They also had a taste of gender inequity when they discovered that completing a silver level in Girl Scouts was similar to the work put in by Boy Scouts for attaining their Eagle Scout status. When it came to a Girl Scout Gold project (the highest achievement in Girl Scouts), there were considerably more requirements, documentation and follow up responsibilities—the reality of life and the glass ceiling!

Tim Winkle, editor of this blog series, is an associate curator with the Division of Home and Community Life at the National Museum of American History.