It's getting "hot" in here

The 11-day heat wave of summer 2012 that had residents of DC and much of the nation sweltering has finally ended. Interns at the Smithsonian were warned about D.C.’s notorious heat and humidity when we first moved here in June, and having now experienced it, we’ve been officially initiated into a Beltway summer– a baptism by fire if you will. 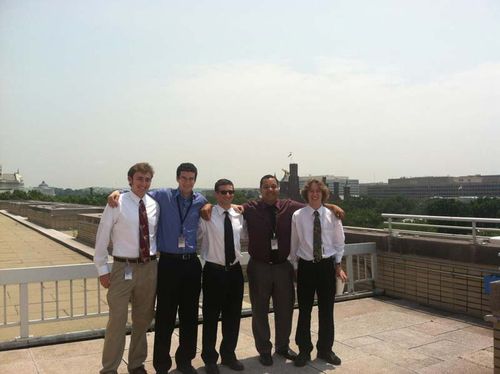 However, despite the cooler temperatures, the 4th floor research rooms of NMAH are still hot with the sounds of jazz. Dr. John Hasse’s team of 5 interns have delved into this world, researching the Jazz Wars project, which analyzes controversies and differing perspectives of jazz and its socio-cultural significance. Part of our task has been to read music magazines and other primary publications in order to gather an accurate sense of this music as it existed in historical time, and the stories being uncovered are quite thrilling.

Before the term “jazz” became popular, this music was referred to as simply “hot”, and that word has a long history in jazz culture. Louis Armstrong’s first band, formed in 1925, was the Hot Five, and his infamous Hot Five and Hot Seven Sessions have gone down in jazz history as the first recorded glimpse into the musical genius that would define Armstrong’s career. In 1931 a jazz appreciation society formed in Paris called the Hot Club de France, and Billie Holiday declared in the 1937 Count Basie-backed number “Swing Brother, Swing” that “hot rhythms stimulate me.” 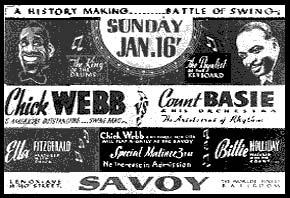 Flyer promoting battle of the bands at the Savoy Ballroom.

That particular song was part of a live radio broadcast recorded at the Savoy Ballroom, birthplace of the Lindy Hop and hotbed of jazz activity in 1920s and ’30s Harlem. The Savoy was one of the few integrated nightclubs in New York at that time, and hordes of jazz enthusiasts from all social backgrounds crowded the hardwood floor to dance the night away to the best jazz and swing performers. Many of these bands faced off in what were called “cutting contests” and on the wintry night of January

Feb 1938 Downbeat article describing the cutting contest.
16, 1938, the Savoy was decidedly the hottest place in Harlem as drummer Chick Webb and his big band battled against Basie and his orchestra. Representing the vocal side of Webb’s band was Ella Fitzgerald, who Downbeat magazine reported as having the “whole crowd rocking with her” when she sang. Basie’s vocalist was Holiday, who “thrilled her fans” with her unique vocal stylings. Adding to the heat of the night was Benny Goodman’s band, including drummer Gene Krupa, who arrived after playing their own concert at Carnegie Hall, and Duke Ellington, who wound up swinging along with Basie on the piano after being persuaded to play impromptu. Both bands dazzled the crowd but Webb’s band emerged on top; however, everyone who experienced this tour de force of jazz left a winner.

Norma Miller, a member of Whitey’s Lindy Hoppers, the Savoy’s resident dance troupe, recalled this battle of the bands in her memoir Swingin’ At The Savoy, stating “everything was jumping, the floor was crowded with dancers.” Those dancers, much like the Smithsonian’s interns, were probably sweaty and knew a thing or two about what was “hot.”

James Padilioni is a Jazz Research Intern at the National Museum of American History.