Joseph Henry and the origins of American seismology

The earthquake that ejected us from our offices last summer led me to take a new look at the collection of seismic instruments in the National Museum of American History, and at the role that Joseph Henry, the Princeton physicist who became the Smithsonian’s first Secretary, played in the development of American seismology. I knew that Henry understood his charge to include the promotion of science, but I hadn’t appreciated his interest in this field. A quick look at his papers showed that in the late 1840s, when Congress authorized funds for a scientific expedition to the southern hemisphere, Henry offered to purchase a seismometer to be used along the coast of Chile, an area that he saw as “peculiarly favorable to the study of the facts connected with one of the most mysterious and interesting phenomena of terrestrial physics—namely the earthquake.” This seismometer would be made according to the designs and under the supervision of James David Forbes, an Edinburgh physicist with whom Henry had long corresponded.

In an effort to encourage more Americans to observe seismic phenomena, Henry published a “Circular Relative to Earthquakes” in the Smithsonian Annual Report for 1855. Since sophisticated apparatus was scarce, he suggested here that a bowl filled with molasses or other viscous fluid would serve as a simple seismoscope showing the direction of the earth’s tilt. After an earthquake devastated parts of San Francisco in 1868, Henry noted that the Pacific Coast would probably furnish an “admirable locality” for studying seismic phenomena and urged savants to “give special attention to the subject.” And he urged philanthropists to include apparatus for observing physical phenomena in the astronomical observatories that would bear their names.

It is thus not surprising that, when it opened in 1888, the Lick Observatory on Mount Hamilton, east of San Jose, California, boasted a set of seismographs (along with what was then the largest refracting telescope in the world) bought from the Cambridge Scientific Instrument Company. These had been designed by James Alfred Ewing, a young Scottish physicist/engineer who had become interested in the subject while teaching in Tokyo. One was a duplex pendulum instrument that recorded the two horizontal components of earthquakes. Ewing boasted that it was “comparatively cheap and simple” and “employed by many private observers in Japan.”

Edward Holden, the first director of the Lick Observatory, was eager to organize a community of seismologists in and around California. To that end, he convinced Paul Seiler, head of an electrical apparatus supply firm in San Francisco, to manufacture duplex pendulum seismographs that would sell for $15 apiece (the comparable English instrument cost $75). Over a dozen examples of these California instruments were distributed across the country and around the world, and observations made with some of them were reported to Holden and his assistants at Lick. 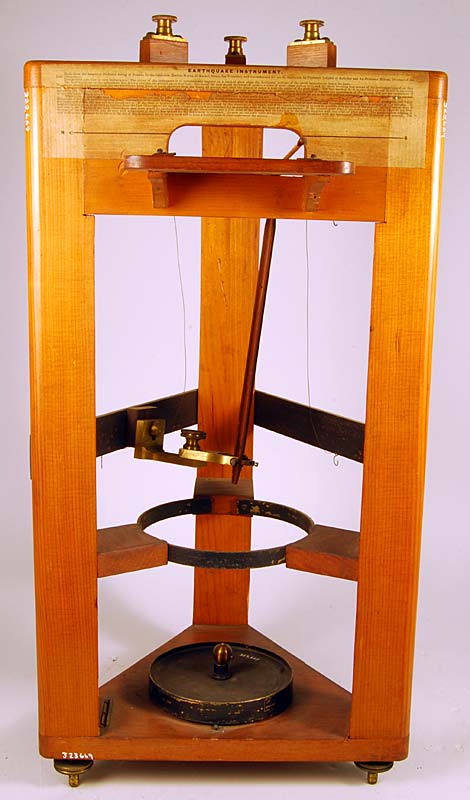 The National Museum of American History has an instrument of this sort, a gift of Case Institute of Technology in Cleveland, Ohio. It carries a paper label marked: “Made from the Designs of Professor Ewing of Dundee, by the California Electric Works, 35 Market Street, San Francisco; and recommended for use in California by Professor LeConte of Berkeley and by Professor Holden, Director of the Lick Observatory.” It stands as a silent reminder of origins of American seismology, and of the important role that amateurs have played in this as in so many scientific endeavors.

Deborah Warner is Curator of the Physical Sciences Collection at the National Museum of American History.