My encounter with the V-Nickel 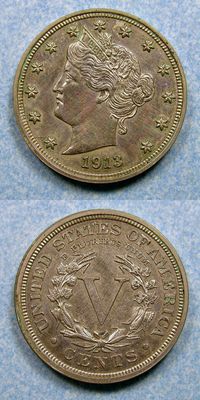 Obverse and reverse of
1913 V-Nickel

What makes numismatists (coin collectors) fascinating are the historic tidbits that each collector appears to absorb through osmosis. Listen to the conversation of coin experts—someone mentions a date and a denomination and the rest of the group can visualize the coin, where it was minted, and tell you its significance to world events. They all know the stories about mint “mistakes,” rarities, and the unexplained mysteries. Numismatists are a community joined together by their shared knowledge.

While organizing the offices of the museum’s National Numismatic Collection (NNC), I discovered five three-ringed binders that contained clippings of “Curiosities of Currency” written and illustrated by Stuart Mosher for the Buffalo Courier Express between 1931 and 1936. Since Mosher was curator of theNNC from 1948 to 1956, it is possible that these notebooks were put together by the author himself. Each week’s article was cut from the newspaper and backed on a now grayed piece of construction paper. The books are pure research gold (please permit the pun!) for catching a glimpse of the weird and wonderful facts most numismatists know.

Browsing through Mosher’s book, I came across the headline, “Liberty Head Nickel, 1913 Date, Is Rare Recent Coin.” Mosher’s article of 1933 informed his readers that in a private sale, all five 1913 V-Nickels sold to “a well-known coin collector” for $500 each. 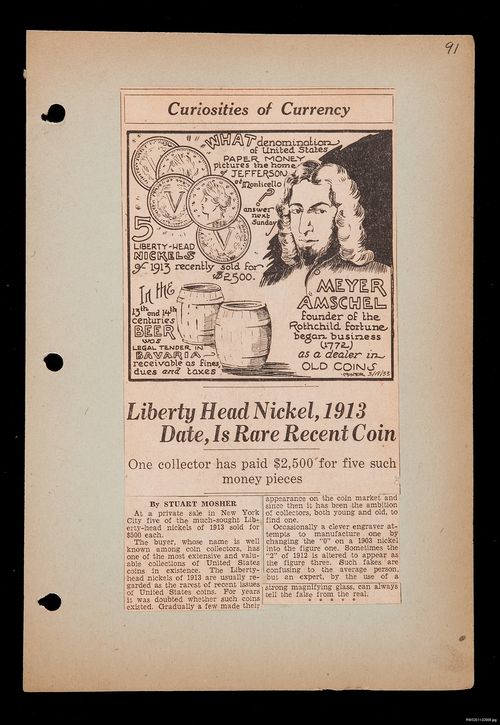 A page from the Notebook of Stuart Mosher 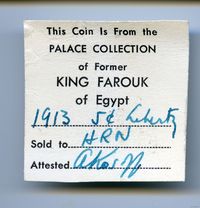 I smile whenever I read about the five Liberty Head nickels because I know their history and their legends. In my position—Collections Manager for the NNC—I am responsible for one of the five nickels, named for its most famous previous owner, the “King Farouk” (king of Egypt and the Sudan 1936-1952). In 2009 I was part of a team that took the “King Farouk” nickel to the American Numismatic Association’s (ANA) exhibition, World’s Fair of Money in Los Angeles. Four of the five coins were united for that exhibit. I witnessed grown men in tears after viewing the four coins. My connection to the 1913 nickel brings me closer to the numismatic community.

For those not in the know, a quick summary is in order. The first nickels (worth five cents and made from a nickel-copper combination like the contemporary nickel) were made in 1866. The first design was a shield on the obverse and the number “5” on the reverse. In 1883 the design of the nickel was changed to a Liberty head on the obverse, and a “V” (Roman numeral five) on the reverse. The Liberty Head or “V-nickel” design was in use until 1912. The V-nickel design was replaced by the Buffalo Head nickel in 1913. It is a numismatic mystery: why do five specimens of V-Nickels dated 1913 exist? Though the many possible explanations give numismatists fodder for thought and conversation, the truth remains a mystery.

What we know is that the nickels were unheard of for seven years. Then in 1919, Samuel Brown, an ex-mint employee, advertised that he would purchase any V-Nickels dated 1913 for $500 each. A lot of money to spend on a nickel. A media buzz was created. Everyone wanted to find a 1913 nickel and be rich! Children searched their parents’ pocket change and deep cushions in the family sofa suddenly held potential as a repository for wealth. Ironically, after starting the buzz, it was Samuel Brown himself who found and displayed (at the ANA convention of 1920) the only known 1913 V-Nickels. Although Brown never purchased a V-nickel, he sold five nickels as a set. In 1933 Stuart Mosher said, “The Liberty head nickel of 1913 is usually regarded as the rarest of recent issues of United States coins. For years it was doubted that such coins existed. It has been the ambition of collectors, both young and old, to find one.” Presently the coins are owned individually by museums and private collectors. The highest price fetched for a V-nickel to date is $5 million, sold at auction in 2007. 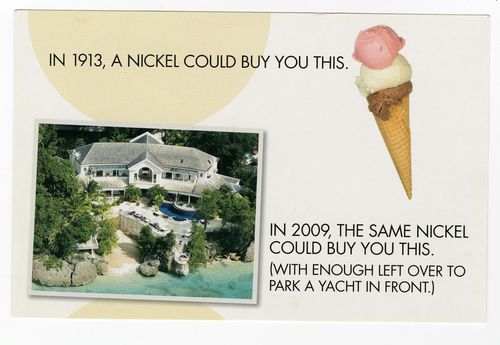 As I turn the page of Stuart Mosher’s scrapbook, I am intrigued to read the next numismatic, quirky historical tidbit. The story is titled, “Cheating in Money Coining Began Early in This Country, One producer made 135 half pennies from pound of copper.” Each page of Mosher’s articles guides my path as I venture into the world of Numismatics.

You can view one of the five 1913 V-Nickels and learn more coin legends at the musuem’s exhibition,Stories on Money.