The greatest fair that never was

Editor’s note: This is the first of two posts on the planned 1942 World’s Fair. This post originally appeared on Bright Ideas.

I find displays of invention endlessly intriguing. This year marks the 70th anniversary of one of the most extravagant exhibitions that never happened. Yet I feel like I was there to see it. I can envision the colossal Arch of Empire, 790 feet in height, spanning 1,968 feet, illuminated like an iridescent rainbow—not Eero Saarinen’s Gateway Arch in St. Louis, but its even grander forerunner in Rome in 1942. Designed by Pier Luigi Nervi, Adelchi Cirella, and others to rival the Eiffel Tower, it was to serve as the grand entrance to Benito Mussolini’s ultimate World’s Fair. 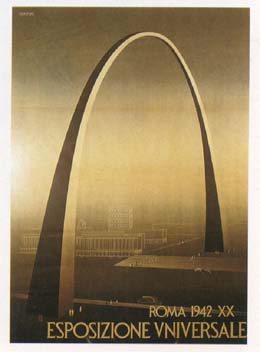 The extravagant “Arch of Empire”.

The Esposizione Universale di Roma, scheduled to open in 1942 and dubbed E42, was to celebrate twenty years of Fascism and the revival of the Roman Empire. Under the direction of Marcello Piacentini, Mussolini’s chief architect, EUR, named with the initials of the exposition, was designed to be an ideal suburb, with showcase Fascist buildings and an elaborate system of lakes, parks, and gardens, extending Rome toward the sea, a long-cherished dream of Mussolini. Though E42 was canceled due to the War and the Arch existed only on paper, a vast body of records in the State Archives in Rome testifies to the grandiose visions of its Fascist planners, as does the Roman district of EUR that was conceived with the original plan and partially completed after the War.

The fair’s inflated subtitle, “Olympiad of Civilization,” may have suggested international cooperation and harmony, but it hardly masked Il Duce’s real ambitions. Beneath the surface of E42 was an internal tension between the glories of ancient Rome, which Mussolini famously attempted to recapture, and his modern Fascist revolution, which he claimed would eclipse even the Caesars. The attempt to merge past, present, and future was a core dynamic of E42. Foremost on the Fair’s agenda was the patriotic display of science, technology, and invention. Fascist ideologues believed that Italy’s time had come, that it had a special advantage in its union of art, technology, and science. And, though it had not done much so far in the 20th century (too bad the great atomic physicist Enrico Fermi had gone to America to work on the Manhattan Project) historically speaking , it still had an unbeatable team with the likes of Leonardo, Galileo, and Marconi. According to E42’s planners, the Arch and the Fair would “be of vast proportions…of the highest Technical Italian Art…the grandest conception in the field of Technique and Mechanical Art.” 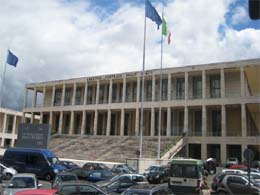 This ideology came to life for me last month during a research trip to the State Archives in Rome. To sample just a few of the documentary treasures, I perused plans for E42’s science and technology exhibits and for a Museum of Science that was to provide a permanent home for the artifacts once the Exposition closed; Leonardo was of course accorded hero status. Equally intriguing were engineering and design drawings as well as propaganda justifications for the Arch of Empire and other emblematic structures. The documents also exude other telling signs of the era, such as the constant litany of servile invocations of Mussolini’s name: “Mussolini has decreed it; Let it be done.”

Heightening my sense of historical immediacy was the location of my research: the State Archives occupies one of the original iconic buildings of EUR, anchoring one end of the major axis of the district. As I immersed myself in the records of E42, I could feel the ideological message in the overblown but faded grandeur of the building itself. And to drink in more of it, all I had to do was stroll the neighborhood. EUR is overrun with monumental, marble-cladded buildings in the Fascist style, such as the famed Palazzo della civiltà del lavoro (Palace of working culture), usually called the “Square Colosseum,” for its almost beautiful geometric rendition of Rome’s most famous monument. Not an unpleasant place, the EUR district is very much alive today, with the construction of new buildings, parks, and lakes somehow still “fulfilling” Mussolini’s dream of a futuristic green utopia. 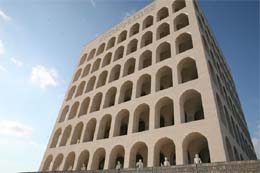 The “Square Colosseum” at EUR.

However, in walking EUR, I also had a sense of déjà vu; I had seen this before, but from quite another perspective. If you are a fan of Italian art films as I am, you may remember EUR as one of the backdrops in Federico Fellini’s La Dolce Vita (1960). You may also recall EUR from Michelangelo Antonioni’s Eclipse (1962), where it is virtually a character in itself, but of an ominous sort. Far from signifying utopia, it serves as a sterile symbol of post-war alienation and anxiety. It is a utopia gone sour. In one memorable scene, a fretful Monica Vitti appears in the shadow of a looming water tower, called Il Fungo, for its mushroom-like form, evoking either War of the Worlds aliens or, as some say, an atomic mushroom cloud, an especially scary image in the year of the Cuban Missile Crisis. (Il Fungo, by the way, still exists, but now more benignly as a five-star roof top restaurant.) 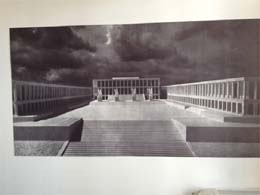 Image of the planned building that now houses the State Archives.

These powerful films have created an unforgettable, yet one-dimensional image of EUR. In the archival records of E42 I glimpsed a more complex story illuminating the original vision, ideals, and ideologies behind the Exposition and the Roman district it spawned.

Art Molella is the Jerome and Dorothy Lemelson Director of the Lemelson Center for the Study of Invention and Innovation.