One of the earliest images of baseball is this hand colored lithograph of Union prisoners at Salisbury Confederate Prison. It is part of the Harry T. Peters “America on Stone” Lithography Collection at the National Museum of American History. Though various forms of baseball were played in England and America for over a century prior to the Civil War, modern rules of the game were not developed and employed until the 1850s. The evolving Knickerbocker Code or rules had its origins in metropolitan New York in 1845. Union soldiers, more familiar with the game, introduced others, including Southerners and Westerners to baseball throughout the Civil War, resulting in thousands of soldiers learning the game. Upon returning home, the game spread to friends and neighbors and soon the sport was played in every region of the country, solidifying its title as “The National Pastime." 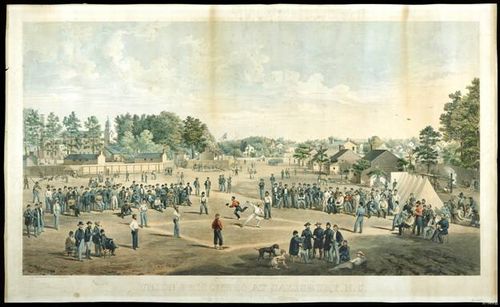 The baseball game pictured in this print was played at Salisbury Confederate Prison in North Carolina. Between December 9, 1861 and February 17, 1865, the prison housed 10,000-15,000 Union prisoners of war and other assorted detainees. The compound was designed to temporarily hold Union officers until they could be exchanged for Confederate troops. The facility was constructed around an empty 20 year-old brick three story cotton factory on 16 acres of land near a railroad line and the town of Salisbury. For the first couple of years of its existence, the prison had wells of sweet water, adequate medical facilities and sufficient food.

Soldiers’ diaries document the detainees’ daily routines and pastimes. Prisoners from the first half of 1862 noted that baseball games were played nearly every day, weather permitting. For the first couple of years, prisoners were also permitted to whittle, read, write letters, attend lectures, perform “theatrics,” play cards such as poker, and go fishing. Prisoners also gambled, as is evidenced by the dice game underway in the lower right corner of the print. Prisoners even published their own newspaper. Some prisoners were given town visitation privileges, so it was not uncommon for POWs to trade buttons and barter small personal items for fresh fruits and vegetables.

As the war continued, conditions began to deteriorate. After the summer of 1862, prisoner exchanges ceased. Records indicate that few Union prisoners were held in the prison in 1863 and early 1864, but the facility was used for Southern political prisoners, conscientious objectors, Confederate deserters and Southern civilians that ran afoul with the authorities. As the war dragged on, food and medicine became scarce for both prisoners and guards. By mid 1864, the prison filled up with Union POWs of every rank. Later that year, the camp exceeded its capacity and become overcrowded. Living conditions deteriorated further and life in Salisbury prison became as miserable as other prison camps. The mortality rate jumped from a low 2% to devastating 28% ; an estimated four to five thousand men died. Finally, on February 17, 1865, the Confederate and Union governments announced a general POW exchange and more than five thousand prisoners left Salisbury.

The baseball game pictured in the print was played during the late spring or summer of 1862, before living conditions deteriorated and when prisoners still had a good chance of leaving through a prisoner exchange. The baseball players on both teams are POWs, possibly men previously held in New Orleans and Tuscaloosa, as they were known to have played at the camp during this time. Although guards occasionally joined in the games, it is not reflected in this print. Spectators included townspeople as well as guards, and two guards (center and center far left) are pictured with guns. The town is depicted in the background beyond the stockade or wooden fence. A red, white and blue flag flying overhead in the center of the print is probably a Confederate regimental flag, though it could possibly be an error on the artist’s part with a reversal in the colors of the North Carolina Confederate flag. The prison compound included small cottages, a meat packing plant for the Confederate Army, a blacksmith shop and a small hospital.

The artist of the original watercolor sketch used for the lithograph was Otto Botticher or Boetticher (1811-1886). Botticher was a Prussian immigrant and held the rank of a Union captain when he was captured on March 29, 1862 around Manassas, Virginia. Prior to the war, Botticher had been a portrait painter in New York and New Jersey. He produced several paintings and lithographic plates of military subjects with the aid of early photography using daguerreotypes and ambrotypes. His work displays precision and excellent attention to detail, indicating he likely had formal draftsmanship training. Botticher may also have attended a military school and/or been a member of the army in Prussia, according to his biographer, Seward R. Osborne. He was known as Major Otto Botticher prior to the Civil War. In July 1861, Botticher joined the 68th New York Volunteer Infantry, known as the Cameron Rifles and was given the rank of captain. After his capture, he was sent first to Libby Prison near Richmond, where he sketched “Libby Prison- Union Prisoners at Richmond, Va.,” also produced by Sarony, Major & Knapp and Goupil, Co.. When he was transferred to Salisbury Prison, he produced the watercolor that was used to create this lithograph. He was released as a result of a prisoner exchange on September 30, 1862 at Aiken’s Landing, Virginia, when he was exchanged for a Confederate captain from Virginia’s 7th army. Botticher rejoined his regiment, serving as captain of Company B at the Battle of Chancellorsville. He was wounded at Gettysburg while serving with his regiment in the 11th Army Corps, and was discharged in June 1864, but achieved a brevet rank of lieutenant colonel with the New York State Volunteers in September 1865. After the war, Botticher continued as an artist, illustrator, and lithographer. He also worked as a consulate agent for the North German Union before dying in 1886.

Botticher’s watercolor sketch of the Salisbury Confederate Prison baseball game was used to create the lithographic print in 1863. The lithographic firm was Sarony, Major & Knapp of 449 Broadway, New York City. The firm was founded by Napoleon Sarony and Henry B. Major in 1846; Joseph F. Knapp joined the firm in 1857. Sarony, Major & Knapp earned a solid reputation for lithography and the company was especially known for its fine art chromolithography. Unfortunately, by the 1870s, the firm shifted focus to the more profitable area of advertising. It also expanded to become the conglomerate known as the American Lithographic Company, successfully producing calendars, advertising cards, and posters. In 1930 they were bought out by Consolidated Graphics.

This print was produced and promoted 1863 by Goupil & Co. or Gouipil & Cie, a leading international publisher, printer, and fine art dealer. The company was founded in Paris by Jean Baptiste Michel Adolphe Goupil (1806-1893) and his wife Victorine Brincard. The Goupils widely promoted art and owned exclusive galleries as well as common sales rooms in New York, Paris, London, The Hague, Brussels, Berlin, and Vienna. Through various partners they had considerable resources and were able to capitalize on the interest in the newly popular American game. This ready-made market proved lucrative as the print sold well overseas. While the print does picture a pro-Southern view of leisure in a Confederate prison camp, it was also popular in the North for the images of Union officers and of course for the depiction of a baseball game in progress.

Debbie Schaefer-Jacobs is an associate curator in the Division of Home and Community Life at the National Museum of American History, and curator of the division’s Harry T. Peters America on Stone Lithography Collection.