Editor’s Note: Today’s guest blog is written by Philadelphia Cousins, who is Julia Child’s niece. On August 15th, the National Museum of American History will celebrate Julia Child’s 100th birthday with a special birthday surprise, followed by a two week sneak preview of her famous kitchen in its new home.

This kitchen holds so many memories… 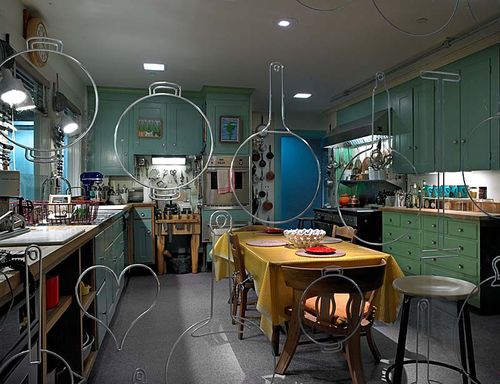 Growing up, I had heard stories about my Aunt Ju-Ju from my mother Dorothy, Julia’s sister, and my father, Ivan. We received post cards and gifts from “J and P” from far-off places like Germany and Norway. In 1962, I saw Julia and Paul in Sausalito, California, when she, Paul, and Simone Beck came to stay with us on a book tour for Mastering the Art of French Cooking, and, of course, weekly on PBS. But it was not until I came to Cambridge as a freshman at Radcliffe College in 1969 that I really came to know Julia and Paul and spend time in their spacious kitchen, full of copper pots and intriguing culinary equipment and redolent of buttery, spicy, wonderful scents.

My gastronomic and culinary education then began in Ju-Ju’s kitchen. Several times a semester I was invited over for dinner, which was a ritual. I knocked and entered from the back door. Julia came down the stairs: ”Hello dearie! Come in!” Kisses and hugs. Sometimes I came alone, sometimes with my family members, college roommate Anne Ludlow Watson, friends like Alan Heppel , Diane Coggan or Jamie Carroll, or boyfriend, Bart Alexander. Once in the kitchen, Julia went straight to the stove, as she was always in the midst of preparing dinner. The table was set on the Marimekko table cloth with bright ceramic dishes from the Provence. I greeted Paul with a hug and kiss and he then took aperitif orders and disappeared into the pantry, a narrow room with mahogany cabinets and shelves, to prepare the drinks. We gathered around the table and discussed the events of the day, political goings on. Early on, Paul would exhort me to use the word which exactly conveyed the meaning I intended. ”Semantics!!”

The dinner guests were varied and always fascinating: many relatives, Harvard professors like Dorothy Zinberg, old friends from the OSS days, WGBH folk like the Morashes, wonderful friends like Avis DeVoto, Pat and Herbert Pratt, Bill and Mimi Truslow, Geof Drummond, Nancy Cobb, Susy Davidson, and culinary folk like Jasper White, and many more. Conversation was lively and above all, everyone had FUN.

Julia was chatting to all there and cooking and would then say, “A table. It’s time for dinner.” We had a first course, often something she was working on for a cookbook or show. I particularly loved it when she was testing out puff pastry, with aromatic cheeses, sometimes some ham. And Paul always supplied the perfect white wine. He particularly loved white Chateauneuf-du-Pape. Then on to the main course with a delicious salad, veggie and red wine, red Burgundies being a favorite accompaniment. Dessert was often simple, sometimes fruit and cheese, sometimes a cake or tart being tested out. Then we retired to the living room for a digestif and coffee. At 10:15 precisely, the lights clicked off on a timer, which signaled that it was time to leave, which was done with hugs and kisses all around. 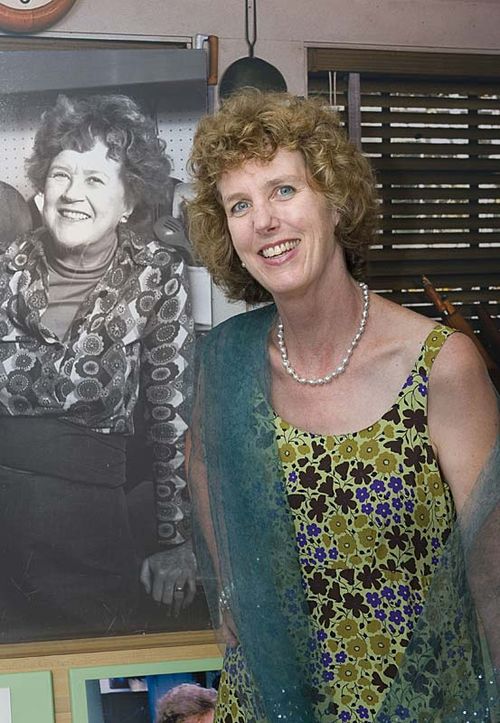 Phila Cousins with a photo of her aunt, Julia Child, at the Smithsonian’s National Museum of American History, August 2009.

As I spent more time in the kitchen, Julia slowly began to give me tasks to do: making the vinaigrette, chopping the onions, washing out this or that pan, “Clean up as you go along!!”

In later years, I would visit with my husband, Bob Moran, and son, Nick, and we spent many a happy hour in the kitchen over breakfast with aromatic Chinese tea and lunches which were often ingenious combinations of leftovers and more dinners. Often en famille, the dinners were simple: fresh ingredients, beautifully prepared. We came to know Julia’s devoted assistant, Stephanie Hersch.

Paul had his wine stored in a corner of the enormous full basement, but had a meticulously kept chart of wines stored and consumed up in the mahogany pantry. The chart was hand-written by Paul in his beautiful script and listed each wine and had a square for each bottle of the wine on each line of the chart. As bottles were consumed, Paul made an “X” in the appropriate square. All was done in pencil and the pencil hung by a string next to the chart.

After Paul had died, the last wine chart hung in the pantry until Julia left the kitchen in 2001. Nick, our son, when about 3 years old discovered the wine chart while roaming around the house. All he saw was a pencil and a big piece of paper and promptly, and to my horror, scribbled all over the last wine chart. Luckily the highly skilled team members at the Smithsonian who were in charge of the kitchen exhibit were able to restore the wine chart minus Nick’s “art work…” I think a copy of the chart still hangs in the exhibition.

There was an extremely amusing incident in the kitchen involving my brother Sam’s son, Max Cousins. His mother, Sue Kennedy, remembers that Max loved to sneak tablespoons of sugar from Grandmother’s silver sugar bowl, which sat after breakfast on the butcher block counter with the tea. Julia noted this and secretly exchanged the sugar for salt. With Julia watching in the wings, Max cruised in and grabbed a tablespoonful of what he thought was sugar and got a big surprise. He never touched the sugar bowl again.

Max and Nick, unbeknownst to the rest of us, had been sticking their gum under the wooden kitchen table before dinner for years. Alex Prudhomme tells me he used to do the same. Paul had also put years of Chiquita tags from his morning bananas on the underside of the table. The Smithsonian team found all of these relics when the kitchen was moved to the museum.

I remember the first time I saw the kitchen exhibit in August 2002. It was arresting to look in at the kitchen where I had shared so many meals with Julia, Paul, family and friends. Later, Nick and I brought two small paintings, of cats and an artichoke, by Rosie Manell, a great friend of Julia and Paul. We had been storing them in Colorado until the exhibit was ready to hang them. Nick and I went into the kitchen and put up the paintings: a very surreal experience to be back in the kitchen which was no longer a working kitchen at 103 Irving Street, Cambridge, MA, but an exhibit at the Smithsonian Institution’s American History Museum.

Memories of Ju-Ju’s kitchen abound. I hold in my heart the delightful and leisurely meals with lovingly prepared food and precisely chosen wines, the mouthwatering tastes and smells and the stimulating conversations. They are favorite memories which I will cherish always.