If you could ask one of the museum's experts a question, what would you ask? People around the world recently got that opportunity by taking part in Ask a Curator Day, a Q&A with museum curators that took place on Twitter on September 19, 2012.

An Australian tweeted us our first question before our curators' alarm clocks had gone off in the morning. Erika asked, "What object/artwork in your collection makes you laugh?" Assistant curator Tim Winkle's response: "There’s a simple hand-pumped fire engine in the collection, called a handtub, with a rather honest motto painted on the front: 'We’ll Try.'" Erika added the object to her "museums are fun" Pinterest board along with other items that crack up curators. 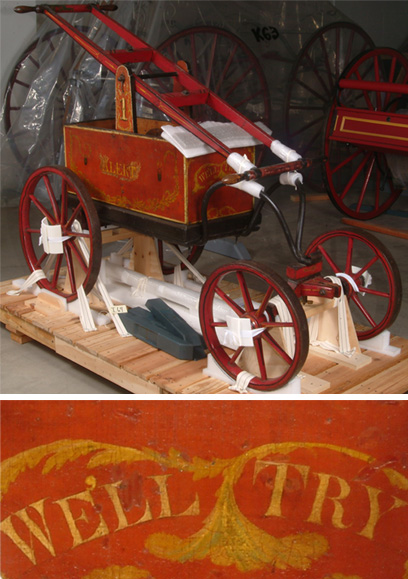 A few more selected questions from Ask a Curator Day:

Q: Earliest example of a prosthetic in the collection?
A: We have a gnarly peg leg from the Revolutionary War era—late 18th century.

Q: What is material culture?
A: Material culture is basically all the stuff in the world that you can touch, eat, and see that was in some way made or altered by people.

Q: What conservation work was done on Archie Bunker's chair?
A: Fortunately, the chair is still in great condition. It received some general cleaning and vacuuming. We also regularly examine objects to ensure that they stay in good shape.

Q: How early do your collections on disability themes go?
A: Early collections date from the 18th century. But every assistive device, including a cup for drinking or eyeglasses, has disability history potential.

Q: What in the collection would you save in a disaster?
A: "One of the decorated Stradivarius instruments. Not only are they very rare, they’re still played in performances," said Eric Jentsch, deputy chair of the Division of Culture and the Arts. But he also said that he would have a hard time leaving Oscar the Grouch behind.

Q: Who was the first Irish-American 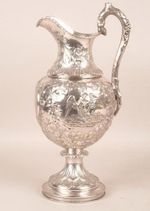 fire chief?
A: The earliest objects we have related to Irish-American firefighters are from the Hibernia Fire Company No. 1 of Philadelphia, Pennsylvania, organized in 1752. This was a Protestant Irish company, unlike the later Hibernia Hose Company in Philadelphia, which was organized by Catholic Irish immigrants. While not a fire chief, we have a silver trophy (image on right) from 1858, presented to Colonel James Page, who served as President of Hibernia Fire Company. Page was a militia commander, a veteran of the War of 1812, and a prominent figure in the public life of Philadelphia.

Q: What is an example of a very early surgical instrument in your collection?
A: We have several trephines from the Civil War era. A trephine is the round cutting instrument for boring a hole into the skull. They are made of brass and ivory. We also have a small number of scalpels and probes from Ancient Rome.

Q: How have Boy Scout uniforms changed over the years?
A: Today's Boy Scout uniform is certainly a bit more faithful to the original look than the Girl Scout uniform. A century ago, the first Boy Scout uniforms were closely based on the khaki military uniforms of the period. Badges, patches, leggings, puttees, campaign hats, and haversacks were all part of the quasi-military look. Today, the Boy Scouts still retain the khaki color scheme, though they have developed a style that is far less martial.

Q: How have Girl Scout uniforms changed?
A: The Girl Scouts also started out in khaki, creating their own somewhat military style for their girl adventurers. But in 1927, the Girl Scouts shifted to their familiar green color scheme, breaking with the military association of khaki. The green Girl Scout uniform been redesigned several times since 1927, often by major fashion designers like Mainbocher and Bill Blass. You can view the different looks for Girl Scout uniforms on display in the Museum’s temporary display Girl Scouts 1912-2012.

Erin Blasco is an education specialist in the Web and New Media Department. She has also blogged about the museum's dirty laundry.