All of the objects in the collections of the National Museum of American History are interesting and important in their own way, but few get their own date on the calendar to shine. Some objects may get one day a year—Washington's military uniform might be highlighted for President’s Day, for instance. But at least one collection gets an entire week—the firefighting collection—and that week is here again. 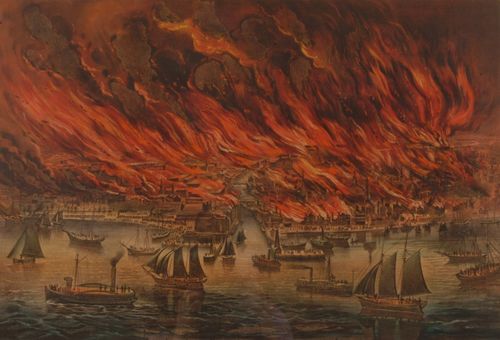 One of the many graphic art objects in the museum’s firefighting collection, this lithograph, produced by Currier & Ives, is a vivid depiction of the fiery devastation of Chicago on October 9, 1871.

Fire Prevention Week takes place each year around October 9th, commemorating the Great Chicago Fire of 1871 as well as the Peshtigo Fire in Wisconsin. Both fires started on the same day (October 8th) and while the devastation of the Chicago fire looms large in the popular mind, the fire that centered on Peshtigo, Wisconsin, stands as the most destructive forest fire in American history, destroying some sixteen towns and taking over 1,000 lives.

Fire Prevention Week began in the early 1920s as an effort to use the 50th anniversary of these two conflagrations to promote fire safety through public education. Since 1922, it has been sponsored by the National Fire Protection Association, a non-profit advocacy group that focuses on improving fire standards and codes while engaging in outreach and education about fire prevention and safety, often through their mascot, Sparky the Fire Dog.

The annual campaign usually has a theme focused on emergency planning and fire prevention in the home. This year, Sparky and the NFPA urge you to think ahead and “Have 2 Ways Out” in case of fire. While fires can happen anywhere, a fire in the home can be particularly devastating, quite literally hitting us where we live. Alongside the fire engines, uniforms, and equipment that relate to the profession (paid and voluntary) of firefighting, the museum’s collection also features objects that highlight the ever-present threat of fire in the home.

The NFPA began as an association of fire insurance companies in 1896, and fire insurance has a long history in America. In 1752, having already founded the first volunteer fire company in Philadelphia, Pennsylvania, Benjamin Franklin helped to organize the Philadelphia Contributionship for the Insurance of Houses from Loss by Fire, one of the first providers of fire insurance in the colonies. A home owner was issued a fire mark along with the policy, consisting of a lead icon mounted on a board which was then attached to the exterior of the insured property. 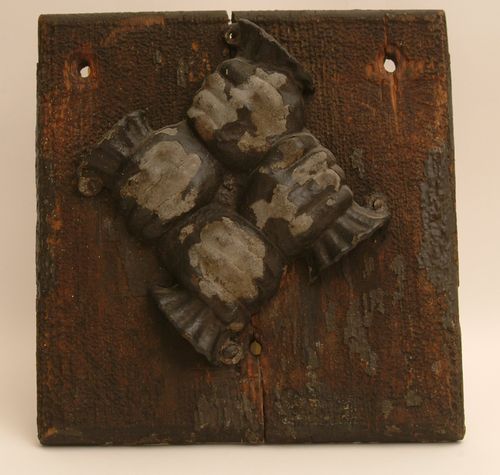 This fire mark is one of the oldest surviving examples from the Philadelphia Contributionship, dating to 1753. The hand-in-hand symbol represented the idea of mutual aid and assurance that was at the heart of the organization.

While we tend to think about fire insurance providing assistance after a fire, it could also be useful in fire prevention. Surveyors were sent to inspect properties to be insured, and companies made sure certain standards were in place before issuing a policy. For instance, the Philadelphia Contributionship did not insure houses with trees close to the building, as they were considered a potential fire hazard.

Leather fire buckets were a common household feature in the 18th and early 19th century. In fact, they were often required by law. City governments and town councils passed laws that obligated home owners to keep a number of well-maintained buckets (usually two) in their houses, and the by-laws of many volunteer fire companies also stipulated that their members have good buckets on hand or pay a fine. Certainly, a ready bucket could always help with a small domestic fire, but when the hue and cry of “Fire!” was raised, these buckets essentially became public property. Whether flung into the street to be collected by firefighters, or taken directly by their owner, the buckets would make their way to the site of the blaze, where they would be used to bring water to fill the reservoirs of simple hand-pumped engines. Bucket lines composed of men, women, and even children would snake to the nearest water source, with many hands passing full buckets down the line and empty ones back to be refilled. Once the fire was extinguished, these buckets would be brought to common area such as a town building or market hall to be claimed. For this reason, owners often painted their names and house numbers on their buckets to ensure they were returned. This would occasionally result in very decorative examples. 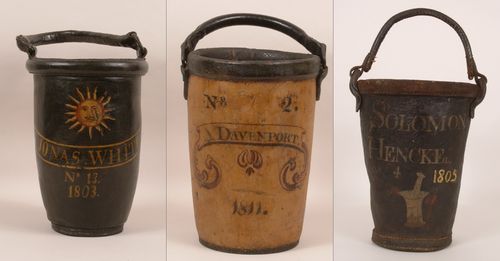 These painted leather buckets all date from the early 19th century. Though the owners of the first two are still unidentified, we do know that Solomon Henkel was doctor and druggist in New Market, Virginia, around the turn of the 19th century. A prominent figure in the early history of the town, he served as its first mayor and postmaster.

When it came to fighting fire in the home, the leather bucket would eventually be replaced with the household fire extinguisher. While there are dozens of examples of fire extinguishers throughout the collections, one of the most unusual is the glass fire “grenade.” These consisted of a decorative glass bulb filled with a liquid and sealed with a stopper. When thrown at a fire, it shattered on impact and (hopefully!) snuffed out the blaze with the spray. Fire grenades could be placed conveniently in the home or workplace, even in public venues. Invented in the 1860s, these extinguishers were originally filled with a simple salt water solution, in order to prevent freezing. Later, they contained carbon tetrachloride, a solvent that was an effective extinguishing agent but was found to have dangerous side effects, damaging the nervous system and liver. As a result, fire grenades fell out of use in the early 20th century, but are still collectible as glassware and readily sold as antiques (naturally, any filled examples should be treated with extreme caution until the contents can be determined). 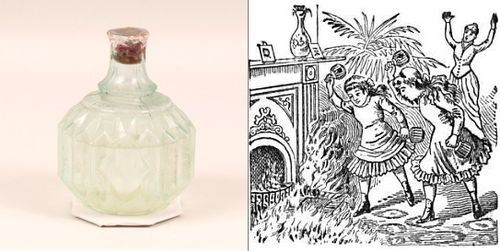 On the left, a late 19th century example of a glass fire grenade made by the Hayward Hand Grenade Fire Extinguisher Company of New York. On the right, a drawing of the Hayward fire grenade in action, from an 1887 magazine advertisement. The image encourages the idea that the product was so safe and effective, a child could use it.

In the 1887 advertisement that features the illustration above, the company solemnly addresses the home owner directly in the first sentence: “Reader, have you ever thought what you would do in case you should wake up at night and found the house on fire?” Today, the answer is probably not to lob a glass ball full of chemicals into the flames. But, in effect, it is the very same question that is at the core of every Fire Prevention Week. Do you have an evacuation plan with two exits? What objects do you have in your house to help in case of a fire? Have you checked your smoke alarms? Where are your household extinguishers located? Is your building equipped with fire escapes? In a museum, these things can be interesting to look at and read about. In your home, they can save your life. 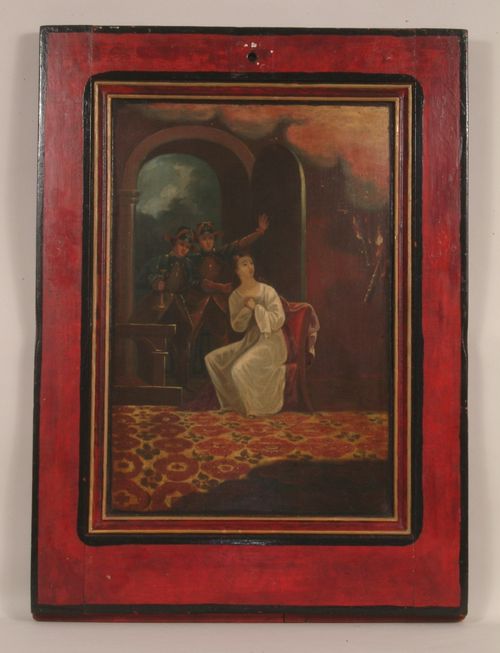 This painted wooden panel (c.1820-40) comes from a hand-pumped fire engine used by the Globe Fire Company of Philadelphia.

Tim Winkle is an associate curator with the Division of Home and Community Life at the National Museum of American History. His is responsible for the museum's Firefighting and Law Enforcement Collection.