Editor’s note: This post is the first in a series about the history of biotechnology and genetics related to objects that have recently been photographed and made available for viewing online. Explore recently digitized objects in the Smithsonian-wide Collections Search Center. 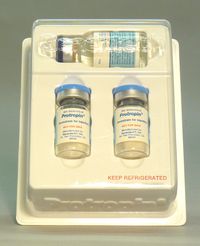 What do doped up athletes, genetically modified bacteria, brain-eating diseases, and short kids have in common? They're all a part of the history of human growth hormone in the United States.

Without getting too high school biology on you, here's a brief summary of human growth hormone (HGH). HGH is secreted by your pituitary gland, a pea sized organ located near your brain. It helps with a variety of functions but its main purpose is to increase your height during childhood.

Scientists have known about growth hormones since the 1920s but only began using HGH to treat kids who were unusually short because of pituitary disorders in 1963. Use of the drug was fairly conservative, however, because it was in short supply, due to the fact that there was only one source of HGH—humans. Gathering the drug meant isolating it from the pituitary glands of cadavers, a rather grizzly process which is illustrated in all its gory detail (using animal glands) in the October 11, 1948 issue of Life magazine. (As a bonus, the article also includes pictures of Dachshund puppies and giant rats.)

Production of the drug in this way continued for more than 20 years. That all came to a halt, however, with the horrifying discovery that some of the drug was contaminated, having been extracted from a cadaver infected with Creutzfeldt-Jakob disease (CJD). CJD is similar in effects to mad cow disease or accelerated Alzheimer's, causing rapid brain degeneration leading to death within a year of the first symptoms. There is no treatment and no test for CJD, which can lie dormant for decades after exposure before signs of infection appear.

Eventually, 26 people would die of CJD from contaminated HGH. The fact that there was no way to test for infection turned the lives of all of those who had been treated in the 1960s and 1970s into a terrifying waiting game. Patients lived in constant fear of the onset of symptoms. This uncertainty resulted in another strange story when a man who had received HGH as a child plead innocent to charges of murdering his mother, Susan Cabot, B-movie star of films like The Wasp Woman, claiming he was suffering madness due to the effects of CJD.

Following the discovery of the contamination in 1985, the U.S. Food and Drug Administration halted all distribution of cadaver-derived HGH. As luck would have it, however, a new source for HGH was in the hopper. Biotechnology company Genentech and drug company Eli Lilly had both independently been working on a new way to manufacture HGH using recombinant bacteria. The companies genetically modified bacteria by inserting a gene coding for the production of HGH. This genetic transformation turned the bacteria into little factories to pump out HGH, leading to a limitless source of pure HGH with little risk of contamination. 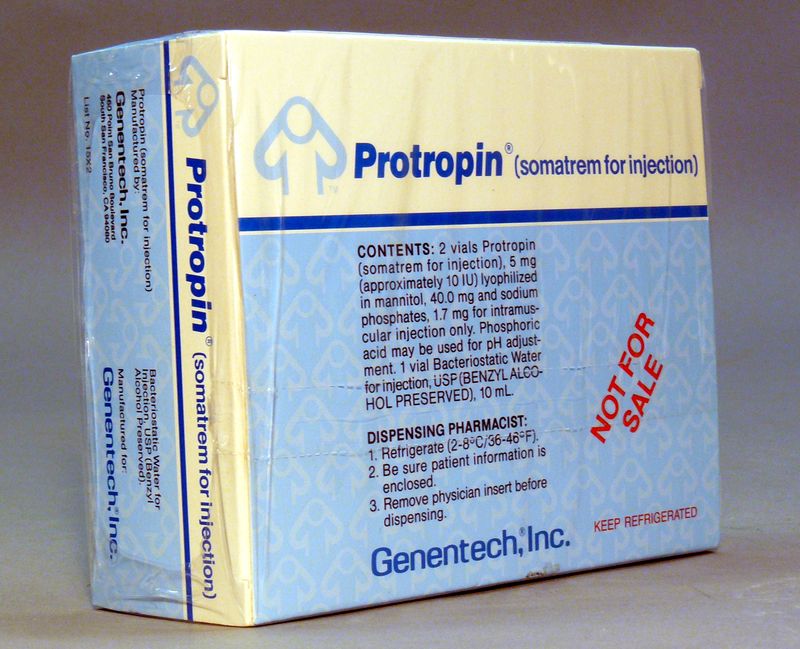 Early sample of Protropin, used to treat children with growth problems stemming from an inability to produce their own growth hormone.

Six months after the ban on the natural source of HGH, the FDA approved Genentech's recombinant HGH, a drug called Protropin, making it only the second recombinant pharmaceutical to be sold in the U.S. In our collections we have several examples of Protropin some of which have just been digitized in our online collection. Look closely and you’ll notice the Protropin graphic—a clever symbol that blends a human form and an "up" arrow.

Protropin, and other brands of recombinant HGH not only provided a safe source of HGH for kids with growth disorders, but the increase in supply of HGH meant experimentation with other applications for the hormone. One was the explosion of blackmarket HGH use by athletes to improve their performance. In 1986, The Washington Post reported some doctors predicting that use of HGH in athletes "could lead to the day that, instead of cheering for 'The Fridge' [nickname of 6'2" 380-pound, fan favorite William Perry, a player for the Chicago Bears in the mid-1980s], fans would be yelling for three-bedroom colonials." Though house-sized athletes never materialized, HGH continued to be a favorite drug for doping, particularly because it was difficult to detect in tests. Recent improvements in testing, however, may soon change HGH's place in sports. April of 2012 marked the first time that a U.S. athlete (weightlifter Pat Mendes) was banned from the Olympic Games for a positive test for HGH.

Interested in learning more about the development of recombinant pharmaceuticals and other history topics? Browse the whole group of Biotechnology and Genetics objects and the rest of the Smithsonian's online collections.

Mallory Warner is a Project Assistant in the Division of Medicine & Science.