Part I: My experience on set of the movie "Gettysburg"

Editor's note: As part of our Classic Film Festival featuring Civil War movies, you can see Gettysburg (1993) at the museum on Saturday, October 20, 2012. Inspired by the film festival, we’re taking you behind the scenes of Gettysburg with guest blogger Brian James Egen. He is the program development officer at The Henry Ford. 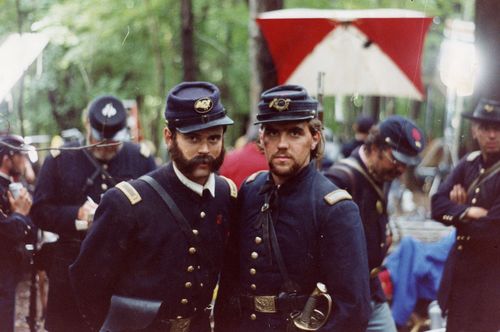 "Tom Chamberlain" (C. Thomas Howell) left and the "Cocky Lieutenant" (Brian James Egen, author of this blog post) right during a break in the filming on the Little Round Top set during filming.

The movie Gettysburg, based on the 1975 Pulitzer Prize winning classic novel The Killer Angels by Michael Shaara, was an on-again, off-again film project, almost since the day it was published. In 1992, after ten years of lobbying studios and distributors, writer/director Ron Maxwell was able to collaborate with Ted Turner and Turner Pictures to finance the film. On July 20, 1992, principal photography commenced in and around Gettysburg, Pennsylvania. Although some of the film's scenes were shot on the actual battlefield (a truly unprecedented National Park Service allowance), the vast majority of combat and opposing fire sequences were filmed on set locations three miles west of town. I spent six weeks on the film and, although was I was originally hired as a background extra, my participation culminated in being cast in a speaking role as the "Cocky Lieutenant." 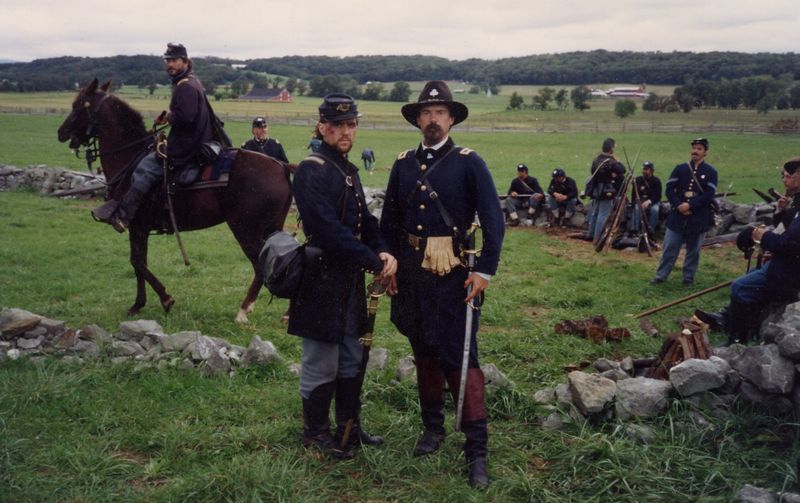 Having graduated college in the spring of that year and recently been hired as a part-time historical presenter at The Henry Ford (Henry Ford Museum and Greenfield Village), I applied for a leave of absences to participate in this long-awaited film project. Arriving in mid-August, I participated in what as known as "Pickett's Charge Week" that was highlighted by filming the advance of Pickett's Division from Spangler's Woods along Seminary Ridge to Emmitsburg Road across the same ground as the original participants. 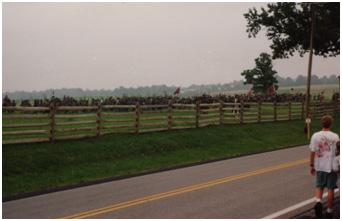 The initial advance of the Pickett's Charge scenes was filmed at the original location on the battlefield. Here, a portion of the 3,000 extras march at the double-quick up to the fence bordering the Emmitsburg Road. For the tourists and those passing by, it was a moment they will probably never forget.

I have never had a more intimate experience with history as I did the day we filmed that scene on the actual battlefield. The step-off point for Pickett's division started in the hollow west of Alexander's Knoll wherein Cemetery Ridge (the Federal position) could not initially be seen by the Confederate soldiers. As I, along with nearly 3,000 extras, marched toward the Federal position and out of the hollow, we could at first see the tops of the taller monuments, then the top of the infamous Copse of Trees, then the Federal regimental monuments, the fences, and finally the stone wall where the Federal Second Corps was positioned. Sans the monuments and markers and with thousands of armed men waiting for them, this is what the original soldiers would have viewed as they approached—for many this was their last view. As we proceeded toward the Emmitsburg Road (our stopping point for filming), I was brought to tears—overwhelmed by the inculcation of the moment, location, and facile understanding of the historical event we were replicating. The remainder of the Pickett's Charge scenes were filmed on the set location. 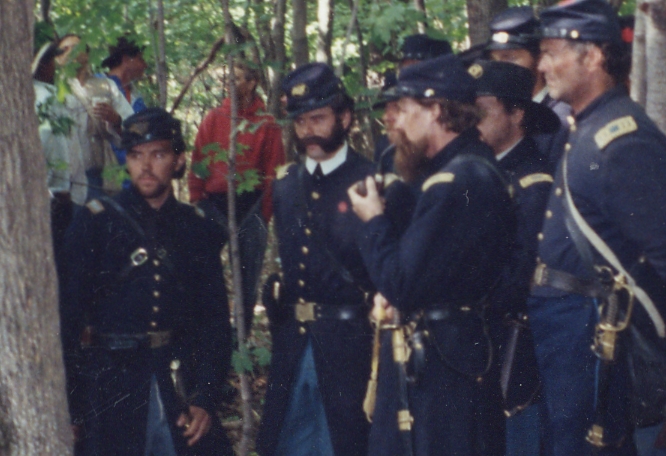 "Cocky Lieutenant" (Brian James Egen) left, "Tom Chamberlain" (C. Thomas Howell) center, and Captain Ellis Spear (Donal Logue) rehearse scene 68. This is the first scene in which the "Cocky Lieutenant" speaks, "Colonel, it seems to me all the fighting is on the other side of the hill."

In the last part of August, I participated in the filming of General John Buford (played by Sam Elliot) cavalry scenes as part of the Federal First Corps infantry. On September 2, production shifted to film Colonel Joshua Chamberlain (played by Jeff Daniels) and the 20th Maine Infantry—nearly half of the movie's storyline. A general call went out to the 250 remaining core group of extras that six men were needed to help flesh-out the "officer’s corps" of the 20th Maine. Borrowing some of the necessary officer accouterments, I applied for and obtained selection as one of the six.

On September 14, believing my excitement and participation could not be rivaled, Assistant Director Skip Cosper approached another young officer and I, asking if we, "would care to audition for Ron [Maxwell] for the role of the 'Cocky Lieutenant'?" Of course, the answer was yes, and my counterpart and I were given three script scenes to memorize that feature the "Cocky Lieutenant." Two days later we auditioned for director Ron Maxwell, saying the lines to a tree. Subsequently, I was chosen for the role and finished the rest of the filming in my part. Although I was involved in nearly every 20th Maine Infantry scene in the movie, there were three scenes that I had speaking lines all of which were with Jeff Daniels portraying Colonel Joshua Chamberlain. 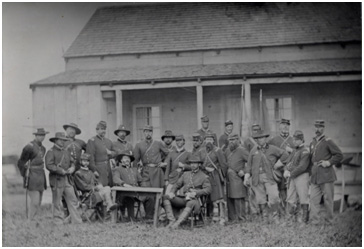 Copy of a collodion wet plate process photograph taken of the majority of the Federal cast in front of the Leister House (General Meade's headquarters) set building. "Tom Chamberlain" (C. Thomas Howell), "General Winfield S. Hancock" (Brian Mallon), "Colonel Joshua Chamberlain" (Jeff Daniels), and "Lieutenant Pitzer" (Bill Campbell) are around the table. Ken Burns, who had a cameo appearance as General Hancock's Aid, stands to the right of the table with his hand in his blouse. Brian James Egen stands to the right of Ken Burns. This image was used in the opening title sequence of the film.

Filming wrapped on September 30th, with the final scene filmed being the last scene in the movie wherein brothers Joshua and Tom Chamberlain embrace—and yes, that was the real sunset in that scene.

The entire experience was exceptional and informative in many ways and helped fuel my interest in history and film making. I met many people on set that have become life-long colleagues and friends in the field of history. My brother and uncle were able to participate in some of the filming which added to the memorable experience of making of this monumental film. 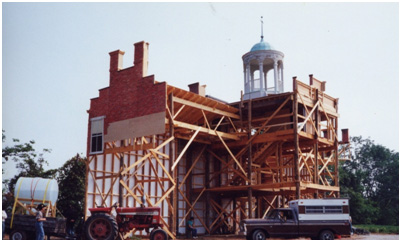 The back view of the Lutheran Theological Seminary set building used as a backdrop for the first day battle scenes where Federal General Buford’s Cavalry and General Reynolds's Infantry held back the Confederate attack depriving them of the high ground. This scaled version of the Seminary building was built on a farm about 17 miles west of Gettysburg where the large battle scenes could be staged. 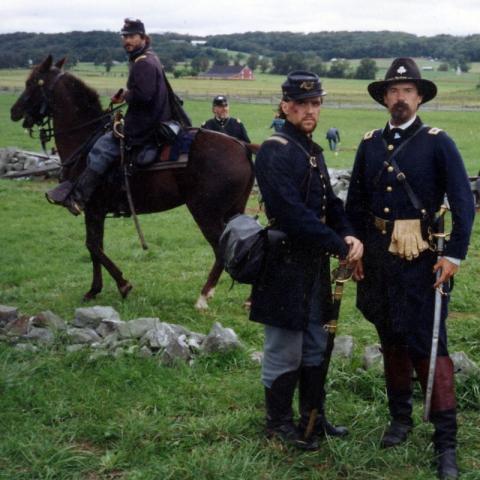 Part II: My Experience on the set of "Gettysburg"
Editor’s note: As part of our free Classic Film Festival featuring four Civil War movies, you can see Gettysburg (1993) at...