The bagatelle wizard instead of the pinball wizard

Located on the bottom shelf of a storage cabinet in the sports collection is a small open wooden box lined in green felt, with holes and pins attached to the bottom and a pull knob at one end. What does this have to do with sports? 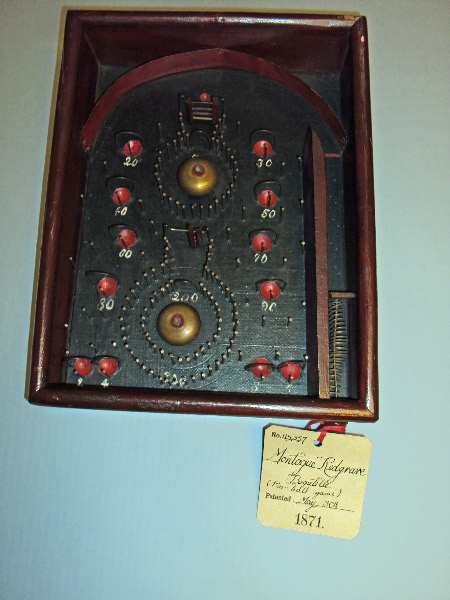 To my surprise, the game of bagatelle is the 19th century version of what we know as pinball! It bears little resemblance to the game played by the Pinball Wizard in the Who’s infamous rock opera Tommy or the coin-operated archade game with blinking lights familiar to most readers.

Played on a slightly inclined wooden table with randomly placed holes at one end, the game of bagatelle involved rolling or shooting ivory balls with a cue stick into a scoring pocket or hole. Pins affixed to the table were added and used to ricochet the balls into the holes. The primary objective was to score as many points as possible.

The game's origins are fuzzy, but most historians credit the French for this popular pastime. In 1777, Count Artois, a brother of King Louis XVI of France, hosted a party at his home, the Chateau Bagatelle (hence the name), where he erected a building especially to house his gaming tables. Bagatelle became all the rage with the French aristocracy and was quickly adopted by the French military, which played the game in the Army barracks to pass the time.

In all probability, the French soldiers introduced the game to the Americans during the Revolutionary War. Variations of the game evolved in both England and America, and by 1819 the word bagatelle was defined in the dictionary as "a popular game played on a table 7' long and 21" wide, in which 9 balls were shot into various holes surrounded by wooden pegs, affixed to the table." 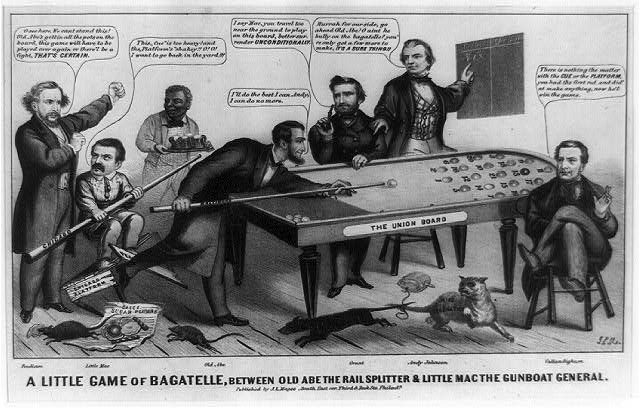 Its popularity caught on quickly. In 1836, Charles Dickens references the game of bagatelle in his Pickwick Papers, and a political cartoon from 1863, "Abe Lincoln playing bagatelle with his Generals," portrays Lincoln stretched over a long wooden table, using a type of cue stick to shoot the balls into randomly placed holes. This version appears to have no pins. It looks like a modified pool game.

But what does this have to do with pinball?

In 1871, Montague Redgrave, an English immigrant who settled in Cincinnati, Ohio, applied for a patent for "The Improved Game of Bagatelle." Redgrave's patent introduced the modern form of the game, including a spring-loaded plunger that one pulled to shoot the ball, bell domes that created a ringing sound when the player hit the hole and colorful glass balls imported from Germany.

Redgrave began making the games in his home in Cincinnati, Ohio, and sold them through various business establishments offering "Bagatelle, Toys, Novelties, Billiard tables, and Parlor games ranging from one dollar to a hundred dollars."

The game was an instant hit with children and adults alike. A table-top version of the game was awarded as a premium for purchasing Necco Wafers, and Milton Bradley created their own version to sell specifically for home entertainment. The popularity of the game grew by leaps and bounds, and in 1879 Redgrave moved his business to the East Coast where an abundance of supplies and labor kept up with the growing demands. 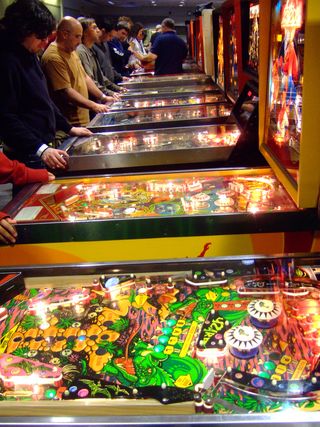 The bulk of the profits came from a new, larger version of the original table top game that was promoted to saloon owners as a way to "entertain your customers and make money." The Parisian Bagatelle Table "combines gravity with muscular power." Marketed by Rothschild's & Sons, the game was advertised as "two actions worked in harmony on an inclining table which has great advantage over the cue." For just a nickel you could buy a handful of balls and try your luck for 20-30 minutes. With this glowing endorsement, bagatelle tables became a common fixture in taverns, inns, saloons, and penny arcades.

In 1892, Charles Young of York, Pennsylvania, applied for a patent for "The Coin Game Board" which displayed all the basics of the multi-pinball machine, including a glass cover, a pin studded playfield, and a self-operated coin machine with an automatic set up. Most pinball aficionados cite the addition of the coin machine (the player puts the money directly into the machine) as one of the major modifications that helped usher in the game of pinball.

These new advances in technology, including the invention of the five cent coin machine and the automatic coin change out, introduced new skill sets to the game. But this would prove to be a double-edged sword. While the game attracted many new players, its reputation as a gambling device linked it to crime and undesirables.

By 1900 the popularity of the large commercial size tables had waned, but the table top versions continued to be a popular form of home entertainment. With the onset of the Great Depression in 1930, people were looking for any form of escape, and the game of bagatelle began to evolve into the game we know today as pinball.

Melodie Sweeney is an associate curator in the Departments of Art & Culture.

If you enjoyed this blog post, you might also enjoy discovering the origins of the home video game or the best place to play croquet.