5 questions with a colonial culinarian

It's not everyday that you get to meet an expert on colonial foodways—especially not one dressed in a historically accurate pilgrim outfit.

But that's exactly what happened to me at the museum recently. Colonial Foodways Culinarian Kathleen Wall spoke with museum visitors about colonial life and food, so I took the opportunity to ask her five questions about how pilgrims celebrated the harvest. Since 1980, Wall has been on staff at Plimoth Planatation, a Smithsonian Affiliate. She blogs about pudding and stewed pompions at Pilgrim Seasonings. 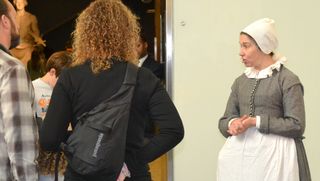 1. What are the top food myths about what was on the table for the "first" Thanksgiving?

Myth 1: Cranberry sauce. There might have been cranberries (but a berry by other name is still pretty not-so-sweet). They have lots of other names in English: Fen-berries, Fen-grapes; Marish-Berries, Marish-worts, Marish –whortleberries; Mosse-berries, Moore-berries, and kranebeere in Dutch... you get the picture.

Myth 2: Turkey was the centerpiece. Turkey was good, turkeys in Plymouth area were plentiful, big, 'fat and sweet,' but they weren't the only bird on the table. Ducks, geese, quails, pigeons (passenger pigeons, now extinct) and even swan could have been there, as well as venison. 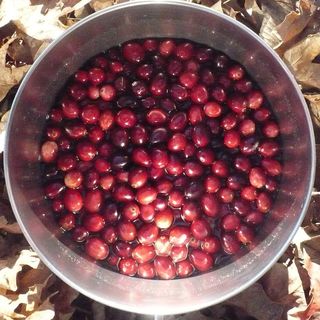 2. What did they really eat at the harvest celebration in 1621 (the phrase folks at Plimoth Plantation prefer to "Thanksgiving")?

Corn (for flour for bread and grits for porridge) and venison; wild fowl (usually considered waterfowl) and turkeys. No potatoes, sweet or otherwise. No green bean casserole. No pie—neither apple nor pumpkin.

3. How do we know what was on the menu then?

William Bradford, Of Plimoth Plantation, Morison ed. p.90.: "And besides waterfowl there was great store of wild turkeys, of which they took many, besides venison, etc. Besides they had about a peck a meal a week to a person, or now since harvest, Indian corn to that proportion, which made many afterwards write so largely of their plenty here to their friends in England, which were not feigned but true reports." [You can read the full historical text.]

Mourt’s, Applewood, p. 82.: "At which time, amongst other recreations, we exercised our arms, many of the Indians coming amongst us, and among the rest their greatest king Massasoit, with some ninety men, whom for three days we entertained and feasted, and they went out and killed five deer, which they brought to the plantation and bestowed on our governor, and upon the captain and others." 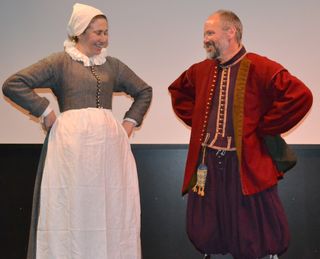 Wall and Richard Pickering, deputy director of Plimoth Plantation, dressed as Mayflower pilgrims, get ready to answer visitors' questions at the museum.

5. If I want to serve a pilgrim-inspired dish this Thanksgiving, what do you recommend?

Pottage is a great dish for day TWO of Thanksgiving!

The pottage recipe for Stewed Turkey with Herbs and Onions below is reproduced by permission.

Stewed Turkey with Herbs and Onions

Rinse the turkey pieces and place them in a pot large enough to accommodate them. Cover with cold water and add the salt. Cover the pot and bring the contents to a boil over medium-high heat. Reduce the temperature to keep the broth at a low simmer for 1 hour. Periodically, skim any froth that rises to the surface.

Remove the turkey pieces and set aside to cool. Raise the heat until the broth comes to a boil. Continue boiling, uncovered, until the liquid is reduced by half. This will take about 1 hour. 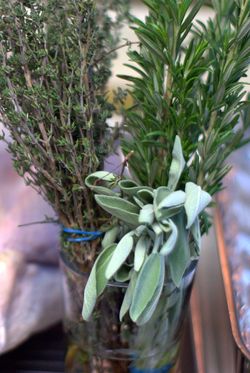 Add the onions, herbs, vinegar, butter, sugar, peppercorns, and cloves. Simmer for another 20 minutes, or until the onions are soft. While the broth is simmering, cut the cooled turkey into serving pieces.