On October 24, Stanley, winner of a historic robot race, left its home at the National Museum of American History aboard a flatbed truck and arrived safely at its destination, just seven blocks away. For the foreseeable future, Stanley will be here at the National Air and Space Museum, a centerpiece in the exhibition "Time and Navigation: The Untold Story of Getting From Here to There." 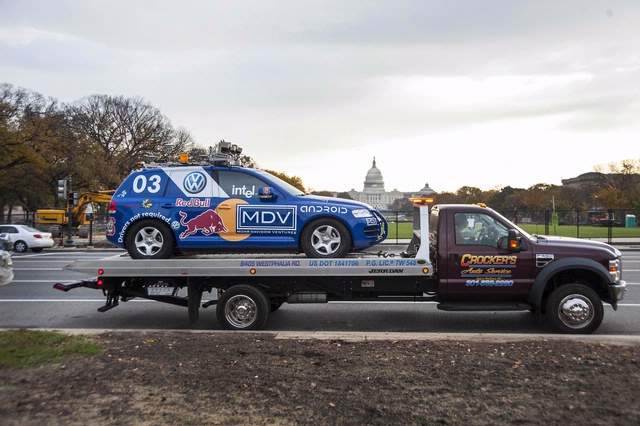 Stanley hitches a ride to the National Air and Space Museum. Photo by Richard Strauss.

The irony of the situation escaped no one. Stanley, a driver-less vehicle that had navigated 132 miles on its own to win the 2005 Defense Advanced Research Projects Grand Challenge, needed the help of scores of people AND a truck ride to get from there to here.

Frankly, moving Stanley is nerve-racking for me. I collected Stanley for the National Museum of American History's robot collection. I feel responsible for Stanley's safety and the safety of everyone involved with wrangling such a big, heavy car. On moving day, it turned out, there really was no cause for worry. Everybody—the National Museum of American History's experienced vehicle mover Shari Stout, the skilled riggers from the artifact handling company, and the welcoming National Air and Space Museum staffers—knew exactly what to do to put Stanley in just the right spot for long-term display.

Now that Stanley is securely in place, though, there's a moment to reflect. It's worth thinking more deeply about the car's place in "Time and Navigation" and the reasons for collecting contemporary objects for the Smithsonian in the first place. 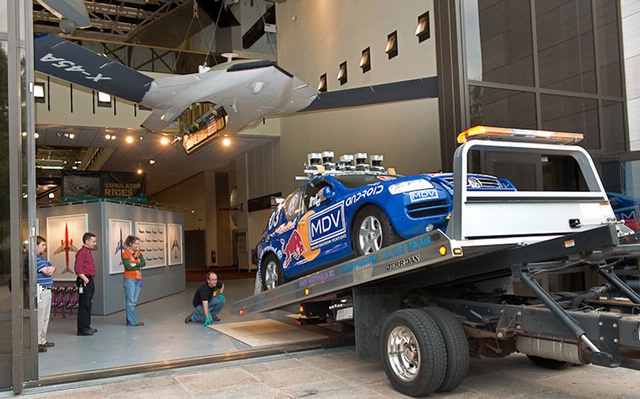 Stanley moves into the National Air and Space Museum. Photo by Mark Avino.

Some have already wondered: what's a car doing in the National Air and Space Museum? In "Time and Navigation," we link Stanley directly to satellite navigation, a subject clearly within the museum's scope. The car's ability to drive itself is a new application for satellite navigation, made possible when computers combine GPS coordinates with other kinds of data to construct an image of the road ahead, complete with obstacles. And there's another connection: Stanley operates on the ground in much the same way that UAVs, that's Unmanned Aerial Vehicles, operate in the air. Stanley moved into the museum right under the UAV exhibition on the west end.

When Stanley won the off-road DARPA race in 2005, the achievement was a giant technical step forward for autonomous vehicles, the vehicles like Stanley that drive themselves. Now, seven short years later, numerous car makers and Google are testing self-driving cars. Three states—Nevada, Florida, and California—have passed legislation permitting them on state roads. Advocates foresee a future where such cars will relieve congestion on highways, reduce traffic accidents, and provide transportation for those who otherwise cannot or do not want to drive. No point going to the showroom to shop for your robot car just yet, but insiders predict the technology will be commercially available soon. 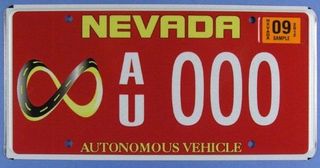 Predicting the future, like moving Stanley, makes me nervous. My training and interests make me passionate about the past. I'm a historian and a curator, not a soothsayer. Making decisions about what to collect from the long-ago past, a curator stands on pretty solid ground. Often there's a body of existing research and documentation that verifies the importance of an object from long ago. That's collecting from inside a comfort zone.

But collecting contemporary objects like Stanley comes close to predicting the future. It's a risky business. Curators have to make educated guesses that today's technical innovation will be tomorrow's historic milestone. Curators who do contemporary collecting take the risk that an object making headlines today will remain representative of some important event or illustrative of how Americans absorbs new technologies. Such an object might even carry material evidence that inspires our successors to dig deeper into research we haven't even imagined yet. Or maybe collecting such an object won't have any of those useful outcomes. Maybe it will simply lie fallow forever after in storage. As I say, it's a risky business.

An important indicator of an object's historical worth is whether it yields rich insights. So far Stanley does not disappoint. On display at the National Museum of American History, Stanley represented the latest in a long line of wheeled robots, a history that can be traced back to Renaissance automatons. At the Air and Space Museum, Stanley's technologies let us see inside the "black box" of navigation and consider emerging technologies that are likely to change the ways we get from here to there. Whether there will be more insights down the road, we'll just have to wait and see.

Carlene Stephens is a curator at the National Museum of American History in Washington, DC. She is currently working with a team of curators, designers and restoration specialists at the National Air and Space Museum to develop the Time and Navigation exhibition. 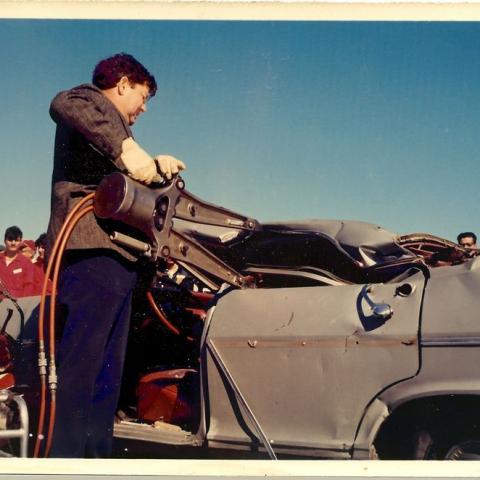