Historical fiction transports us to the past—but also raises questions about the present. Museum educator Jenny Wei explored this topic with Sara L. Schwebel, author of Child-Sized History: Fictions of the Past in U.S. Classrooms.

As a life-long lover of historical fiction, I had a "forehead-slap" moment as I picked up Professor Sara Schwebel's book, which explores how children's historical fiction engages in historical interpretations. Of course the background of the historical novelist would impact the story he or she wrote. The author's perspective is shaped by the era in which he lived. Moreover, the author only has access to the historical research completed before the time her book is published. This shades the way characters and plot are imagined, even if the author’s research was thorough and the author's aim was to present "historical truth." Every work of historical fiction is what Professor Schwebel calls "doubly historical:" it reflects both the time it was written and the time in which it is set. 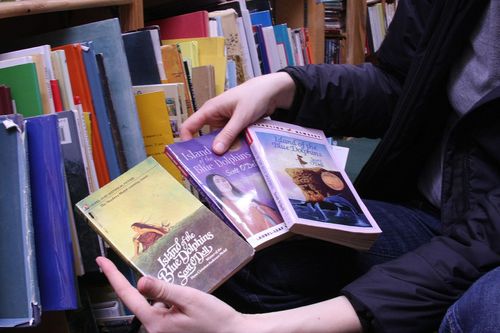 Three copies of "Island of the Blue Dolphins." Photography by Flickr user Arboreality (Megan), used via the creative commons license.

For example, the widely-taught Island of the Blue Dolphins by Scott O'Dell, tells the story of an American Indian woman living alone on an island after the rest of her people relocate to the mainland, a story inspired by real events in the mid-nineteenth century. The moving narrative tells of the woman’s daily life, thoughts, and feelings. In chapter 25, for example, she explains how she kept track of time: "Until that summer, I had kept count of all the moons since the time my brother and I were alone on the island. For each one that came and went I cut a mark in a pole beside the door of my house. There were many marks, from the roof to the floor."

Reading the novel, it is easy to forget that O'Dell had no way to know what the woman truly experienced. When the "Lone Woman," as the islander came to be called, eventually came into contact with people on the mainland, no one understood her language. O'Dell, writing in 1960, had second-hand sources: for example, nineteenth-century accounts in which people reported their "interpretations" of the Lone Woman's hand gestures and the writings of ethnographers who studied the indigenous languages of California after the Lone Woman's death. Today, new archeological information is emerging about what life may have been like on the island, but O'Dell's story is frozen in the limited understanding and information available in 1960.

Professor Schwebel's book focuses on children's historical fiction, but the questions she poses apply to historical fiction for all ages. Think about your favorite historical novel: When was it written? Were attitudes toward social issues different in that era from attitudes today? Can you see a way the author's background (i.e., race, class, gender)is reflected in the way the story is told?

Child-Sized History explores these topics in great depth, but I had the pleasure of asking Professor Schwebel five questions:

Many schools are trying to figure out how to implement Common Core State Standards (CCSS). Does your approach relate to Common Core?
Historical fiction can be an ideal tool for helping students learn to read and think like historians, which is a central goal of the CCSS "Literacy in History/Social Studies." Standard 9, for example, asks students to compare how a single topic is presented in multiple sources. Students might read two historical novels about the French and Indian War—Elizabeth George Speare's Calico Captive (1957) and Joseph Bruchac's The Winter People (2002)—and think about how, and why, the historical arguments they make differ. Who is a "captive" and who a "captor" in each of the books? How did the sources the authors consulted in their research, as well as the time period in which they wrote, affect the stories they told? Importantly, Speare's narrative is rooted in an eighteenth-century captivity narrative, A Narrative of the Captivity of Mrs. Johnson, containing an account of her sufferings, during four years, with the Indians and French (1796)— available free online. Bruchac's research draws in part on oral histories of the Abenaki people.

What are some of your favorite questions to ask while doing research about a work of historical fiction?
Many historical novels start with an archival source: a diary, a colorful historical personality, a local story passed down through generations. When children's books originate in real historical events, authors often mention their source of information in interviews or author's notes. I like to start my research by finding these historical sources and reading them for myself.

Do you have any favorite sources of information for students or novice researchers to start learning about authors?
I find authors' own words—about their research process, about their favorite books, and about how they "trick" themselves to sit down and write—fascinating. Today, many authors maintain websites, but if you are interested in researching authors who wrote in the pre-Internet era, you have to dig a little deeper. The Horn Book Magazine is a great source of author interviews, and it has also published every Newbery and Caldecott Medal acceptance speech given. 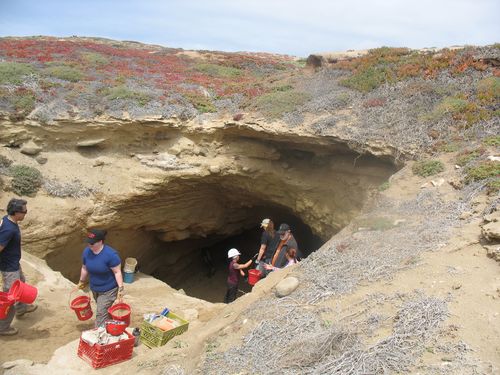 Dr. René Vellanoweth, his California State-Los Angeles graduate students, and U.S. Navy archeologists Steven Schwartz and Lisa Thomas-Barnett dig out what is most likely the Lone Woman's cave, described by Scott O'Dell in "Island of the Blue Dolphins." (April 2012)

I understand that the Island of the Blue Dolphins story also includes history that is currently being revealed. Can you tell us about that?
Archaeologists recently made some exciting discoveries on San Nicolas Island, home to the historical figure upon whom O'Dell's Karana is based. First, they uncovered a cave. Teams of archaeologists have been carefully removing layers upon layers of sand—the count so far: about 40,000 buckets or a million pounds. When they are done, they hope to find artifacts from both "Karana" and her ancestors, who undoubtedly used the cave before her. Second, archaeologists found two red-wood boxes filled with artifacts such as fish hooks, stone blades, and whittled bird bones. Although it's not known for certain, this, too, could be "Karana's." 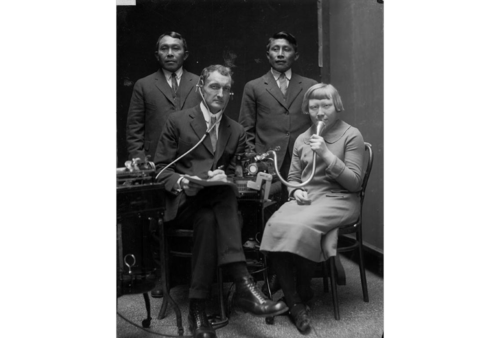 J.P. Harrington with three Tule Indians, making dictaphone records of language and songs of the Cuna, in the Smithsonian Institution, National Anthropological Archives

How did museum visits, staff, or resources impact your research?
Museums contain treasures essential to studying children’s literature. The Smithsonian, for example, holds the papers of the famous archaeologist J.P. Harrington (1884-1961), who studied the languages and cultures of many Native peoples in California. Among the music Harrington recorded on wax cylinders was a song supposedly sung by the historical figure upon whom Karana was based.

Earlier this year I visited the University of Minnesota Libraries' Kerlan Collection, which holds author Scott O'Dell's papers, including several drafts of Island of the Blue Dolphins. It was here that I learned that O'Dell considered Karana's Island and Island Girl as titles for his Newbery-winning book. I think he was wise to choose Island of the Blue Dolphins instead! As I examined manuscript drafts, I learned quite a bit about O’Dell writing process. For example, O’Dell carefully mapped out the plot of each of his chapters on thin, brown pages of paper that had been carefully cut in half. Lucky for me, he had pretty good handwriting!

From your experience as a teacher and training teachers, what are your tips for implementing these concepts in classrooms?

Take book reviews' praise of a novel as "historically accurate" with a grain of salt! Remember that all works of historical fiction are "doubly historical," and that to fully understand a historical novel, you need to consider how the past of the book's publication date (even if published in 2012) is interacting with the past of the novel's historical setting. Historical fiction can help children fall in love with history, and I encourage teachers to embrace the genre! Instead of using a historical novel to teach what happened in the past, however, teachers might use a historical novel to teach how we make sense of the past. History is interpretative: we create a useable past by telling a story. That story changes over time and it changes according to who narrates it. One way to make this challenging concept concrete is to juxtapose books that tell very different stories about the same event. I provide a number of examples of such novel pairings in my book Child-Sized History: Fictions of the Past in U.S. Classrooms (Vanderbilt UP, 2011). In fact, I wrote the epilogue with K-12 teachers especially in mind. In this section of the book, for example, I illustrate how to teach the American Revolution critically by asking students to compare three novels written during three different wars: Johnny Tremain (published during World War II), My Brother Sam is Dead (published in the wake of Vietnam), and The Astonishing Life of Octavian Nothing, Traitor to Nation, Vol. I: The Pox Party (published in the midst of the War on Terror).