Preparing for the National Youth Summit on Abolition

Editor's note: As the Museum prepares for the National Youth Summit on Abolition, we're exploring how teachers discuss slavery in their classrooms. Museum Programs Coordinator Susan Evans and Education Specialist Naomi Coquillon share what they've learned so far and why these issues are important to discuss with students. 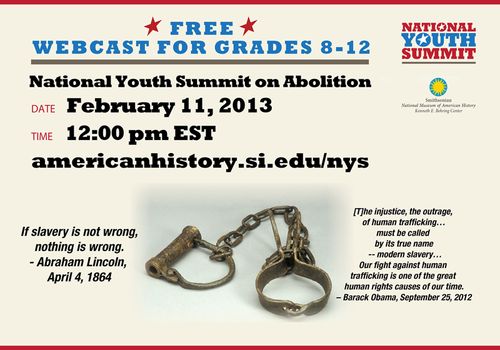 How do you use the lessons of the past to address issues today in your classroom? How can students better understand the challenge of ending slavery and the courage of 19th century abolitionists? These were the questions the museum's team considered when deciding how to commemorate the 150th anniversary of the Emancipation Proclamation this year for students. When discussing these questions with teachers, we found a common response, similar to this one from Maryland teacher Jodi Gratman:

"When I teach about slavery in both 7th grade World Cultures and 10th grade World History, I am often surprised by how little students know/understand about slavery as an institution. Our students' understanding of slavery is confined to African slavery and the Americas. Students are often surprised when I explain that slavery is an institution that has existed for millennia—wars were fought, and the losers, if not killed, were enslaved. They are more surprised when I tell them that [modern-day] slavery still exists..." 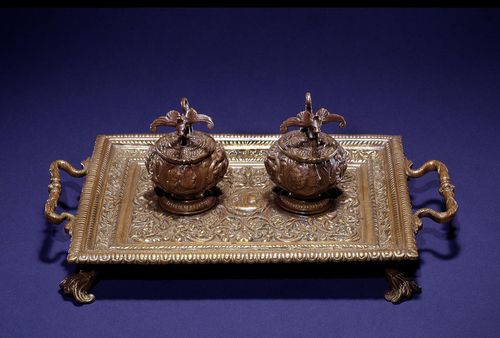 When President Lincoln signed the Emancipation Proclamation, there were close to 4 million enslaved people living in America. Today, an estimated 27 million people around the world are victims of human trafficking and modern-day slavery, defined as labor conducted through force, fraud, or coercion. In America, thousands of people today are victim to this modern crime with historic roots, serving in domestic and agricultural work and in the commercial sex trade among other areas.

Watch Historians on "The Abolitionists" on PBS. See more from American Experience.

On January 8, 15, and 22, the American Experience documentary series explores the motivations and tactics used by abolitionists William Lloyd Garrison, Frederick Douglass, Angelina Grimke, Harriet Beecher Stowe, and John Brown to help bring an end to legal slavery in the United States. (Enjoy historians' commentary on the documentary in the video above or here.)

On Monday, February 11 at Noon EST, the Museum will partner with WGBH/American Experience and Smithsonian Affiliations to examine the lessons the abolition movement of the 19th century holds for ending modern-day slavery with a free, live webcast for middle and high school students, our National Youth Summit on Abolition. The webcast will feature historians and activists in discussion with students and will include a conversation with Ken Morris, great-great-great grandson of Frederick Douglass and founder of the Frederick Douglass Family Foundation, an organization dedicated to "honor[ing] and preserv[ing] the legacy of Frederick Douglass and rais[ing] awareness about the enduring crises of modern-day slavery." 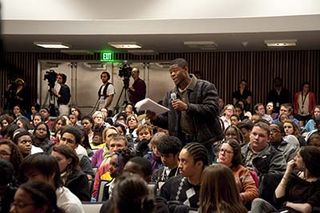 Human trafficking and modern-day slavery affect every community and cut across class, race, gender, and education levels. In September of 2012, President Barack Obama stated that, "the outrage, of human trafficking... must be called by its true name—modern slavery... Our fight against human trafficking is one of the great human rights causes of our time... [and] we can draw strength from the movements of the past."

To have your class join this important conversation on February 11, register today at https://americanhistory.si.edu/nys/abolition.

Susan Evans is museum programs coordinator and Naomi Coquillon is an education specialist at the National Museum of American History.