Media predictions foretell that this year's presidential inauguration festivities will draw smaller crowds compared to four years ago, when it was nearly impossible to find a hotel room, let alone a blow-up mattress, on a friend's floor. While this year's inaugural festivities may be different from those of 2009 in crowd levels, tone, and hopefully temperature, they share much in common with inaugurations past. 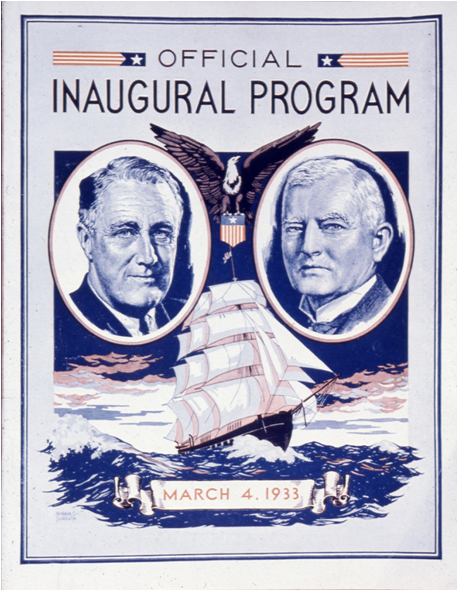 An inaugural program from President Franklin D. Roosevelt's 1933 inauguration. The celebrations were toned down at the last minute out of respect for the passing of Senator Thomas J. Walsh, Roosevelt's pick for attorney general. A buffet luncheon at the White House was cancelled as a result.

Curator Harry Rubenstein recently reflected on past presidential inaugurations as part of an online conference for students and teachers organized by the Smithsonian Center for Education and Museum Studies. You can watch all the conference sessions online, including those by Associate Curator for the Photographic History Collection Shannon Perich and Education Technologist Carrie Kotcho, but here are a few highlights of Rubenstein's talk. (Teachers will find the "virtual teachers' lounge" particularly helpful.) 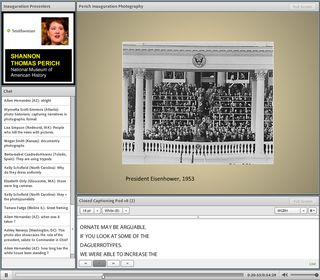 An important theme of Rubenstein's talk was the sense of contradiction in inauguration celebrations:

"Every four years, amidst the pomp and ceremony, the lofty speeches, the critique of too much commercialism, we honor and celebrate the promise of our democratic traditions," Rubenstein said. Inaugurations are "full of different kinds of messages. They're partly drawn from traditions of coronations and have all the trappings and fittings that a monarch would be comfortable with and there's also this really down-to-earth aspect to them ... intended to promote national unity." 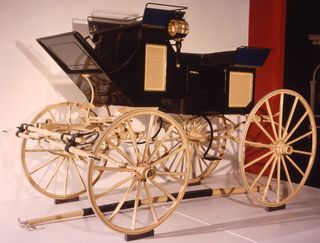 But there's a triumphant tone as well that may not be shared by or open to all:

How did inaugurations get to be this way? Rubenstein points to the story of President George Washington's inauguration:

"The first presidential inauguration really sets the tone for all of those that have followed. His inauguration was as grandiose an affair as the country could have mustered, and in many respects resembles a royal coronation. He was in Mount Vernon and he takes an eight-day journey from his home up to the temporary capital in New York City. Washington enjoyed a hero's reception and, along the way, there were well wishers who followed his path and when he stopped at various cities there were celebrations and banquets. A specially built barge met Washington on the New Jersey shore and he was rowed across the Hudson River to New York City.

"On the morning of April 30, 1789, Washington climbs into a yellow coach drawn by four white horses and was escorted by two military companies to Federal Hall... And on the balcony, he raises his right hand on an a red covered Bible [and] he recites the oath required by the Constitution. Washington then kisses the Bible. Bells across the city ring in celebration and that evening throughout the city of New York, there are celebrations and fireworks." 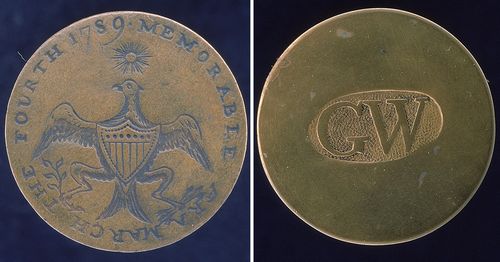 This year's inauguration might not include yellow coaches, white horses, or presidential barges, but the souvenirs you'll spot go back to Washington's inauguration:

"One of the things that emerges from this first inauguration is inaugural souvenirs [such as this] little brass button. There were several of these and they take different forms, but they were sold by souvenir peddlers to the well-wishers who could then take the brass buttons and attach them to their clothing to demonstrate their support."

"On the morning of March 4, 1801, Jefferson, accompanied by a few citizens, left his boarding house. He walks up a narrow footpath now known as Pennsylvania Avenue up to the Capitol, that was at that time only half-built. In a crowded senate chamber, Chief Justice John Marshall administers the oath. Jefferson delivers his inaugural address, speaking so softly that most people could not hear him. And then the new president walks back to his boarding house to host a small dinner party for friends and fellow boarders." 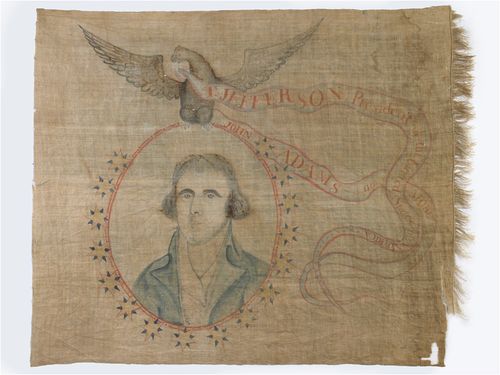 But there was still room in Jefferson's simple celebration for "partisan gloating." This is one of the oldest political banners in the Smithsonian's collection, made to celebrate Jefferson's inauguration. The text at the top says, "T. Jefferson, of the United States." Below that, "John Adams is no more." (Zoom in for a closer look at the banner.)

"It's, you know, a little bit of this partisan poking," Rubenstein said of the Jefferson banner. "And that's part of this process. It's an odd kind of mix that we have with inaugurations. It's clearly this effort about national unity. On the other hand, it's a time for the party that won the election to celebrate and announce that they are in fact the new power in Washington."

"But most of all, I think they reflect the hopes we have for the president, the nation, and our democratic process," said Rubenstein.

Erin Blasco is an education specialist in the New Media Department. During the 2009 inauguration, her household of three also accommodated two Wisconsinites, two Georgians, a Bostonian, and a Frenchman (who brought a can of pâté for his hosts that seemed incongruous during inaugural festivities). This year, she'll be watching the festivities from Austin, Texas, but looks forward to tweets, Flickr photos, and Facebook posts from visitors enjoying the celebration at the museum.