The "Pony" press and the patent model collection

Editor's note: When the U.S. Patent Office divested itself of patent models—a previous requirement of the patent application—some 10,000 models came to the Smithsonian and were later assigned to this museum's collections. Curator Joan Boudreau shares the story of one of many patent models recently made available for viewing in our collections database. Models in the Graphic Arts Collection include those representing the trades of printing, papermaking, and bookbinding. 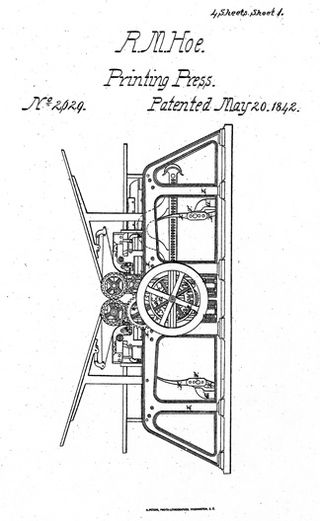 The communication patent models relating to the printing, printmaking, papermaking, and bookbinding trades are housed in the Graphic Arts Collection. Those models have been photographed and can now be seen and researched online.

Included in the Graphic Arts Collection are 12 models representing the inventions of Richard M. Hoe. Hoe (1812-1886) received patents for some thirty inventions, several along with colleague Stephen D. Tucker, and most having to do with printing machinery. 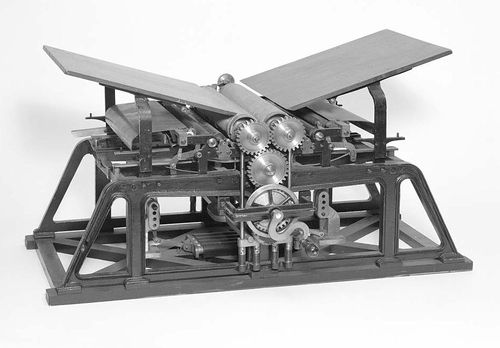 Richard inherited the R. Hoe & Company, New York business, in 1833 from his father Robert. The manufacture and sale of Richard's inventions brought the company to new heights. By mid-century it had become one of the most successful manufacturers of printing presses and printing equipment in America.

One of Hoe's inventions, nicknamed the "Pony" press (represented here with the collection model and the patent drawing) was patented because of its improvements to the double-cylinder press, "a novel and efficient arrangement of the levers and springs which are used to stop the momentum of the bed of the press at the end of its traversing motion in either direction; and ... an improvement in the manner of raising and lowering the pressing cylinders, so as to cause them to rise and fall with the most perfect steadiness, without the possibility of their being subjected to those jerks, to which they have been liable under a rapid motion of the press as heretofore constructed."

There is no direct evidence about why this particular press was given then name Pony as opposed to any other, but it related to the speed with which it completed print jobs. 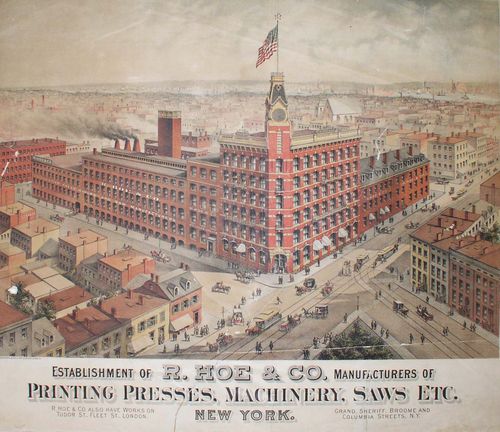 Hoe & Company promotional lithograph from about 1884

During the nineteenth century, steam power was used to augment the power of the printing press to enable larger runs of newspapers. Inventor-printer Benjamin H. Day took advantage of this and other printing technology innovations to produce his daily New York newspaper The Sun. Day's newspaper set the trend for other less expensive and popular "penny press" newspapers designed to amuse readers with human interest stories, instead of more traditional editorials and political reports. 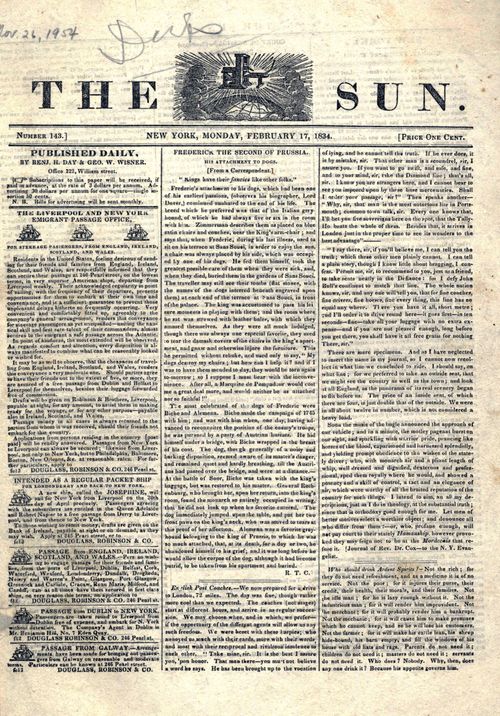 "The Sun," published between 1833 and 1950, began as a four-page daily newspaper with stories of local interest, crime reports, and sporting news.

Hoe's Pony press was said to have been built specifically for Benjamin Day and The Sun. Its claim of producing between 5,000 and 6,000 impressions an hour, allowed for a far greater run and the possibility for a much larger circulation, which by 1836 had reached 30,000.

Hoe's inventions and his manufacture of printing equipment assisted communication in a new nation with interests in entertainment and the rapid distribution of information. His inventions are testament to the ever-changing technologies of his time, and can be compared with inventions and interests today.