A pin, a bracelet, and 5 of our online resources on women's right to vote

Ever talk to a kid in your life about women's history? Educator Jenny Wei shares a few hand-picked resources for getting the conversation started.

With a specialty in working with young people, I love looking at museum objects that seem recognizable right away. In your mind, walking through a museum full of objects, you may look into a case and say to yourself, "Ok, that's a bracelet," and move on. It's tempting to say, "We have bracelets today. I know what bracelets are for." But when you pause to ask yourself why is THIS bracelet in a museum, you find a new way to look at a challenging story about American politics. 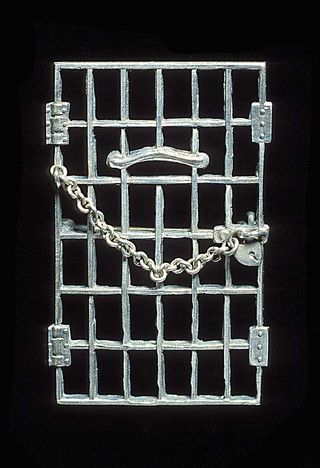 More than 150 women were sentenced to prison in 1917 as a result of their picketing the White House for the right to vote. The charge of obstructing the sidewalk led to sentences from two to six months at the Occoquan Workhouse in Lorton, Virginia. The women demanded to be treated as political prisoners, objecting to poor conditions. With a few of their members placed in solitary confinement, some of the women embarked upon a hunger strike, which resulted in them being force fed by prison officials.

The National Women’s Party recognized the efforts and heroism of the prisoners. In December, 1917, at a meeting in their honor, the picketers who had been jailed were presented with small silver pins in the shape of prison doors with heart-shaped locks. The women wore their pins to commemorate their imprisonment and call attention to the injustice of being "jailed for freedom."

What do you think of the door symbol? Would you have picked a different symbol? 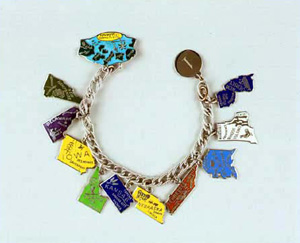 This bracelet, representing eleven of the thirty-five states that ratified the ERA, was worn by Alice Paul, who drafted the original amendment in 1923.

In 1972, Congress passed the Equal Rights Amendment (ERA), which would guarantee men and women equal rights under state and federal law, and sent it to the states for ratification. From 1972 to 1982, supporters campaigned to get the required 38 states to ratify the amendment. But the effort was opposed and ultimately defeated by those who feared the ERA's moral and legal impact on American society.

This bracelet, representing 11 of the 35 states that ratified the ERA, was worn by Alice Paul, who drafted the original amendment in 1923. What happened in the nearly 50 years in between Alice Paul's first amendment and state ratification? Almost every session of Congress introduced some variation of the ERA, but most variations stalled in committees until 1970 when Representative Martha Griffiths successfully petitioned to move the amendment to debate before the full Congress.

Take a close look at the states on this bracelet. Is your state there? Did it ratify the ERA or not? What do you think about that?

I also adore this pair of objects because of the contrast they present. On one hand, there is a promise fulfilled: for more than 90 years, women have had the vote. On the other hand, the Equal Rights Amendment was never passed, despite the work of so many petitioners. The bracelet is closely associated with one woman, who was a prominent leader of her movement, but many Jailed for Freedom pins were presented, which reminds me of how history was also made by people whose names we have forgotten.

I hope you will take a moment to explore these two objects with a young person in your life. Talk about the stories together. And if you are in the mood to learn more about the woman suffrage movement, take a look at a few of these online resources:

Jenny Wei is an education specialist at the National Museum of American History.