Part I: Great strides for the "New Woman," suffrage, and fashion

On the day before Woodrow Wilson's inauguration in 1913, 5,000 women marched up Pennsylvania Avenue in Washington, D.C., demanding the vote. The parade is the subject of an artifact wall display here. In addition to banners and programs, the women used their clothing to communicate their message, a topic we discussed with Alden O'Brien of the Daughters of the American Revolution Museum. See Part II of this post here. 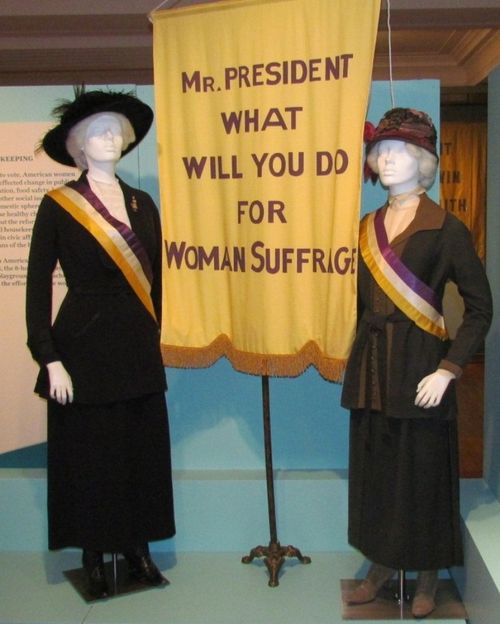 The exhibition you curated at the Daughters of the American Revolution Museum is titled "Fashioning the New Woman: 1890-1925." Who was the "New Woman"

The New Woman was a stereotype, or an archetype that burst on the popular culture scene just about exactly in 1890, the beginning of the time covered by the exhibit. Like the flapper or the hippie, the New Woman embodied a certain "type" of person that in some way uniquely represented her time.

What was "new" about her was that she was bolder, more active, more out-and-about in the world, more outspoken than her mother's generation. Of course, it should be said that the New Woman was mostly a middle-class phenomenon, and to some extent an urban one. But in embracing new activities and eventually (not without some resistance and criticism along the way) making them more acceptable, these New Women influenced American women's lives overall.

It's hard to say why she emerged at this time except that the time was ripe. The Victorian bourgeois ideal of the middle-class lady who stayed at home and kept quiet, was getting old, and a new generation was ready to seek other options. 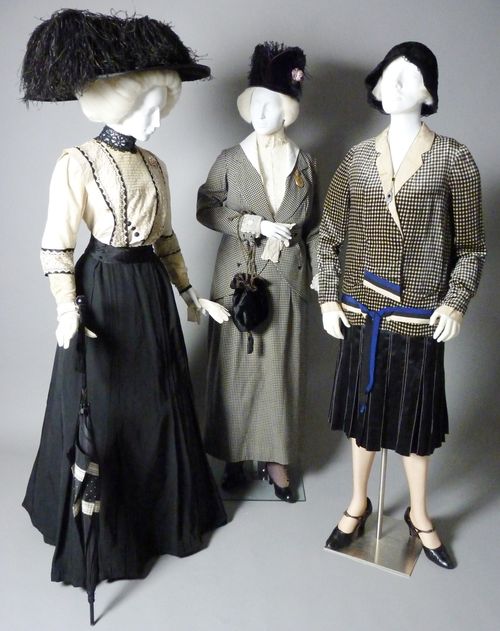 The display at this museum on the 1913 woman suffrage parade includes some costume elements worn in the parade. What was fashion like in 1913?

Styles of 1913 were well on their way away from Victorian and Edwardian layers and bulk. Corsets no longer constricted the waist, really, but instead they would give you a smooth line, like today's Spanx for example, and the silhouette was quite slender, needing just one slim petticoat instead of several.

The tailored suit was a staple of every woman's wardrobe, and the skirt-and-blouse look was one of the most popular. Dresses were looser-fitting, whereas they used to be very precisely fitted to the corseted figure. Women had already come a long way since the multi-layered, corseted, upholstered look of the late Victorian era. 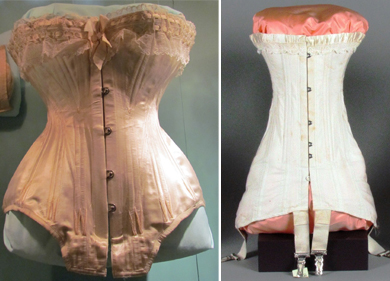 Left: a corset from 1900. Right, a corset from the 1910s, which is less rigidly constructed. Its long lines do more smoothing than cinching. Daughters of the American Revolution Museum.

In the 1913 suffrage parade, women used their clothes as well as many other tools (signs, printed material, etc) to get their messages across. What messages did the clothes of the 1910s send?

Well, we know that women were encouraged to wear white for some of these parades—probably more true of spring and summer ones than the March 1913 one, as photos of this parade show women bundled up in their coats and muffs. White was one of the colors of the suffrage movement along with purple and yellow (green and purple in England). The traditional association of white with young girls, weddings, youth, and "purity" must all have played into using this color—it may have been intended to suggest the purity and high-mindedness of their goals.

In general, fashion of this time was starting to reveal just a tiny bit more of women's bodies: daytime outfits could now show a bit of collarbone instead of having those high, snug collars of just a few years ago. Sleeves could be elbow-length instead of to the wrist; and you might catch a glimpse of ankle—very shortly after 1913, hemlines rise to a few inches above the ankle. (Although women still felt they should wear boots rather than reveal their actual ankles for a few more years!)

All these freer, looser styles allowed more freedom of movement, which suggested great strides were being made in women's ability to get around and be less constricted physically. 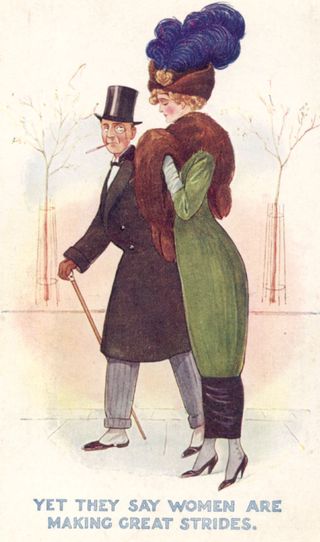 Even at the time, the irony of the hobble skirt's hampering women's movement was not lost. Postcard, about 1912,
Daughters of the American Revolution Museum.

That said, there was a strange fad for the "hobble skirt" around 1910-1912, which made skirts tight at the ankles, restricting women's steps. A comic postcard of the time mocks this style specifically referring to how it contradicts women's progress being made at the time: "And yet they say we are making great strides," it says—no strides were possible with those tight skirts! Fortunately, it was a brief fad, and one which many women ignored!

A silk day dress of about 1912-13 would drape gently over the body in contrast to earlier styles which were snugly fitted to the corseted body. Daughters of the American Revolution Museum.

Alden O'Brien is the Curator of Costume and Textiles at the Daughters of the American Revolution Museum in Washington, DC, and curated the Fashioning the New Woman exhibition on view there through August 31, 2013. To learn more about the 1913 suffrage parade, read our post on Alice Paul, this post on three suffrage artifacts from the Sewall-Belmont House and Museum, explore our woman suffrage collections, and visit the National Museum of American History's display about the parade. Stay tuned for Part II of this blog post.

Part II: Great strides for the "New Woman," suffrage, and fashion
The 1913 woman suffrage parade brought women from around the country to Washington, D.C., in a show of determination to obtain the ballot...