The 1913 woman suffrage parade brought women from around the country to Washington, D.C., in a show of determination to obtain the ballot and is the subject of an artifact wall display here. The women in the parade used clothing to communicate their message, a topic we also discussed with Alden O'Brien of the Daughters of the American Revolution Museum in Part I of this post. 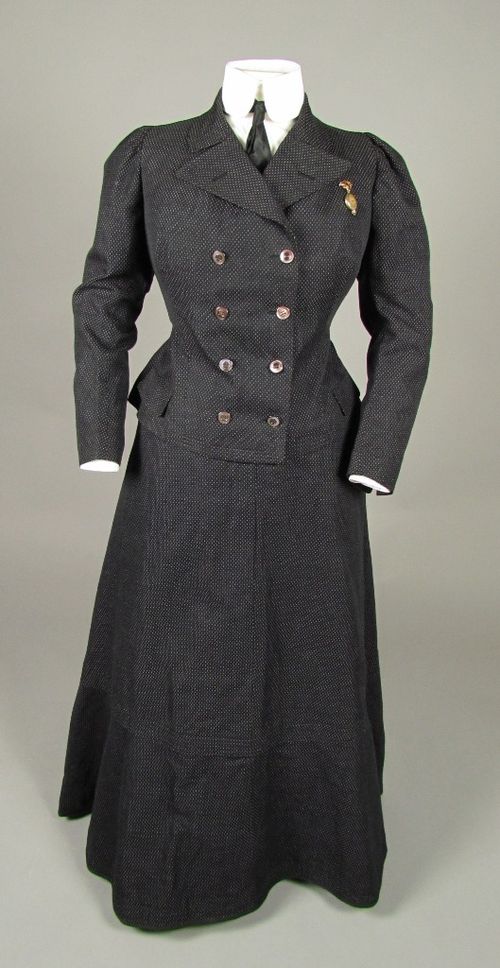 A black-and-white striped cotton tailored suit of about 1905 with masculine style shirtwaist and tie would have been appropriate office wear for any of the thousands of young women finding work as typists and stenographers at the turn of the century.

What new roles and spaces did women occupy in the 1910s? How did clothing reflect this?

It's very relevant that you speak of spaces, because the "New Woman," unlike the Victorian Lady, wanted to get out of the parlor and into the world, and she did this in a number of arenas. But venturing into roles and spaces—public spaces—that had been considered the exclusive privilege of men, caused social anxiety and criticism in a lot of areas.

One set of new activities that interested the New Woman was active sports like golf and tennis and bicycle riding, all of which were new, huge fads emerging about 1890. For these, the new "shirtwaist"(tailored shirt modeled on men's button-down shirts) with ankle- or above-the-ankle-length skirts were perfect for the freedom of movement they needed.

Of course, for bicycling, some daring women braved serious social criticism to wear bicycle bloomers—like knickerbockers—so they could get their legs over the crossbar. You were supposed to wear a skirt over them, because wearing anything that looked like trousers was way too shocking. Not only should ladies not show legs, but MEN wore the pants, and for women to do so seemed quite literally to threaten the natural order of society. Men wore pants and had the power in male-female relations; if women wore pants, people feared the next thing is they’d be dominating their henpecked husbands. So bloomers were really considered threatening to the fabric of society!

Instead of clothing adapting, bike designs had to. Ladies' bikes without the crossbar, and with guards on gears and wheels to prevent skirts from getting tangled, allowed women to keep their skirts while riding. 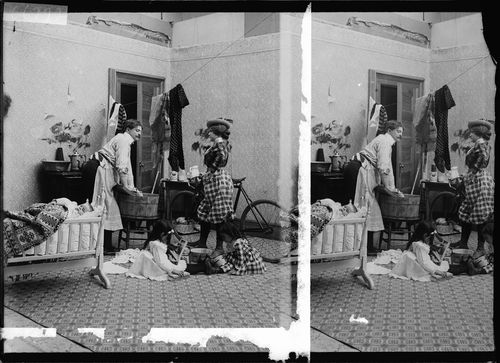 Stereograph image from the Underwood & Underwood Glass Stereograph Collection, 1895-1921, part of our Archives Center. Record information: "An example of a stereograph which pokes fun at the domestic upheavals caused by the ascent of the "New Woman." This emancipated woman is preparing to ride her bicycle after giving instructions on laundry and child-rearing to her confused husband, wearing an apron."

Many New Women were also attending college, not a majority, but a significant increase from a generation ago; women's college campuses were a new space where young women could be themselves, pursue their intellectual interests, and have close friendships in a female community, which we know from letters and memoirs was hugely rewarding to them. On campuses, the "College girl" or "college co-ed" could relax a few of the rules of sartorial etiquette, like not wearing hats outdoors, and wearing basketball bloomers—worn in a gym without male onlookers, bloomers were perfectly OK.

Other new women were entering the white-collar workplace as typists and stenographers, and these offices were spaces dominated by men, where women had to prove themselves by wearing very tailored, masculine-styled skirt suits with plain shirtwaists and ties similar to men's ties. To wear feminine styles in the office would suggest you were there to catch a husband, not do a serious job.

Also, many women of all ages, not just the young, unmarried ones that the stereotype usually identified, were getting involved in public policy issues and social reform, from suffrage to temperance to labor reform—all kinds of things. 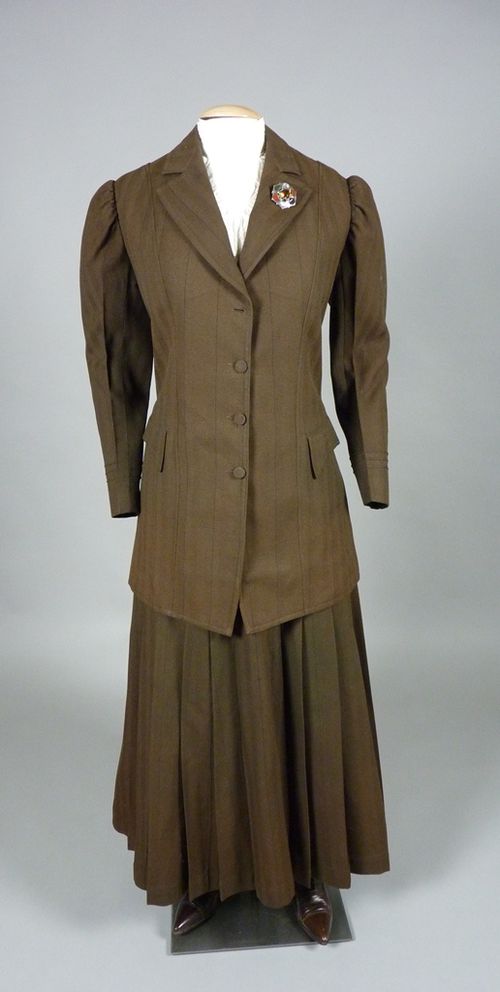 A brown tweed tailored suit of 1908, showing the beginning of a more streamlined silhouette, and with a more practical hemline slightly above the ankle, worn with an embroidered cotton dickey. Daughters of the American Revolution Museum.

How dramatic were the changes in women's fashion during the 1900s-1910s? Was there a gradual shift away from layered, heavily draped Victorian outfits or a quick transition?

The timeline section of the exhibit shows that in a way, it was gradual—if you just look from one outfit to the next, it's a minor shift of sleeves getting puffier or simpler, or other small details changing.

Yet when you stand back and look at the 30 years from 1890 to 1920, you see a huge change, because the general trend has been to simplify and streamline and eventually to get hems above the ankle.

That said, there are a few years that seem like larger turning points. From 1907 to 1908, you see a noticeable shift in the silhouette, which suddenly becomes significantly slimmer. At that same moment, the waistline goes up a little in an "empire revival" style that lengthens the legs and torso, accentuating the long slim line that’s coming in. Then again in 1915, although skirts get a bit fuller, their length suddenly shortens to a few inches above the ankle. 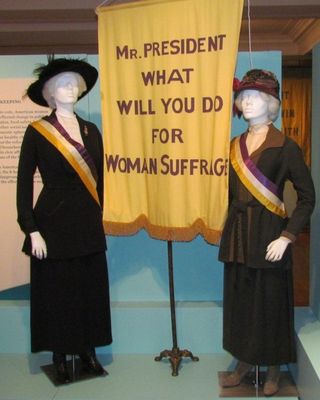 Alden O'Brien is the Curator of Costume and Textiles at the Daughters of the American Revolution Museum in Washington, DC, and curated the Fashioning the New Woman exhibition on view there through August 31, 2013. To learn more about the 1913 suffrage parade, read our post on Alice Paul, and explore our woman suffrage collections.