Talking back to the museum

Love debating about historical topics? This post by three of the museum's educators is for you.

We're always looking for ways to make history real and personal to our visitors both in the museum and online. Our TalkBack History program gets visitors at the museum as well as our online guests to do just that: connect to American history and to one another using very different media. The results can be surprisingly inspirational.

On February 22, we asked the following question on our TalkBack History Board: "Today in 1980, the U.S. Olympic Hockey Team defeats the Soviet Union at Lake Placid, 4-3. After this 'Miracle on Ice,' the U.S. team went on to win the gold medal. What is your favorite Olympic memory?" We posted the same on Facebook and Twitter. 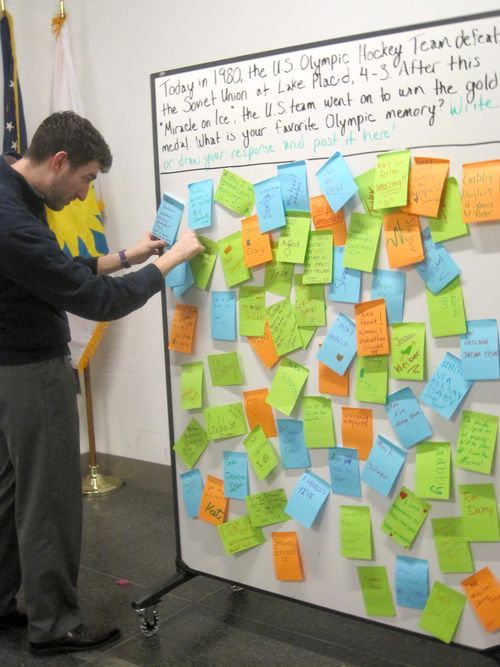 An outpouring of responses on the Talk Back Board

The response was wonderful and meaningful. One of our Facebook fans, Tiffany, posted, "That was an amazing game to watch—thanks for bringing back the memories!" Since the museum just opened a feature case about Olympian Gabrielle Douglas, we were thrilled to see so many people respond with excitement about her victory as their favorite Olympic moment. 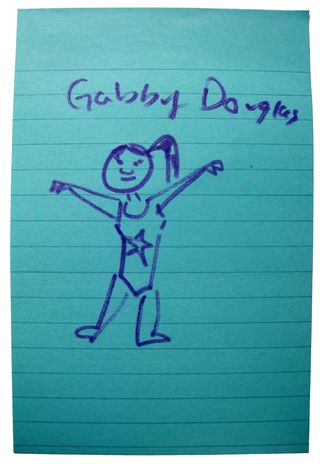 Many other famous wins and individuals were mentioned as well, such as Michael Phelps, Nastia Liukin, Michelle Kwan, and the original "Dream Team." While you might expect most people to answer with outstanding Olympians, many recalled memories of the tradition of the games themselves. Scott and Stephanie's most poignant Olympic memory was goalie Jim Craig, a member of the "Miracle" team, hoisting the U.S. flag after winning the gold and then scanning the crowd for his father's face. 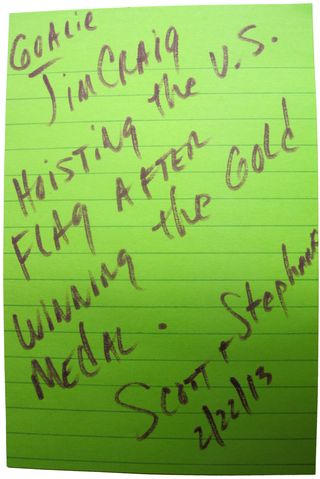 Another visitor mentioned the intensity of watching gymnast Mary Lou Retton score a perfect "10" in her last two events, floor exercise and vault, to barely win the gold and become the first woman outside of Eastern Europe to win a gold medal in gymnastics. Some remember the coaches, like women's basketball coach Anne Donovan, a former Olympian, leading her team to gold at the 2008 Olympics in Beijing. For one, it was the wonder of the opening ceremonies and the parade of nations. 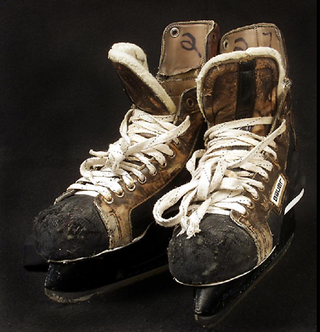 Skates were worn by Phil Verchota (number 27) in the "miracle on ice" game. While it was the win against the Finns that cinched the Gold, the defeat of the Soviet team in the semifinals captured the hearts and imaginations of Americans during a time of cold war tensions.

Overall, the Olympic Games inspire hope, community, and peace in a coming together of brotherhood and sportsmanship. As one person described the event on Facebook, it was, "a moment the World was One, and cheered." What could be more miraculous than that?

Other questions that have inspired discussion, sometimes harmonious and positive, other times a bit more contentious:

Many of these questions were inspired by an event that happened on that day's date in history, such as the day President Franklin D. Roosevelt signed the executive order leading to the internment of Japanese-Americans or the discovery of gold at Sutter's Mill in California. Typically, the museum's collections include an artifact related to the historical content, such as one of the pieces of gold discovered in California in January 1848 or, in the case of the Japanese-American internment, and entire online exhibition dedicated to the topic. 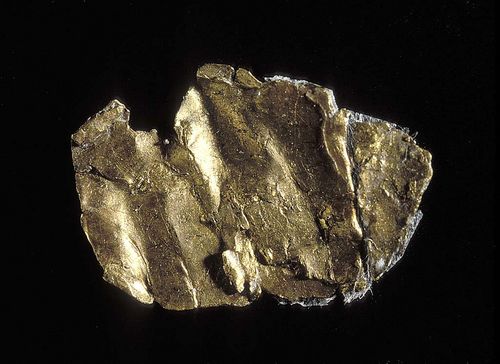 This small piece of yellow metal, weighing just .09 g, is believed to be the first piece of gold discovered in 1848 at Sutter’s Mill in California, launching the gold rush. By August of 1848, as evidence of the find, this piece and other samples of California gold had arrived in Washington, D.C., for delivery to President James K. Polk and for preservation at the National Institute. Within weeks, President Polk formally declared to Congress that gold had been discovered in California. 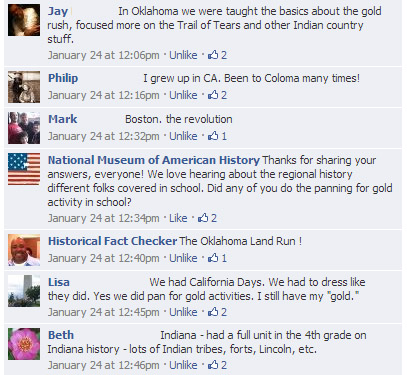 Our hope is that our collection informs the discussion and inspires deeper reflection or inspiration. We’ve noticed that asking about your favorite historical figure, song, movie, or book often triggers a high volume of responses while questions about the legacy or critical meaning of a historic event can sometimes be harder to respond to. Whether written in 140 characters on Twitter, a quickly-typed response on Facebook, or scrawled on a post-it note during a busy museum visit, we love hearing from you and are frequently amazed by the thoughtfulness of the comments you share.

But we're curious about one more thing: do you expect to "talk back" to the museum? How important to you is it to share your own opinions with the museum or read those others have left? As social media tools change the museum's relationship with the outside world, we want to hear from you, so share your answer with us!

MK Macko is the museum's daily programs floor manager and a graduate student at The George Washington University Museum Studies program. Ellen Roth is an intern who works on daily programs such as the Talk Back Board. Erin Blasco is an education specialist in the museum's New Media Department.