Weekends in the past: The life of a reenactor

On the anniversary of the Battles of Lexington and Concord, intern Matthew Skic explains why he's a "weekend warrior" and how he connects with Revolutionary War history. Find out more about our internship opportunities online.

When I come in to the museum each week, I often have a unique story to tell. After all, most people don't spend the weekend in the bitter cold of Valley Forge, hand-tailoring waistcoats, or practicing the fife, a six-holed wooden musical instrument. My weekend adventures are uncommon because I am a Revolutionary War reenactor.

My curatorial internship at the museum relates to the late 18th century, a period with which I am familiar due to the research my hobby demands. My duties include updating the museum's electronic records of a collection of late 18th century and early 19th century decorative creamware pitchers. Originally made in England for sale on the American market, these pitchers are decorated with images of American ships, soldiers, and even Founding Fathers. 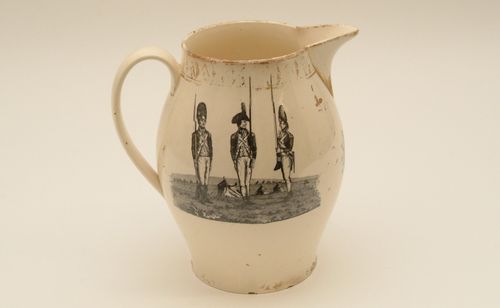 A creamware pitcher in the museum's collection. It depicts three soldiers at camp wearing uniforms similar to those worn by the British Army during the 1790s

Each creamware object is a window into the popular events, people, and places of the early United States. I examine the details of each image, looking for clues, such as uniform details, to determine who designed the image, what year it is from, etc. These images are often supposed to represent members of the Continental Army or members of the army or militia of the United States during the last two decades of the 18th century. However, my knowledge of uniforms tells me that the English artists who placed the images on the creamware probably reused images of British soldiers, sometimes re-coloring their coats to make them look like American soldiers. While working on this project, I often refer back to what I have learned about material culture in ten years of reenacting. 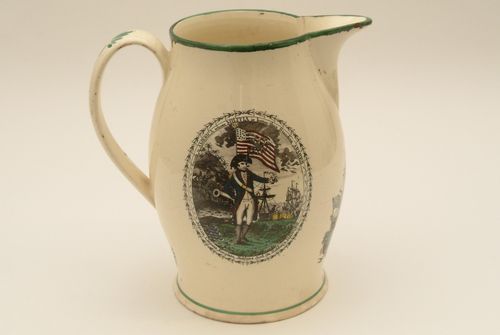 A depiction of an American militia officer, likely based on a British soldier with the uniform colors altered, on this creamware pitcher in the museum's collection

By age 11, I had begun reenacting (also known as living history). Growing up among the Revolutionary War sites of New Jersey, I was drawn to this history. My home in Hopewell is just a few miles away from where George Washington crossed the Delaware River. 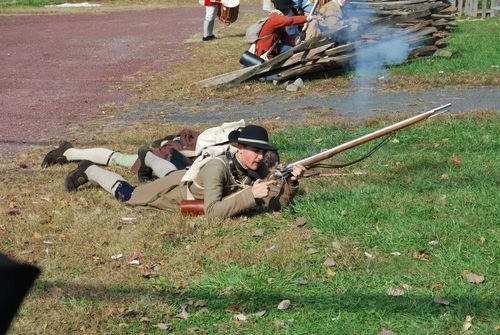 Me as a private in the Bergen County Militia

When I started doing living history, my father and I joined a reenactment unit that recreates an original company of militia commanded by Captain John Outwater, part of the Bergen County Militia Regiment in northern New Jersey. In order to portray a member of the militia as accurately as possible, I have spent time in libraries and the New Jersey State Archives trying to piece together the experiences of these particular soldiers. The reproduction clothing and gear that I carry is handmade or hand sewn using reproduction material based on surviving examples from that time period or contemporary written descriptions of objects. I have spent years developing skills such as sewing and leather working so I can accurately portray these soldiers.

Reenacting also involves educating. When I travel to battlefields and historic sites for living history events, I answer visitors' questions and feed their curiosity. They are eager to use all of their senses to learn American history. When I travel outside of New Jersey for an event, I often adapt my portrayal to the local history, an opportunity to educate a new audience about the 18th century. 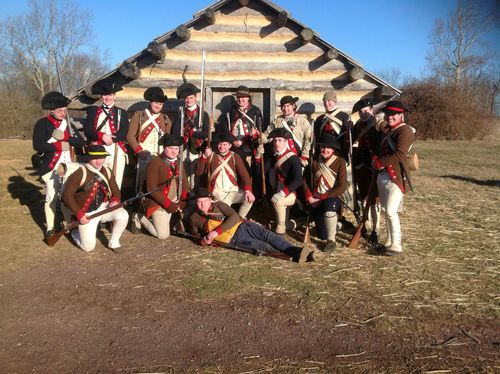 As a Continental Soldier (kneeling, right) at Valley Forge

As a history student at American University in Washington, D.C., I joined a unit that recreates the experiences of loyalists from the Chesapeake region of Virginia. Recently, I slept in the recreated soldiers’ huts at Valley Forge while portraying a soldier in the Continental Army and even traveled to Boston to participate in the recreation of the "Boston Massacre." 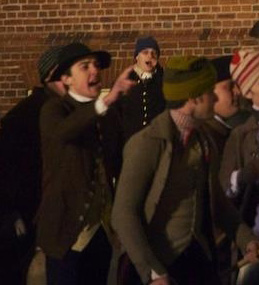 Me (left) at the "Boston Massacre"

Needless to say, when people ask what I did this past weekend, I never give a dull answer.

Matthew Skic is an intern in the division of Home and Community Life and is a history major at American University in Washington, D.C.