Editor's note: In this guest post, middle school teacher Suzanne Hadidi describes how she used portraits by artist Robert Weingarten to help students express themselves and better understand each other. 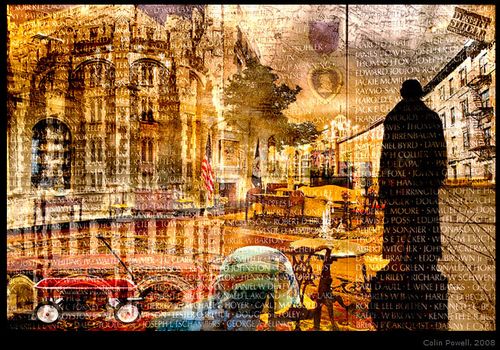 In June of 2012, I had the opportunity to participate in the National Museum of American History's first Teach-it-Forward seminar for teachers in the Washington, D.C., metro area. During the seminar, we visited a new exhibit, Pushing Boundaries: Portraits by Robert Weingarten, which was enhanced by a discussion with the curator of the exhibit, Shannon Perich. As soon as I entered the gallery, I could see a variety of teaching opportunities. The portraits themselves held personal information about the subjects without the names of the subjects being revealed. The images of the subjects' life, achievements, interests, and special moments provide a range of emotions which lead to insightful thinking, reflection, and introspection on one’s own life.

I could see the faces of my students in each portrait. I could see their world open up to possibilities "unknown." In addition to the portraits, a personal letter from each subject was sent to the artist, Robert Weingarten. The letters were as diverse in writing style as in content. Knowing I needed to spend more time to create lessons which would fully reflect the meaning of the exhibition, at a later date I went back to the exhibit and took photographs of the letters. The letters became an important part of my Weingarten lessons. The exhibit opened up a whole new canvas to differentiate instruction and creatively incorporate the Common Core Standards for English/Language Arts. 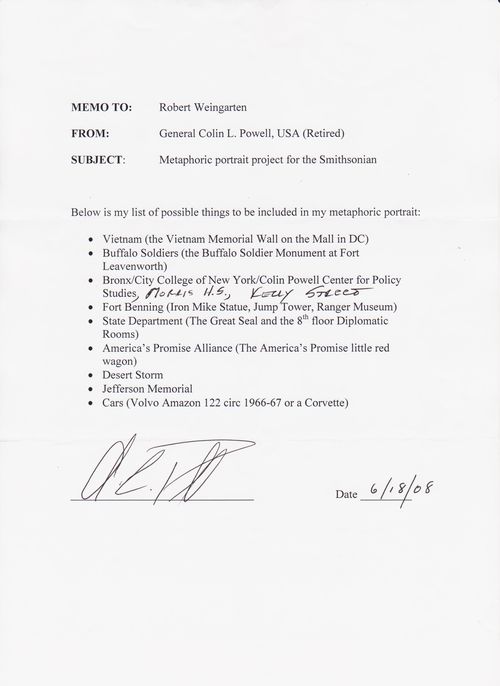 Letter from Powell describing his selected objects for the portrait

Our Weingarten lessons began with a visual literacy strategy—See Think Wonder—where students recorded objects that they saw, what the portrait made them think about, and further questions or associations with the images. Our next lesson incorporated a lesson learned at the Teach-it-Forward seminar, using adjective cards to describe a portrait, in which students identified items in the portraits that they thought were valuable, accidental, sentimental, or held other similar qualities. 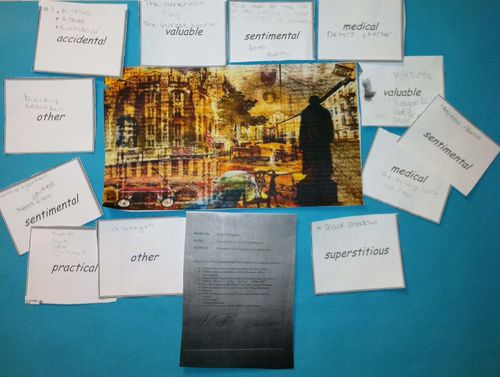 Our third Weingarten lesson involved students listening to a podcast by Shannon Perich, discussing the Colin Powell portrait as well as a photograph of a Native American woman. Students were asked to listen and write what they learned from each image.

Example student response from the Powell portrait:
What can you learn about him or her from the photographs?
Colin Powell wanted to change the world.
Is there anything that stands out to you about the way the portraits are framed?
He looks like he was busy and his life means something.

As the lessons continued, students became more involved with Robert Weingarten. They wanted to know more about his art as well as who he was. I became more involved as a teacher myself. I could feel the emotional and educational impact of this lesson journey I had taken. I couldn't wait to see my students come through the door. Incorporating parts of the Common Core Standards to the lessons, "They habitually perform the critical reading necessary to pick carefully through the staggering amount of information available today in print and digitally. They actively seek the wide, deep, and thoughtful engagement with high-quality literary and informational texts that builds knowledge, enlarges experience, and broadens worldviews." It became more and more clear—my students were "hooked."

Our next lesson was the clincher. I had students observe letters and portraits of eight additional Weingarten subjects. My sixth graders' minds were now open to expose themselves in their own "personal portrait." For the final project, each student wrote his or her own "Dear Mr. Weingarten" letter. Each letter to Mr. Weingarten included at least five items which represented who they are. 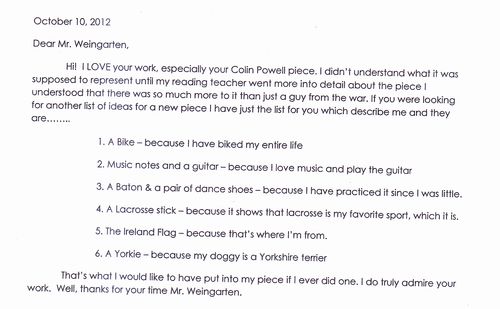 A student's letter to Weingarten 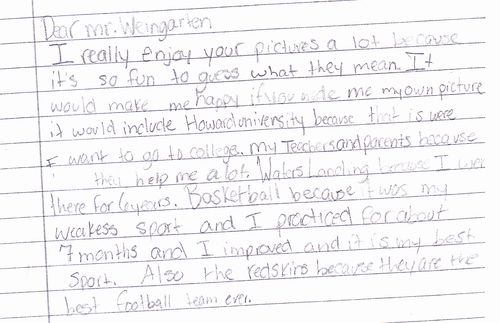 Letter to Weingarten by a student. In the letter, the student asks Weingarten to include an image of Howard University, "because that is where I want to go to college."

They were also responsible for drawing a personal portrait that connected to their letter. The thought, quality, and the range of information each student shared went beyond anything I could have imagined. I learned so much about each individual student. That information still guides me today. I think about their connections to their family, religion, music, sports. I believe each child is their own portrait. Their letters and portraits serve as a constant reminder of how important personal connections are as a teacher. 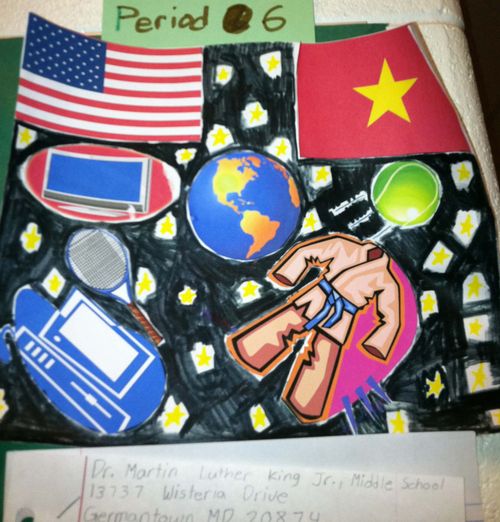 As a sixth grade teacher I plan on using and further developing the Weingarten lessons to learn about each and every student as they transition to middle school. I'm looking forward to knowing what makes each of my future students unique in his or her own right. I am also planning on sharing this lesson with other middle school teachers in Montgomery County, Maryland.

For additional resources on these unique portraits, see the Weingarten Portrait blog series and for ideas for integrating this activity into a beginning- or end-of-year activity, see the post Who Are You? In Five Objects. 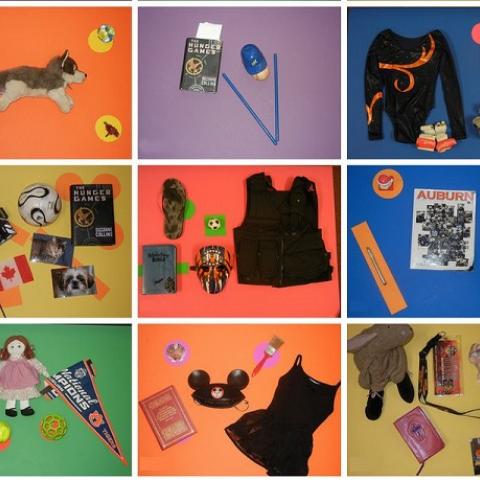 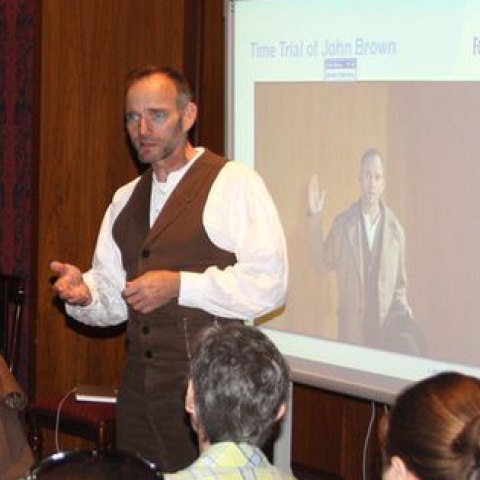 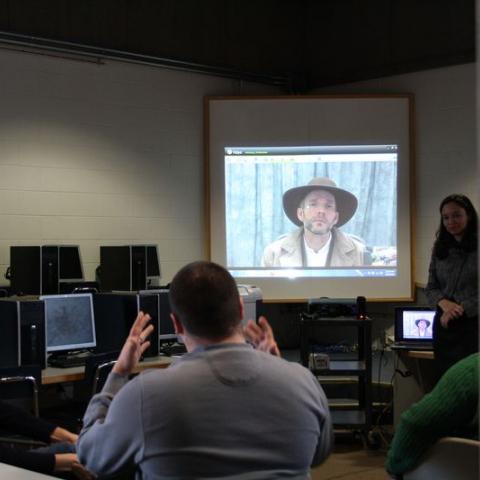 It comes full circle
Editor's note: This 2012 blog post profiles an educational program no longer offered by the museum. Visit our Education and Impact page to...