You asked, we answered: What did soldiers eat during the Revolutionary War?

After answering a question about what may have been in the pockets of Revolutionary War soldiers, another Revolutionary War question came in from a Facebook follower. Our answer by Marko Zlatich, a longtime volunteer in the museum's Division of Armed Forces History. 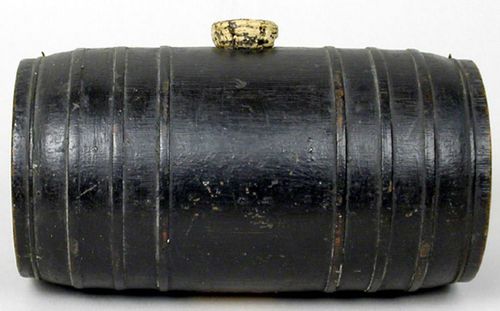 Barrel-shaped water canteens were uncommon. Their size and awkward shape made them impractical for most soldiers. It is likely that such a canteen would have been owned by a militia man who was called up and merely took what was available to him.

Even before a food supply system was organized, on June 10, 1775, the Massachusetts Provincial Council set the daily allowance or ration for its troops in Boston as: 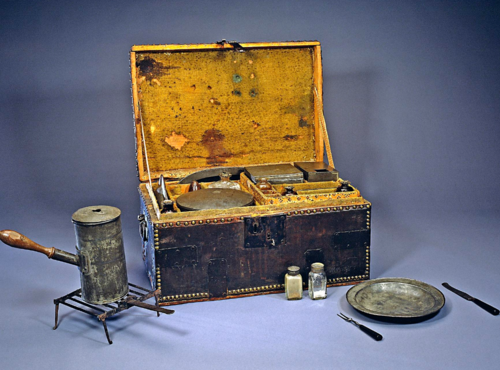 George Washington's well-appointed personal camp chest, or "mess kit," enabled him to dine in a manner reflecting his position as commander of the Continental Army.

According to The Private Soldier Under Washington, by Charles Knowles Bolton (New York, Scribner's, 1902): "Substantially the same ration was approved by Congress November 4, 1775, but with 'or cider' after the word 'beer.'"

In time, the ration changed due to problems with transporting the rations to the soldiers. For example, in spring of 1778, at Valley Forge, General Washington ordered that the 12,000 men encamped there, each was to receive daily: 1-1/2 pounds of flour or bread, 1 pound of beef or fish, 3/4 pound of pork, and 1 gill of whiskey or spirit; or 1-1/2 pounds of flour, 1/2 pound or pork or bacon, 1/2 pint of peas or beans, and 1 gill of whiskey or spirits, as or when they were available.

When in camp, the soldiers were housed in tents, except those in cold areas during winter; however, the basic plan was for six soldiers to share either a tent or a "hut" and, as at sea, the six created a "mess" or an eating unit which received the rations fit or available for six men and then cooked the food themselves.

Where soldiers had families on campaign with them, those women who were considered as companions for the men were also included in the rations and usually they served as cooks for their mess. A Commissary General of Purchases was appointed by the Continental Congress to arrange for the purchase of rations and their transport.

Do you have a question about American history you’d like answered? Ask us on Facebook or Twitter and we'll do our best to answer. Marko Zlatich also volunteers at the Society of the Cincinnati Library.

Posted in Food History, From the Collections, You Asked, We Answer