How can there be two Star-Spangled Banners? Education Specialist Naomi Coquillon takes us on a tour of the history of the flag, the anthem, and our nation.

Living in Maryland, my career has followed the trail of the War of 1812. My first job as a museum educator was at the Maryland Historical Society (MdHS) in Baltimore, the home of the Star-Spangled Banner. 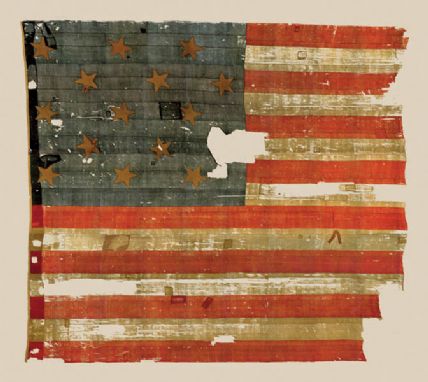 Star-Spangled Banner at the National Museum of American History

Wait, that can't be right, isn't the National Museum of American History the home of the Star-Spangled Banner? Well, yes, they both are. As many visitors to this museum know, the central object in our collection is the garrison flag that was raised over Fort McHenry after the Battle of Baltimore, and that inspired our national anthem. Originally 30'x42, the flag was large enough to be seen by Maryland lawyer Francis Scott Key from several miles out in Baltimore harbor after a night of intense shelling. The flag is a "must see" for many of our millions of visitors each year. The "other" Star-Spangled Banner is an original manuscript copy of the song on view at MdHS. 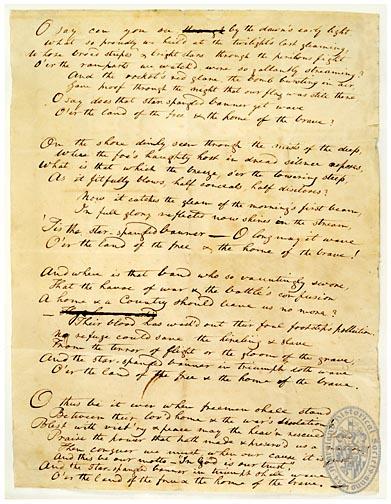 But, what of the story behind the flag? The War of 1812 has been variously titled the second American Revolution and in a recent book by historian Alan Taylor, the "Civil War of 1812." The complexity of the war's causes and the lack of clear advantages gained or territory won at its end have caused some to ignore its legacy: that is, this was a moment that helped to bind the nation and to forge a sense of shared purpose. Although the Star-Spangled Banner did not become the national anthem until 1931, the song was popular from its earliest days, and remains so in its clear explication of the nation that we want to be: steadfast and unyielding, "the land of the free and the home of the brave." 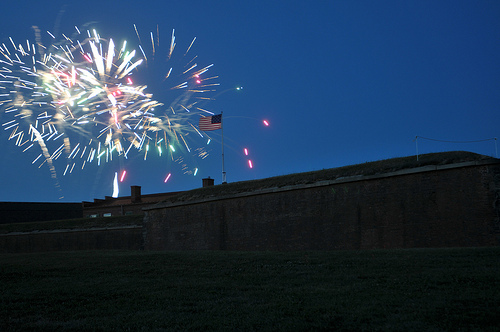 Fireworks over Fort McHenry. Photo by the U.S. Navy via the creative commons license.

I doubt many of our visitors realize how close they are to tracing the story of the Battle of Baltimore and the larger war when they come here to see the flag. While here, be sure to try your hand at folding the flag or meet Mary Pickersgill, the woman who sewed the Star-Spangled Banner and hear about her life in Baltimore during the war, but then visit the Star-Spangled Banner Flag House in Baltimore, to see just what a task it was to create this flag in the tiny rowhouses of the early 19th century. Baltimore is a short train ride or drive north, where you can also visit Fort McHenry to learn about the Battle, explore their new interactive visitor center, or just sit by the water and enjoy the breeze and views of the city. It's a popular spot for Baltimoreans to run, walk their dogs, or enjoy a picnic and it's no surprise that I have a soft spot for it—after many happy times at the Fort, my fiance and I got engaged there a few years ago. 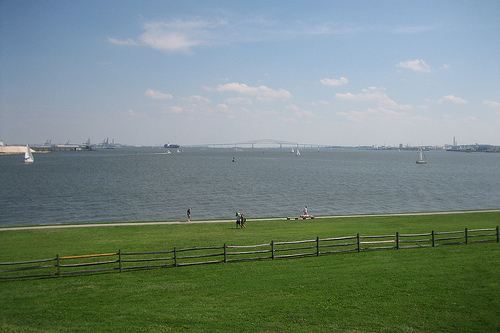 A view of the Baltimore harbor from Fort McHenry by Flickr user r.j.wagner via the creative commons license.

Next, visit MdHS, which is just a few blocks farther north. The museum includes a renowned collection of Peale family portraits of some of the most famous figures from the war, but also artifacts from Baltimore’s days as a center of shipbuilding, including the fast moving vessels called clipper ships that helped Baltimore gain its fame as a nest of pirates.

The National Museum of American History, Fort McHenry, and the Maryland Historical Society are all part of the National Park Service's Star-Spangled Banner National Historic Trail. You can learn about the Chesapeake campaign, which included the Battle of Baltimore and the burning of the White House, and get your National Park Service passport stamped along the way. If you can't make it to the Washington, DC area this summer, be sure to mark your calendars for the summer of 2014, when the region will gear up to celebrate the bicentennial of the Battle of Baltimore in September.

Even if you're not able to explore the Chesapeake region's 1812 history in person, there are plenty of opportunities online to learn the story of the flag, meet Mary Pickersgill, try your hand at holding Fort McHenry in this interactive from Fort McHenry and more. Here's wishing you a star-spangled summer!

Naomi Coquillon is an education specialist at the National Museum of American History. She has also blogged about other types of trips, such as the "unscripted" field trip.