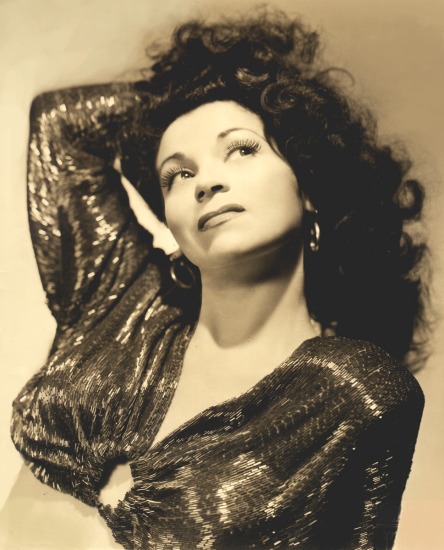 "I was the original J. Lo.," Costello said at a 2011 Smithsonian donation ceremony.

Diosa Costello, known as "The Latin Bombshell," died in her sleep yesterday at the age of 100. In her charismatic performances on Broadway, in films, in nightclubs, and on records, she always exuded unparalleled electricity—a joie de vivre that infused her passion for performing.

As a theater historian, I first became acquainted with her work through the legacy she created on Broadway and I was fortunate to be associated with the reissue on CD of her recordings of songs from Rodgers and Hart's 1938 musical comedy Too Many Girls. In director Joshua Logan's memoir, I learned of her performance as Bloody Mary in the national tour and Broadway production of South Pacific and how her wiry frame and frenetic performance style closely matched author James Michener's original conception of the character. And on television, in broadcasts of the films They Met in Argentina and Miss Sadie Thompson, I witnessed her fiery yet comic style.

Through the excellent detective work of Cornell University scholar Frederic Gleach, my colleague, curator Marvette Perez and I had the great opportunity to meet her in 2006 at her home in Las Vegas, Nevada, and subsequently had a public interview with her at a theater on the campus of The University of Nevada - Las Vegas. Over the course of an hour-long conversation, she recalled that her love of singing and dancing started at the age of five in her native Puerto Rico.

Coming to New York as an adolescent with her family, she soon found herself in the chorus of a theater in Spanish Harlem and making records, singing with Pedro Flores' Orchestra. Diosa then established herself as a nightclub entertainer, appearing at New York's famed La Conga club. While there, she teamed with a then-unknown singer and conga player named Desi Arnaz. She saltily recalled persuading producers to hire him, telling them, "well, he plays the guitar—not so good—and he plays the congas—not so good—but look at that face! The girls will love him!"

She regaled us and the audience with stories of her long career, recalling her professional associations with many of the show business elite: actress and singer Carmen Miranda, actress Rita Hayworth, producer-director George Abbott, comedian Rodney Daingerfield, and actress Goldie Hawn, who she hired as a young dancer for a tour of Puerto Rico.

Several years later, in 2011, Diosa came to the National Mall to donate 11 of her stage costumes to the museum and gave us another public interview. She revisited her past with a clear-eyed stance, punctuating her recollections with her characteristic candor and boundless energy, once again revealing herself to be a true legend of entertainment history.

Dwight Blocker Bowers is Curator of the Entertainment Collection at the National Museum of American History. Read an interview with Diosa from Smithsonian Magazine.