Tell us what you think about this blog!

Interested in helping us improve our blog? We appreciate your feedback! Please take three minutes to complete this online survey.

Interested in interning at the museum? Intern Addie Maguire emerged from her riveting research in the Maritime Collections long enough to share her work.

I opened the worn and weathered logbook and was transported back to an exhilarating era of faraway lands, secret trade, and international incidents. From the first page, I was hooked.

In my first weeks as an intern at the National Museum of American History, my supervisor, Maritime Curator Paul Johnston, asked me to research the logbook of the brig Ea, a vessel suspected of involvement in the opium trade. A brig is square rigged ship with two masts; the Ea was built in Baltimore, Maryland, circa 1815 as a merchant vessel during one of America's busiest trading eras. Doctor Johnston accessioned the logbook because the Ea was a local ship, and believed it would serve as a good representation of commerce at the time. The name of this vessel, Ea, is unusual—we can only surmise the two letters are the initials of an owner's loved one. 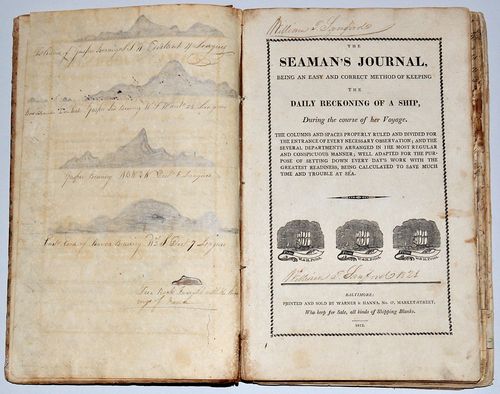 The logbook from the ship "Ea" with log keeper William Sanford's signature, dated 1821

The ship's logbook began on February 24, 1821, when the ship departed from Baltimore on a trading voyage to Canton, China. According to the log keeper, William Sanford, the ship reached Canton in August 1821, and left again on November 28, 1821, heading for Amsterdam.

By 1793, the British East India Co. had a monopoly on the opium trade from India to China; around this time the number of Chinese and British who recreationally smoked opium reached an all time high (no pun intended). The Chinese Emperor banned opium in 1799, making trade illegal. In the early 1800s, though, American traders realized the high profits involved and began to smuggle opium from Turkey into China. The commodity passed primarily through the complicated port of Canton, where it was bought by shady merchants on islands in the bay. 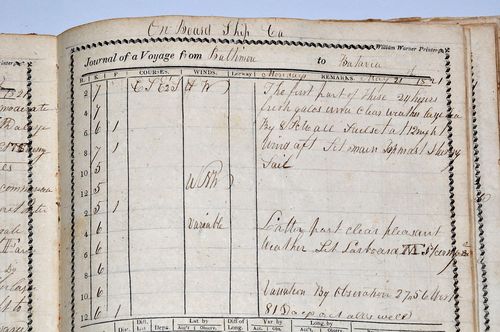 Entry from the logbook dated May 21, 1821, recorded as having "clear pleasant weather"

Perkins & Company of Boston, Massachusetts, was a major American trading company with a firm in Canton; in fact, the company would use rice cargoes to cover up opium transactions. John Perkins Cushing recorded the arrival and departure of trading ships, including the Ea.

After much searching to determine if the Ea participated in opium trading, I found a single sentence in an obscure book, citing Perkins & Company records: "…The Ea, Captain Alexander Clark, [arrived] with between 140 and 160 piculs of the drug [opium]." A picul is an ancient Asian standard of weight and is approximately 133.3 lbs.; thus the Ea was smuggling an astonishing 20,000 pounds of opium! 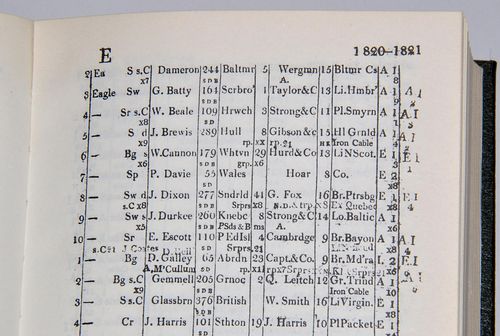 Digging deeper, I found a report of the United States Secretary of State regarding an international issue involving the Ea and Captain Clark. On September 25, 1821, while the Ea was anchored at Canton, an Italian crewman on board another American merchant vessel was accused of killing a Chinese woman. Captain Clark signed as witness of the event, with multiple other ship captains. Political relations between China and the U.S. tensed as the Chinese wanted to execute the Italian sailor and the U.S. stalled for a fair trial. Unfortunately, the Italian was executed. I did not find out any other information about this incident; it was not mentioned in the logbook nor was there mention of any repercussions for Captain Clark.

Many more hours could be spent unraveling the complicated mystery of the Ea. The opium trade was an early example of international drug smuggling and exemplifies the repercussions of a quick profit fueled by addiction. Researching the Ea sparked my fascination for the dark undercurrents of this chapter in American history. There is something fascinating about the stories preserved in a ship's battered logbook, and something enticing about a smuggling brig setting sail for the far ports of Canton. 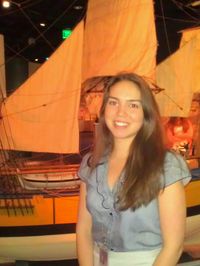 Addie checking our the maritime collection

Addie Maguire was the intern for the Maritime Collections in the Work and Industry Division at the American History Museum in the Spring of 2013. More information about museum internships can be found on our website.