There are more to desks than you might see on the surface. Just as American students have changed over the years, so have their furniture. Intern Alexandra Parker gives us a tour of her favorite 19th century desks in the collection.

When I look at the patent models of school desks in our collection, I can imagine students squirming to leap from their desks and start a fun-filled summer. Just like kids today, 19th century pupils probably did not consider how their desks were made or worry if the height adjusts or if it can fold up or down.

During my internship, I had the opportunity to ponder the design of school desks while researching the rather unexplored territory of 19th century school furniture. I discovered that many teachers and furniture makers of the period were concerned about the construction of students' desks and hoped that they could improve upon school room furniture. 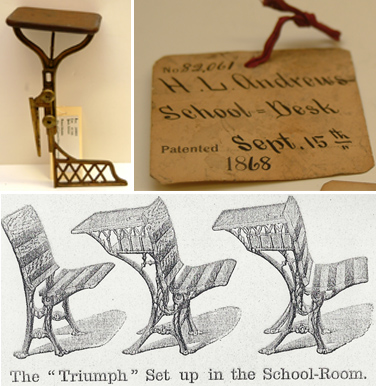 The museum has about 150 patent models of school furniture from the 19th century, part of the education collection in the Division of Home and Community Life. With the rise of public school attendance during this era, it was necessary to come up with good furniture that would last a long time and function properly.

The goals for improvements in school furniture included: curved seats for comfort and proper posture, the ability of the desk and/or seat to fold, and to not be loud or disruptive when moved during room reconfigurations and cleaning. The furniture was to be attractive, economical, and easy to clean, and in case of site assembly easy to construct but durable. There was also a move away from completely wooden desks to incorporate the newly popular cast iron. These issues inspired many to invent new configurations or make minor improvements to existing designs.

Since these patent models are not currently on display, here is a sneak peak at a few that represent the innovative designs in 19th century school furniture and some surprising facts about each.

They could be artistic: 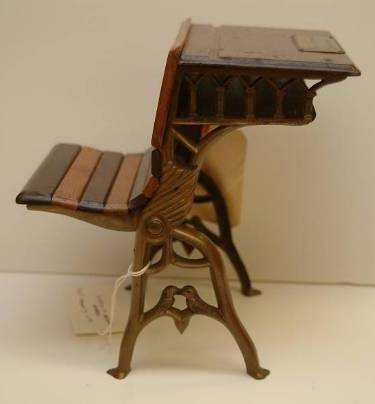 The design became one of the most recognizable school desks of the era. It incorporated Gothic architectural elements, such as pointed arches, in the design. The iron twists toward the base support. Look closely and you can see two iron birds with beaks touching towards the bottom of the legs. The Gothic metalwork elements combined with the different colored slats of wood make this desk a work of art.

The desk was built to fold noiselessly, which was important to reduce classroom distractions. The desk also incorporated a curved seat for lower back support. It has a groove on the desktop for pencils or other writing utensils. There is storage beneath the desktop as well. However, the desk top does not lift up as in other patent models.

1876 Kline, Upton, and Tuttle desk model, both closed and opened

This model was designed to create a neat, substantial, sturdy, convenient, and comfortable school desk. Their invention focused on bracing the frame of the desk. There is a curved slatted backrest and seat which folds up and the desktop behind folds up as well. There is no storage in the desk. 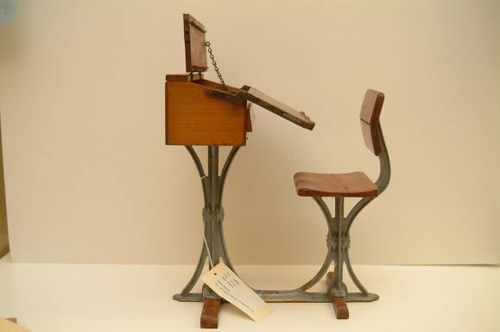 A prolific designer, John Glendenning’s patent connects the desk and chair together on a metal pole base, located at the bottom of the chair and desk. The chair curves and gives back and seat support and is narrow to fit only one person. The desk top can be lifted, as shown, to reveal storage. Both the desk and chair have a metal stem that connects to a frame on the ground.

They can be "triumphant:" 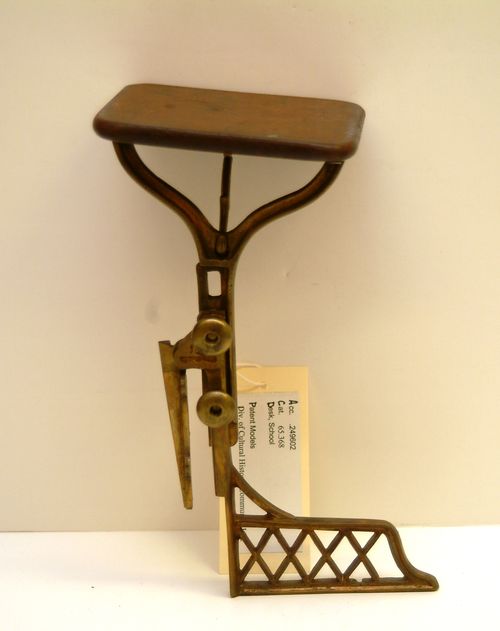 In 1870, this desk was produced by A.H. Andrews & Co., the largest manufacturer of commercial furniture as well as the largest furniture company in Chicago, Illinois, during the 1880s and 1890s. The "Triumph School Desk" was made in six sizes. It had a square wooden top and had three brass legs connected to the bottom of the desk top. The diamond pattern metal work reflects the tracery seen in Gothic revival.

Like many other inventors of school furniture, Andrews' creation was meant to be noiseless. The desk got a good deal of acclaim and was exhibited at the International State Industrial Exposition in Chicago in 1873. It was displayed again at the 1876 Centennial Exposition in Philadelphia, Pennsylvania, where it won an award for "strength, durability, and good form." According to Andrews, he sold over 50,000 of these school desks yearly. 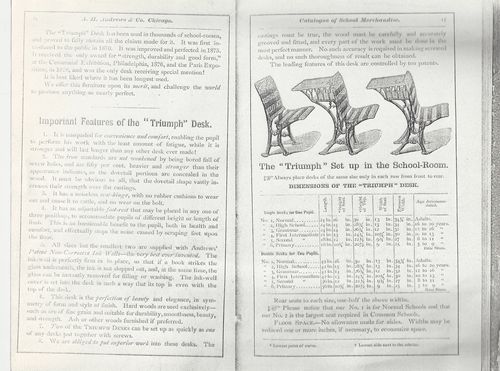 This advertisement is from A. H. Andrews School Catalog, showing how the Triumph school desk was supposed to be set up in the classroom. As you can see, the desk is attached to the back of the seat and the desk top is supported by a row of Gothic arches done in metal, probably brass. Attaching desks to each other was not a popular set up with everyone, as a student in front might disrupt the student behind them, but it did help to create an organized room. 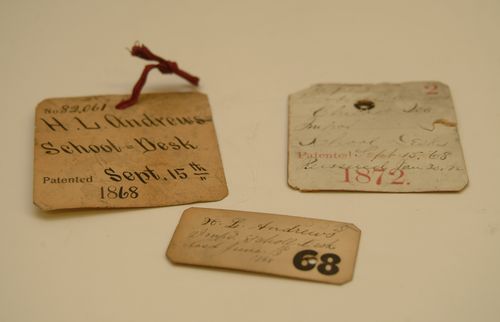 Patent tags included the name of the patentee, object, and date it was patented. Today, most of the desks in the collection still have their patent tags attached. Each is held on by a red ribbon—the origin of the term "red tape."

The modern school desk has changed a great deal since its 19th century predecessors. It may not be made with intricate Gothic metalwork (or even made of wood), but it has clearly been influenced by a past of design and innovation in classroom furniture.

Alexandra Parker is a current graduate student of the Smithsonian-Mason Decorative Arts Program and was a spring intern in the Division of Home and Community Life with the Education Collection, where she worked with associate curator Debbie Schaefer-Jacobs.

Posted in From the Collections, Intern Perspectives, Teaching & Learning 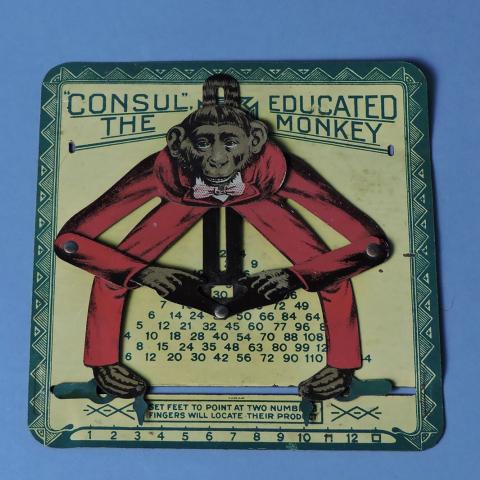 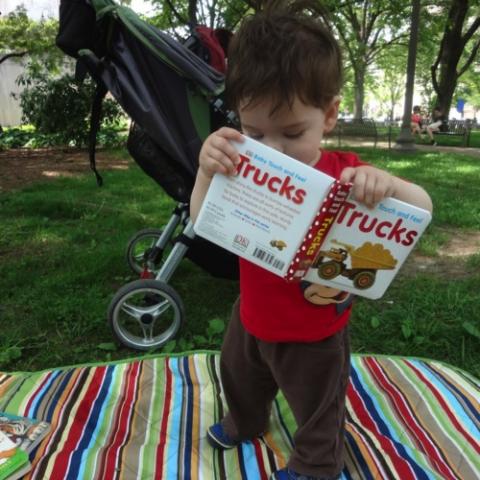 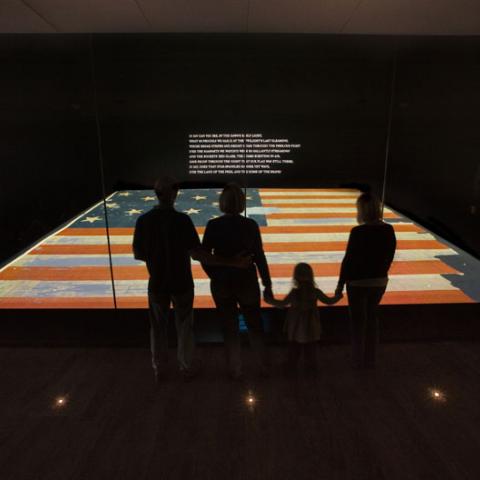 The "unscripted" field trip
In line in the cafeteria recently, I stood behind a young woman in her early teens here on a field trip. She had with her a paper scavenger...