The "Swamp Fox of Missouri" and his protractor

When I first saw this object in the mathematics collections in 2000, I was cataloguing protractors, devices for drawing and measuring angles, and this instrument was both rather ugly and completely unlike the semicircular protractors used by many students. I soon learned that the object fits in the protractor category because it is similar to other 19th- and 20th-century instruments used for making engineering drawings. It is cruder than comparable bevel protractors because it is a patent model, a prototype the inventor submitted with his application for a U.S. patent. 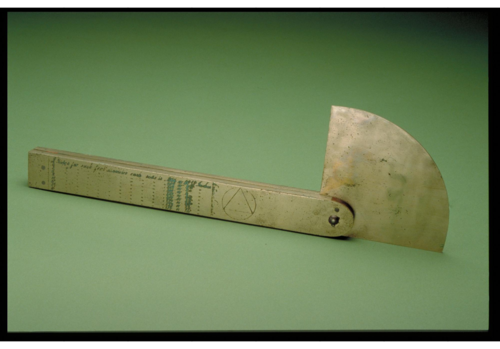 Although I have since written academic articles on how the more familiar form of protractor became a standard fixture of mathematics classrooms, I remain fond of the colorful tale that emerged when I began digging into the life of the patentee. This instrument provides a wonderful example of how a single object can bring together multiple American stories documented by the museum.

The inventor of this protractor, Meriwether Jeff Thompson (1826–1876), grew up in Harpers Ferry, West Virginia. After his plans for a military career were derailed by rejections from West Point and Virginia Military Institute (VMI), he worked in stores in Maryland, Pennsylvania, and Missouri, before settling in St. Joseph, Missouri, in 1848. 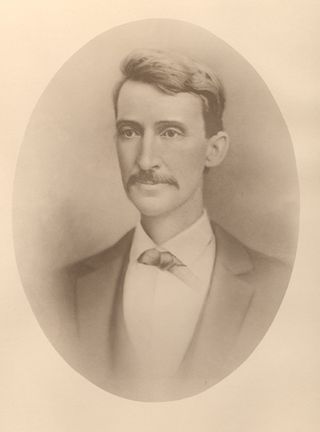 He engaged in several activities, including joining the local militia and helping survey the Hannibal & St. Joseph Railroad. By the time the railroad was finished in 1859, Thompson had become its president, a colonel in the militia, the head of another railroad and of the local gas works, and the mayor of St. Joseph. Surviving photographs suggest his charismatic, energetic, and presumably capable personality, which some chroniclers of his military career have compared to George Custer's.

While he was ascending to all of these leadership positions, Thompson somehow found time to develop a number of inventions. His interest in West Point and VMI, which emphasized training in military engineering, suggests an aptitude for mathematics and its practical applications. He further educated himself in these subjects during his railroad work.

This object—apparently the only invention Thompson ever patented—indicates that he was dissatisfied with existing tools for making the detailed scale drawings that were necessary in all facets of operating a railroad, including surveying routes and maintaining engines and other machines. The ability to draw regular polygons with various numbers of sides at various ratios was also valuable in a number of engineering and military applications. (Sectors were also employed for this activity.)Thompson envisioned selling the instrument to other machinists and engineers, but there is no evidence that it was ever successfully manufactured. The patent model may be the only example of his invention that still exists.

However, Thompson was too occupied with major events in American history to bemoan the failure of this device. St. Joseph was then very significant as a jumping-off point for wagon trains and gold-seekers. On April 3, 1860, Mayor Thompson was called upon to open the Pony Express and evoked the spirit of manifest destiny in his address:

"The day will come when at this very town you may board a train which will take you through to the gold fields, and that within a very few years! More than that, I say that the wilderness which lies between us and that El Dorado will soon blossom as the rose."

The state of Missouri also spanned the fault lines that cracked open when the Civil War began the next year. Thompson's sympathies lay with the Confederacy, and after the attack on Fort Sumter, he tore the Union flag down from the city's post office, an act that may have influenced President Lincoln to send the transcontinental railroad through Omaha, Nebraska, instead of through St. Joseph. Thompson eventually joined the Missouri State Guard where the successful skirmishes he led resulted in the nickname "Swamp Fox of Missouri." 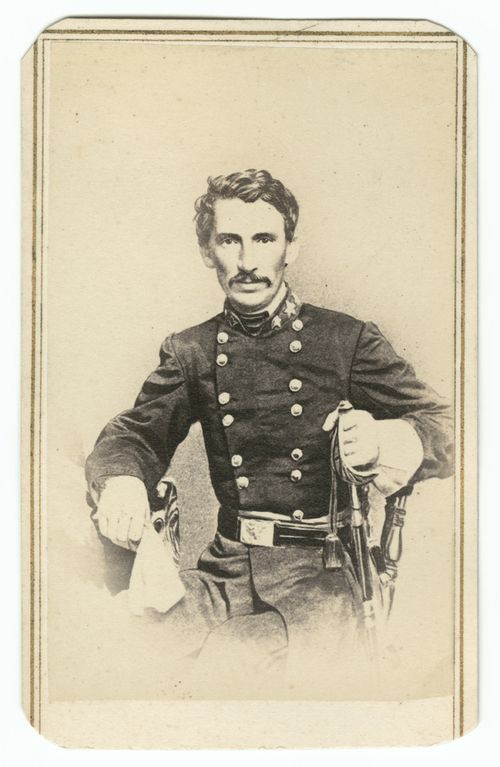 Thompson's career took one more uniquely American turn, as he was among the earlier Southerners who declared loyalty to the Union after the war and thus received an appointment as Surveyor General and Chief State Engineer of Louisiana. He had been captured twice during the war and contracted tuberculosis in one of the prison camps, and was only 50 when he died in 1876.

In this museum, the most fascinating stories can come from unexpected places. This patent model, which at first seemed odd or ugly, provides a window into the dramatic and multifaceted life of Meriwether Jeff Thompson, and the many angles that intersect to create American history.

Amy Ackerberg-Hastings is a project assistant in the Division of Medicine and Science of the National Museum of American History. In 2008, she, Peggy Aldrich Kidwell, and David Lindsay Roberts published Tools of American Mathematics Teaching, 1800–2000, with The Johns Hopkins University Press. Other patent models are on display in the upcoming exhibition, Invention and the Patent Model. See more patent models.