Messages not heard from the podium during the March on Washington

Fifty years after the March on Washington, what we remember about the March may not accurately echo what was said and who spoke—and who didn't. Christopher Wilson, Director of the Program in African American History and Culture, reflects.

More than 200,000 people peacefully demonstrated on the National Mall 50 years ago today in the March on Washington for Jobs and Freedom. Today, we mostly remember that sweltering August day for the sweeping and breathtaking oratory of Rev. Martin Luther King, Jr. and his "I Have a Dream" speech. There is much more to remember and take away, however, from the March a half-century later.

We generally remember the end of King's speech with its eloquent call for a color blind society, but we forget the more radical beginning with its suggestion that the nation had passed a "bad check" to blacks who had come to Washington to cash it, as well as the speech's threatening language warning that the United States should go back to business as usual at its peril. 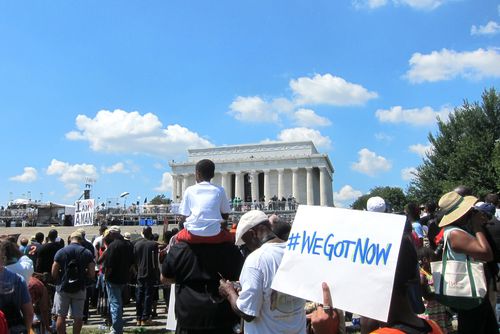 In August 2013, the public commemorated the anniversary of the March on Washington. Photo by AFSC Photos/Neah Monteiro via the Flickr creative commons license.

We remember the March being about high ideals like freedom, justice, and equality, but forget that marchers traveled to the capital city for very specific economic goals like an increase in the minimum wage and a public works campaign to provide jobs for the unemployed. The March, after all, was entitled "for Jobs and Freedom," with "jobs" coming first. We don't think much about people like Bayard Rustin, Anna Hedgeman, A. Philip Randolph and others who made this unprecedented demonstration come together despite immense logistical and political challenges, not the least of which was finding enough common ground issues around which to bring the "Big Six" civil rights organizations together.

In examining the original program for the March, one sees evidence of one of the challenging and confounding issues facing the planning committee. 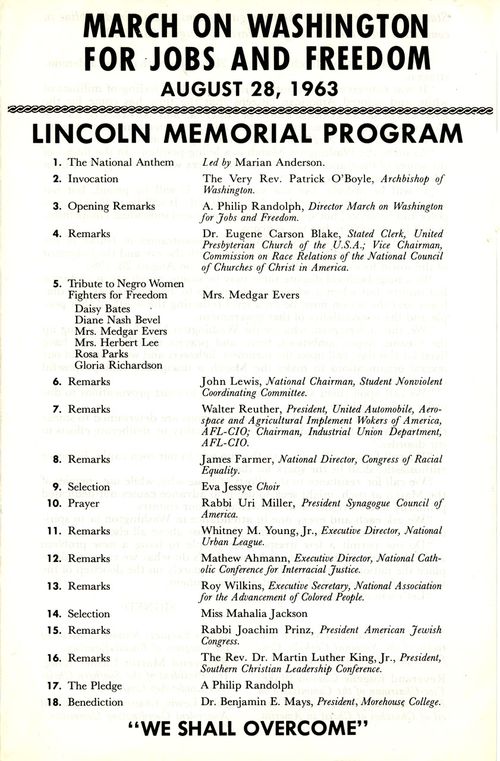 The fifth item on the program, "Tribute to Negro Women Fighters for Freedom" was the compromise solution to the question of whether any women would be asked to speak at the Lincoln Memorial. Women and girls had been integral to the success of the modern civil rights movement since its inception. Women's participation ran the gamut. There were trailblazers of direct action like Rosa Parks or 16 year old Barbara Johns, a plaintiff in the Brown v. Board of Education case. There were women working to organize and grow a movement from a single moment, such as teacher Jo Ann Robinson during the Montgomery Bus Boycott or the young women of Bennett College in Greensboro, North Carolina, who sustained and escalated the sit-in campaign that began at the city's Woolworth's store. And there were established leaders, such as Dorothy Height and Ella Baker. 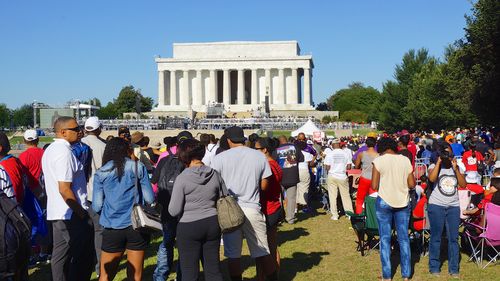 The public gathers near the Lincoln Memorial in August 2013. Photo by Flickr user tedeytan via the creative commons license.

Anna Hedgeman, the lone woman on the March's planning committee, was aghast when she learned in mid-August at the final meetings of the planning team that no woman would speak from the podium. Female singers Marian Anderson and Mahalia Jackson would perform during the program, and the Student Non-Violent Coordinating Committee’s Freedom Singers (including my predecessor at this museum, Bernice Johnson Reagon) and Joan Baez would sing on the preliminary program, but the speakers list was all male. This exclusion of women from the podium reflected the male domination in the leadership of the major civil rights organizations and the position of women in the nation as a whole in 1963, but it did not accurately represent how central women had been to the social and political gains the movement had produced to that point.

The woman nominated to break that barrier and be the only female speaker on the official March of Washington program was Diane Nash. Nash was one of the founders of the Student Nonviolent Coordinating Committee and perhaps the person most responsible for the success of the Freedom Rides in 1961. As a 21 year old college student, she had forcefully questioned Nashville, Tennessee, Mayor Ben West about the morality of segregation, succeeding in his admission in front of TV cameras that the policy he had supported was unethical and wrong. Nash continued to be one of the most powerful and brilliant leaders the movement had produced. In the end, however, she and five other women were recognized from the stage but none were allowed give an address as an official part of the program. 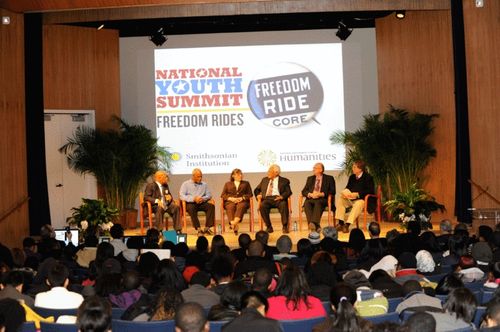 As I've gotten to know Nash over the past several years, I realize what an important contribution her voice would have made. I wish history had witnessed her speech 50 years ago. She represents everything an American hero is supposed to embody. During the movement, she was selfless, committed, and incredibly brave even when her life was in danger. She never backed down from a fight whether it was with Klansmen or the Attorney General of the United States. Once when Bobby Kennedy suggested the activists would have all the money they needed to work on voter registration if they stopped acts of civil disobedience, Nash turned down what she felt was an attempt to buy the students off. When, three weeks after the March, four little girls were murdered by racist terrorists in a church in Birmingham, Alabama, Nash planned a radical, massive protest intended to shut the city down until sweeping political changes were made.

Diane Nash's was an appropriate voice to include 50 years ago, and one that more people should hear today. She is still hard at work for social justice in Chicago, Illinois, where she now lives, and throughout our nation. Her main message is the same today as it was in the 1960s—Democracy is dependent on citizens taking their citizenship to heart and not waiting for someone else to do the heavy lifting. As she said in this video clip from our 2011 National Youth Summit on the Freedom Rides, Nash feels that if ordinary Americans like her had waited for leaders to make a change, "we might still be waiting."

Christopher Wilson is Director of the Program in African American History and Culture at the National Museum of American History. He has also blogged about how we don’t generally remember Frederick Douglass as we should.