The mysterious can of fortune 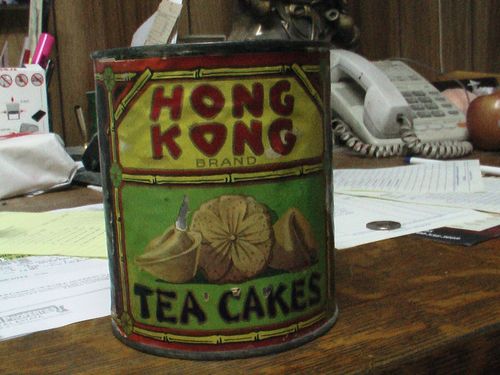 In chapter 10 of her book, Lee faces an unopened can of mysterious Hong Kong brand Tea Cakes in the office of Merlin Lowe, whose father bought the Hong Kong Noodle Company: "'It's never been opened,' he said. I inspected the top of the can and saw that, indeed, it was still sealed. I held it up to my ear and shook. There was the rustle of crunchy confectionery against metal. While the cookies had not all disintegrated into powder, they were definitely not entirely whole anymore. I looked in amazement at this tin can of 60-year-old fortune cookies that had sat in this office all this time. They may very well be the oldest surviving fortune cookies on this planet."

In 2010, Merlin Lowe donated the same can of tea cakes, along with a baker's hat, to the National Museum of American History. For three years at the museum, the can remained unopened and the question lingered: what is inside a can of Hong Kong Tea Cakes from the 1930s?! This was the mystery that we finally solved in the conservation lab. 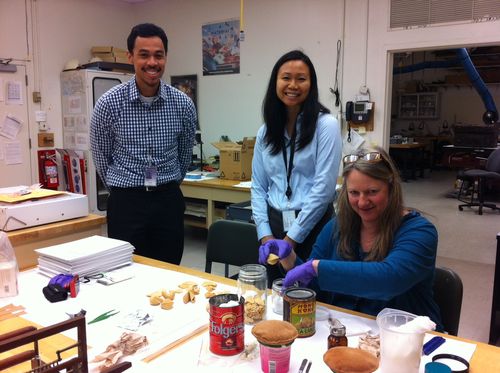 Intern Emilio Eusebio, author and Fellow Chrissy Yee Lau, and Conservator Beth Richwine wait in eager anticipation to see the contents of the can

Curator Noriko Sanefuji, intern Emilio Eusebio, and I went down to the conservatory lab to pop open the lid and remove all of its contents. For preservation purposes, food containers in the museum's collection must be empty—which proved a great opportunity to discover the contents of this mysterious can.

As Conservator Beth Richwine began to pry open the lid, I wondered about all the possibilities. Will there be cakes? Will there be bugs? Will there only be crumbs? As I waited in suspense, I felt like a child longing for a toy (the historian in me) and yet also like an unsuspecting heroine entering a creepy old basement. 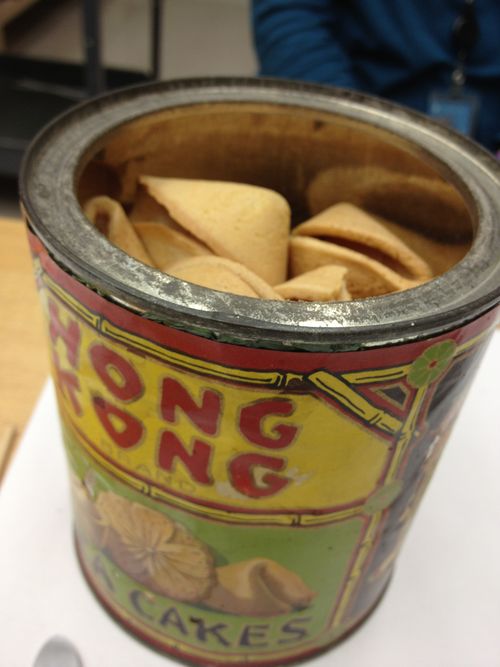 Fortune Cookies! Back in the 1930s, fortune cookies were called "tea cakes." Some say that the old name hearkens back to the Japanese tea cakes which Makoto Hagiwara served at the Golden Gate Japanese Tea Garden in the early 1900s, one likely version of a fortune cookie origins story. Hagiwara had invented the cookie after being reinstated in his position as landscape designer and caretaker of the Japanese Tea Garden, after some accounts state that he was fired because of racism, and placed thank you notes inside the cookies.

Another version of the story, as Merlin Lowe's Hong Kong brand company history would narrate, credits David Jung as the original inventor of the fortune cookie in 1918 in Los Angeles, California. Jung created a cookie to be passed out on the streets for the homeless, with little slips of Bible passages inside. These two accounts are only a few of the many Asian immigrant stories that claim the fortune cookie as an invention of their own in the early 20th century.

By the 1930s, fortune cookies began to gain popularity as a free dessert in Chinese restaurants across America. Opening in 1913 in Los Angeles, California, the Hong Kong Noodle Company began to manufacture fortune cookies in tin cans as the demand for canned foods skyrocketed during World War I and canned foods were widely consumed in American homes. Average middle-class American households could experience Chinese American foods without having to dine at Chinese restaurants.

We were lucky enough to see the original can that Jennifer 8. Lee herself claimed as quite possibly "the oldest surviving fortune cookies on the planet." As the conservator began to remove all of the cookies out of the can, we could see that some remained marvelously intact while other cookies had crumbled. We realized that there were two kinds of cookies—one in the shape of fortune cookies as we now know them today and the other in the shape of a flower.

What kinds of fortune slips did the cookies contain? The conservator began to read a fortune slip, "You will be doomed..." We all thought that was pretty dark for a light-hearted fortune slip—was it the sign of the times after World War I and the Depression? But then she finished reading, "You will be doomed to be happy in your marriage." Sigh of relief and laughter. Interestingly, there were no lotto numbers, which begs the question of when did fortune cookie slips begin to contain lottery numbers? 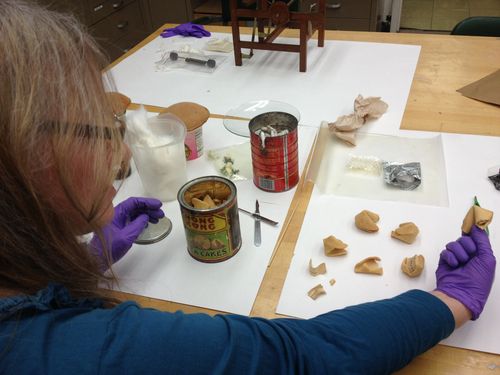 Examining the fortune cookies that date back to the 1930s—some are still intact!

As we saved the cookies in a glass jar and conserved the tin can to be put away in the museum's collections, the cookies and the can sparked more historical questions. Who bought these fortune cookie cans? Since they are no longer around, how successful was their canned cookie business? And why is there a flower shaped cookie alongside the fortune cookies? The mystery is only beginning to unfold. 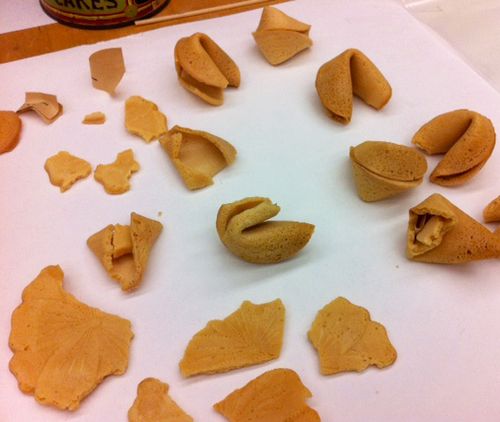 Two types of cookies were found in the can

Find out more as we continue to work on the Sweet and Sour: Chinese Food from Chinatown to Main Street project.

Chrissy Yee Lau is a Goldman Sachs Multicultural Junior Fellow at the National Museum of American History. She received her doctorate in the Department of History at University of California, Santa Barbara, last March. 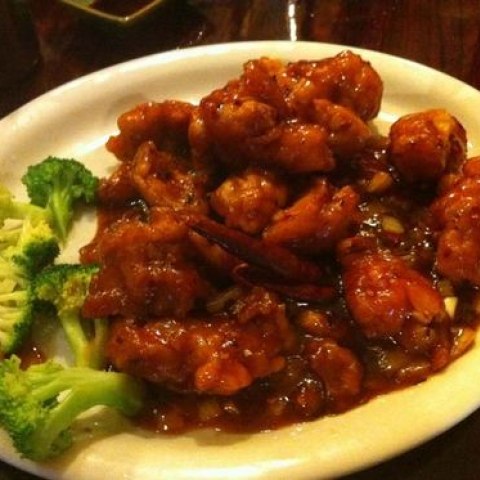 General Tso's Chicken: the most popular Hunanese dish in the USA
Curator’s Note: What started out as a simple research assignment for the Sweet & Sour Initiative turned into an interesting culinary...

Sweet & Sour: Memories of a Chinese restaurant
Do you like Chinese food? What is your favorite dish? Me, I love za jiang mein, it’s an eastern version of spaghetti with meat sauce. For...