Cracking the closed society of higher education: Integrating the University of Mississippi

Not every college orientation tour takes a moment to point out bullet holes on the walls of the chancellor's office, but my tour at the University of Mississippi did. The university, also called Ole Miss, proudly displays the intact bullet holes on the walls of the Lyceum—I passed them going to class every day. These bullet holes are remnants of a battle that broke out over the integration of James Meredith, the first African American to be accepted at a white college in Mississippi.

After an extensive legal battle, the Supreme Court ruled in 1962 that James Meredith had the right to be enrolled after being denied solely on account of his race. Defiant, Mississippi's governor Ross Barnett belligerently swore to his citizens that "no school in the state will be integrated while I am your governor." 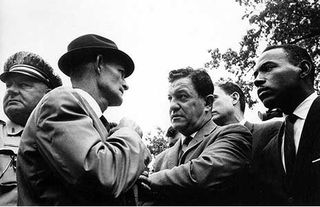 On the night of September 30, violent confrontation exploded between the 2,000 protesters and 500 federal troops sent by President Kennedy to protect Meredith and enforce the court's ruling. Two people were killed, a car was burned, and over 100 federal troops were wounded in the riot. Shots fired from the crowd injured 28, knocked out windows, and left bullet holes in the university's famous Lyceum. Federal marshals eventually brought the crowd under control, but this event, the battle of Ole Miss, shocked the nation and left indelible physical and emotional scars on the university.

The university opted to leave the bullet holes visible in the walls of the Lyceum, foreboding reminders of the violence that occurred there. On October 1, 1962, James Meredith successfully enrolled at the university, becoming the first African American to do so and marking a milestone in the civil rights movement. He would go on to graduate from the university, guarded constantly by a team of federal troops. This photograph of his graduation is in the collection of the National Museum of African American History and Culture. 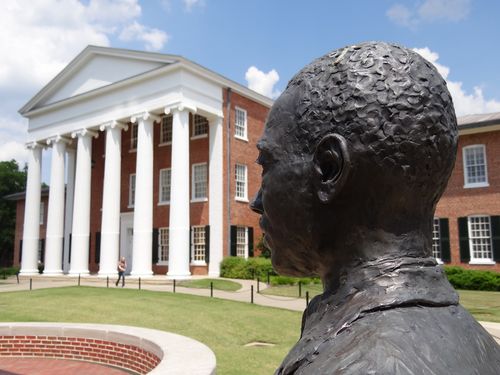 A statue of James Meredith on the campus of the University of Mississippi. Photo by Flickr user Adam Jones via the creative commons license.

The 50th anniversary of Meredith's integration fell during my senior year at Ole Miss in 2012, and the university planned a series of events and talks to discuss the lasting impact of the events of 1962, several of which I attended. The University's Sally McDonnell Barksdale Honors College hosted Attorney General Eric Holder, who spoke eloquently about the role the Department of Justice played in 1962 as well as its contemporary efforts to advance civil rights, and many of my history professors took out special time from their classes to discuss what happened and share their research on the subject.

The most moving moment for me, though, came in a speech given by chancellor Dan Jones, in which he spoke about the importance of acknowledging the events of 1962, commemorating Meredith, and not letting the tragic events that occurred on campus be forgotten in a way that made me proud to be a student and now graduate of the University of Mississippi. 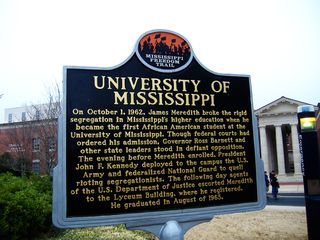 Historical marker on the university campus. Photo by Flickr user "ensign_beedrill" via the creative commons license.

Moving forward with the lessons of James Meredith and my education at Ole Miss, this fall I am continuing my education in civil rights movement history at the museum as preparation to host the National Youth Summit on Freedom Summer on February 5, 2014. The program will be an opportunity for young people nationwide to commemorate the challenges and sacrifices of civil rights movement veterans and ordinary Mississippians in the ongoing fight for social justice.

Harry Clarke is a Freedom School Scholar and a recent graduate of the University of Mississippi. Teachers, don't forget to pre-register for the National Youth Summit on Freedom Summer.