Day of the Dead at the Smithsonian: It's not Halloween

The smell of marigolds, the bright pink of fluffy tulle, and moments of quiet reflection. Curator Margaret Salazar-Porzio explores the Day of the Dead celebrations at the Smithsonian, which have brought past and present together.

Given the sweets, costumes, and spectacularly decorated dancing calacas and catarinas (male and female skeletons), many might think of Día de los Muertos (Day of the Dead) as an extension of Halloween. The tradition of ofrendas (offerings to the deceased), however, demonstrates that the Day of the Dead is deeply significant, intensely personal, and a celebration of our humanity and mortality. 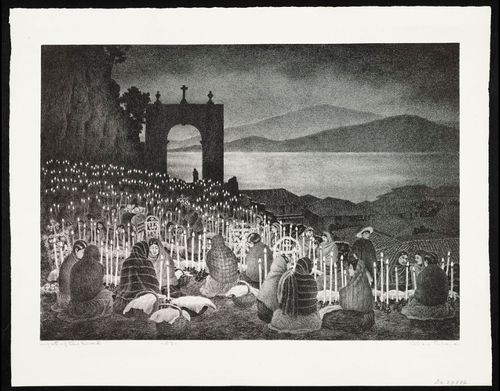 Families celebrate Día de los Muertos, or Day of the Dead, by decorating home altars and visiting the graves of loved ones. This lithograph, titled "Night of the Dead," was originally drawn in ink by Alan Crane in 1958, a Brooklyn-born illustrator best known for his landscapes and genre scenes of life in Mexico and New England.

Day of the Dead events take place on November 1st and 2nd of each year and coincide with both pre-Columbian and Catholic celebrations. Family and friends gather to honor those who have passed with ceremonies that include feasts, music, vigils, and the creation of temporary ofrenda altars. The ofrenda is a significant part of the Mexican Día de los Muertos tradition and is meant to conjure memories of people who are no longer with us as well as places and particular events gone by, powerfully bringing them into the present.

Over the years, the Smithsonian has both created and collected incredible examples of these very personal and ephemeral installations as a way to connect us to the individual and collective histories of those who have gone before us. Two examples in particular provide a window into this tradition. 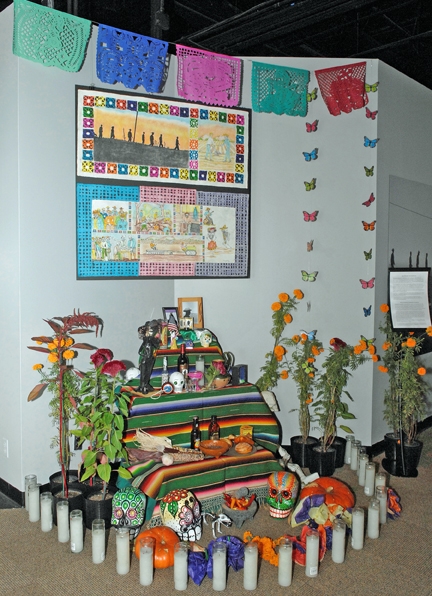 Marigolds, an important Day of the Dead symbol, flanked either side of the ofrenda, providing a colorful beacon and attractive fragrance said to draw ancestors back to earth for the annual Día de los Muertos reunion

In 2009, an ofrenda to memorialize braceros, Mexican guest workers who lived and labored in the United States from 1942-1964, was erected at the National Museum of American History in connection with the temporary exhibition, Bittersweet Harvest: The Bracero Program 1942-1964 / Cosecha Amarga Cosecha Dulce: El programa Bracero 1942-1964. At the top of the ofrenda sat images of braceros alongside both Mexican and American flags to indicate lives and loyalties that spanned two neighboring nations. Objects associated with agricultural labor as well as food and other decorative elements dedicated to the braceros were carefully placed along the three-tiered altar so that, upon closer inspection, one could remember the people and really begin to understand their experiences. 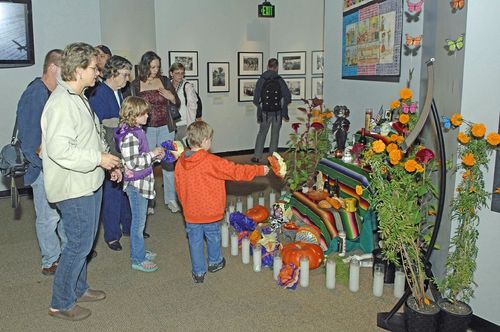 Just as memory is not something fixed and forever, ofrendas are usually temporary. The bracero ofrenda was displayed for only a few days, but artist Amalia Mesa-Bains' well-known An Ofrenda for Dolores del Rio is a work of art meant to stand the test of time. Currently on display in the new Our America: The Latino Presence in American Art exhibition at the Smithsonian American Art Museum, Mesa-Bains' altar-installation was created at a time when Chicano artists began to mine vernacular tradition as a source for their own art making. 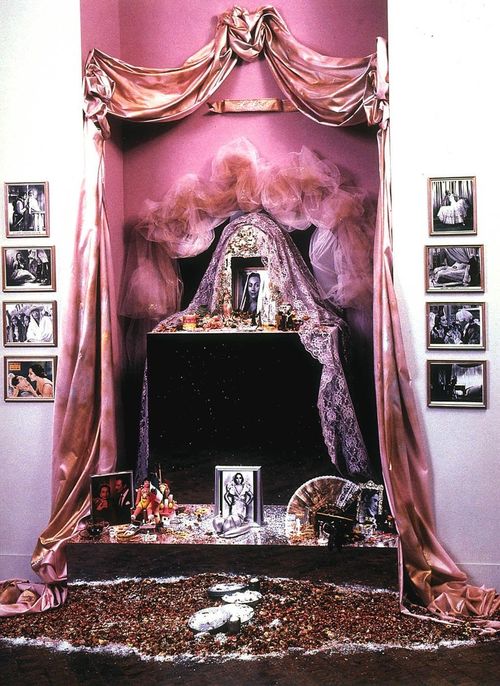 The moment you lay eyes on An Ofrenda for Dolores del Rio, you know you are looking at something both intimate and very special. The mixed-media installation transports viewers to a vintage boudoir with luxurious pink fabric, dried flowers, glitter, and tulle placed like a fluffy cotton candy halo crowning the black and white image of the Mexican actress Dolores del Rio, whose head is draped in the same manner as a Catholic saint.

Created in 1984, a year after del Rio's death, one can sense the adoration and emotion in the folds of lush fabric, images of del Rio over the years, silver fruit and opulent lace. This ofrenda is a tribute to a cultural icon whose popularity on the silver screen boomed during the time of the braceros. Dolores del Rio was a role model for many Chicanas, but her filmic presence was also meaningful to scores of moviegoers from a wide array of ethnic and socio-economic backgrounds.

In particular, her movies provided powerful imagery for the large population of Mexicans in Southern California; some were braceros who enjoyed seeing their favorite new actress in heroic roles from Ramona (1927) to The Fugitive (1947). The ofrenda is not only a memorial to the beautiful actress, but according to Tomás Ybarra-Frausto, it is also a memorial to the collective experiences of those who found empowerment in the "Mexican superstar breaking the racial taboos of mainstream Hollywood."

The individual lives and stories featured and remembered in Day of the Dead ofrendas like these bring the past into the present through carefully and critically constructed collective memories that allow us to better understand American history and human experiences.

The quote from Tomás Ybarra-Frausto is from “Sanctums of the Spirit: The Altares of Amalia Mesa-Bains,” in Grotto of the Virgins: Installation by Amalia Mesa-Bains (New York: INTAR Latin American Gallery, 1987), 9.

Dr. Margaret Salazar-Porzio is a curator of Latino History and Culture in the Home and Community Life division. Explore more images from Our America: The Latino Presence in American Art.