In the Gettysburg Address, Lincoln refers to the "brave men, living and dead, who struggled here." An image such as "A Harvest of Death" powerfully captures this struggle. Curator for the Photographic History Collection Shannon Perich explores this image and its evocative title.

President Lincoln's 10 sentences from the Gettysburg Address remain powerful. However, I find four little words attached to one of Timothy O'Sullivan's Gettysburg photographs to be equally poetic and significant: "A Harvest of Death." 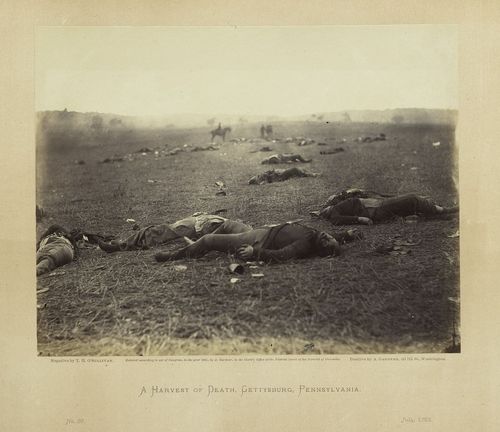 "A Harvest of Death, Gettysburg, Pennsylvania, July 1863" is plate number 36 in Gardner's Sketchbook of the War. Timothy O'Sullivan made the photograph with a wet plate collodion negative. Alexander Gardner printed the albumen photograph, titled it, and provided an accompanying text. With several other photographers, Gardner led an effort to create visually and historically significant photographs and albums. He worked with O'Sullivan in his own business.

So often photographs from the Civil War are documentary in nature, as are their titles. Many of the photographs from Alexander Gardner's Photographic Sketchbook of the War have terse titles such as "Battery No. 4, Yorktown" and "Ruins of the Arsenal, Richmond." So when he gives a photograph a title that is not simply descriptive, he is asking us to think about it beyond the data that is depicted. In fact, the text Gardner wrote to accompany "A Harvest of Death" indicates, "Such a picture conveys a useful moral: It shows the blank horror and reality of war, in opposition to its pageantry."

When I pair the title with the image, in my mind I find multiple levels of harvesting. Clearly, the bodies of the dead soldiers have been picked over, their pockets turned out, their shoes and guns removed for those who are continuing to fight. Thousands of dead and dismembered soldiers, from both sides of the war, were plucked from the fields and placed in wagons instead of the corn or wheat that should have filled the wagons. Instead of rain, blood soaked the ground, and, today, death and sadness are still rooted in the fields at Gettysburg. 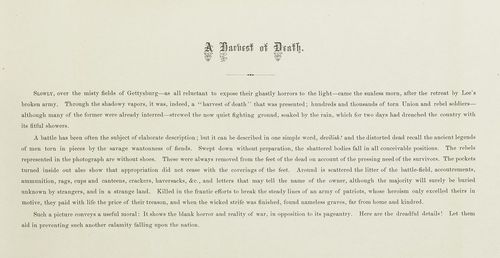 Gardner created a two volume set of photographs depicting the Civil War. He wrote accompanying text about the photographs, places, and people, as well as his thoughts about the war.

The haze of the morning has obscured the details of horses and men in the background. This painterly effect recalls many a Renaissance painting in which the space between heaven and earth, or hell and earth, are blurred. Perhaps their souls are being harvested as well by the reaper on horseback shrouded in the mist of "A Harvest of Death."

There is much excitement, or pageantry as Gardner may have put it, around the 150th of the Battle of Gettysburg, and the photographer's message seems as relevant now as ever, as he asks us to acknowledge the cost of war and offers us a cautionary message that we reap what we sow.

Shannon Perich is the curator for the Photographic History Collection. She has also blogged about other angles on Civil War photography. Learn more about the Battle of Gettysburg in this post. 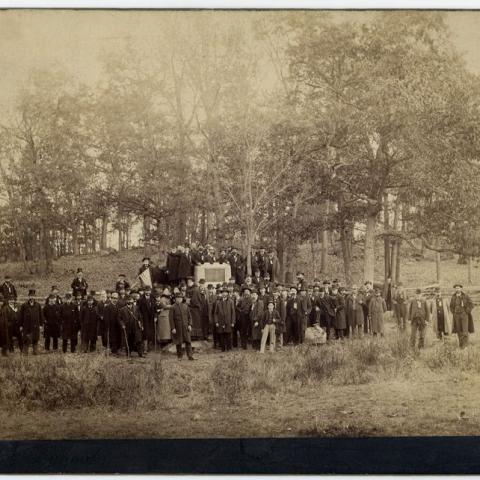 Civil War portraits: Where personal and public meet (VIDEO)
We are just at the beginning of several years of marking the 150th anniversary of the Civil War; and we’ve still got a long way to go...

Coloring Frida Kahlo
Throughout the spring, the blog has offered up a variety of topics related to freedom. We often use the term to indicate political...