A parallel journey: A grandson's tribute to a World War I hero

We usually celebrate Veterans Day with parades and speeches. Jeff Lowdermilk, a member of the Smithsonian Council for American History, celebrates his grandfather's military service in a more personal way—by tracing his footsteps during World War I, using his grandfather's wartime diary as his guide. 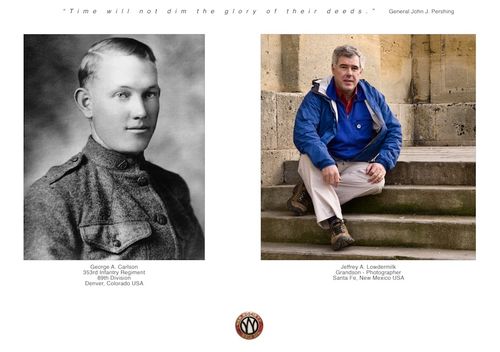 A page from Lowdermilk's book depicting both himself and his grandfather

Listening to his grandfather's stories as a child ignited Jeff's passion for history. His grandfather, George A. Carlson, would tell Jeff of his service as a "doughboy" in Europe during the Great War. When Carlson passed away in 1982, Jeff inherited his diary, which included not only lengthy descriptions of the landscapes, towns, and battles he experienced, but also observations and insights about life as a soldier.

Two decades later, Jeff read his grandfather's journal and was fascinated. He transcribed the diary and studied maps, tracing his grandfather's route through France, Belgium, Luxembourg, and into Germany. After his first pilgrimage to these sites in 2002, Jeff enrolled in photography classes to present a grander representation of the brave men who sacrificed their lives during the war.

Camera in hand, he has since returned to Europe more than ten times, following the diary in greater detail with each subsequent journey. His books, Honoring the Doughboys, Following My Grandfather's World War I Diary: A Photographic Journey, and Saluting America's World War I Heroes, integrate passages from his grandfather's diary with his own anecdotes of self-exploration and photographic surveys of the places his grandfather once stood. 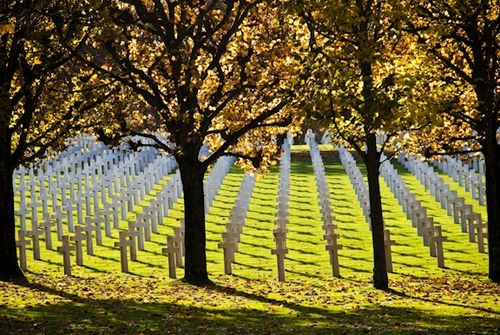 The Meuse-Argonne cemetery in France, where 15,000 American World War I soldiers are buried. Photograph by Jeff Lowdermilk.

Jeff has gained a deeper understanding of Veterans Day through his parallel journey to that of his grandfather. As a grandson, he is reminded of the importance of tracing one's family history, and that there are stories of sacrifice and bravery in every lineage. As a nation, we are reminded that we can only move forward when we understand where we come from. The National Museum of American History is proud to salute the veterans who play an important role in our nation's history, and those like Jeff Lowdermilk who keep their stories alive.

Jeff's passion for history inspired him to join the Smithsonian Council for American History, which provides essential funding to the museum to preserve its national treasures. Learn more about the Council and how you can be part of this national group of history enthusiasts, or contact Lauren Collette, Individual Giving Associate, at ColletteL@si.edu. Discover more World War I history in our collection of art from the war.