Smithsonian Latino Center Fellow Jessica Lott's dissertation research led her to our medicine and science collections, where she explored the historical roots of contemporary challenges faced by Latinos in America. Jessica's research lays the groundwork for future collecting efforts to build collections in areas that are underrepresented.

In 1975, a group of working-class Mexican-origin women filed a class action suit against the California hospital where they had been coerced into tubal ligations. (Tubal ligation is also known as having one's "tubes tied"; that is, it is a surgical sterilization procedure.) The women in the case, Madrigal v. Quilligan, had all undergone cesarean deliveries. One of the women, Helena Orozco, stated: "[A] doctor said that if I did not consent to the tubal ligation that the doctor repairing my hernia would use an inferior type of stitching material which would break the next time I became pregnant, but that if I consented to the tubal ligation that the stitches would hold as proper string would be used. No one ever explained what a tubal ligation operation was, I thought it was reversible."

The plaintiffs lost their case but its importance still resonates. Earlier this year, for example, the Center for Investigative Reporting uncovered that from 2006-2010, at least 148 female inmates in a California prison were coerced into sterilization procedures. New York State also has a record of forced and coercive sterilizations of Latinos/as. 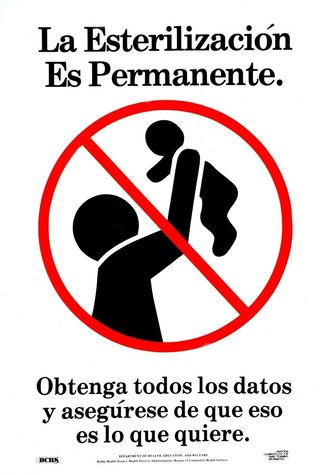 People of Latin American origin in the United States (in particular from Mexico and Puerto Rico) have been frequent targets of eugenicists, who believed them to be "polluting" the white American race. For Mexican-origin individuals, this meant that they were subject to rigorous inspection and disinfection procedures at the border. It also meant that their childbearing was devalued and discouraged. Latinos/as were the targets of coercive and forced sterilization through the 1970s in California. People with disabilities were another group that eugenicists felt were of "poor stock." Consequently, Latinos who found themselves in any sort of institution could be given culturally exclusionary IQ tests; their poor scores further justified sterilization.

As I immersed myself in researching disability and Latinos/as, with the guidance of curators in the museum's Division of Medicine and Science, I began to see how it would inform my own dissertation research. History is important to my research as a cultural anthropologist. A question I always ask is: how do historical processes shape what I am seeing in a contemporary setting? Institutions, social organization, cultural values, and beliefs don't just sprout up overnight, after all.

My dissertation work is primarily ethnographic research about reproductive decision-making among Latino couples in the United States. In particular, I am interested in the process of how couples are choosing not to have children ("childfree"). My hunch is that the history of racism, eugenics, and forced sterilization influences how Latinos/as understand and experience reproductive choice, birth control, and what it means to have children. 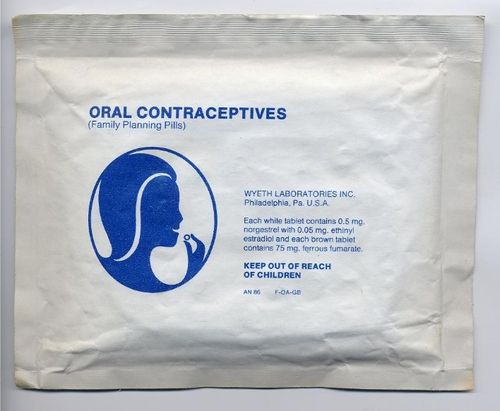 Anthropologists have already studied how Latinos/as make decisions about prenatal screening for fetal disabilities. A body of research suggests that Latinas and their partners face unique challenges. Clinicians' efforts at "cultural competency," which ideally helps clinicians interact with diverse clientele in a culturally sensitive way, may result in stereotyping Latina patients, thus negatively affecting their care.

For example, clinicians sometimes believe that Latinas have a fatalistic world view because they hold strong Catholic religious beliefs. In reality, many Latinas are not Catholic, and those who are have varying interpretations of their faith. As a result of a stereotype, clinicians sometimes omit information from prenatal testing consultations, so the patient may not have all the information she needs to make decisions about her health. Further, working through translators, whose style of translation varies, may affect a person's decision-making process and outcome. And, for some Latinos/as, a lack of understanding of biomedical models causes miscommunication.

I think that these contemporary challenges are best understood in historical context. The unfortunate history of reproductive coercion and prejudice undermines relationships in the clinic today. For example, in 1986, California was the first state with an initiative to require that pregnant mothers be offered the MSAFP (Maternal Serum Alpha-Fetoprotein Screening, a test that determines if further maternal screening, such as amniocentesis, is necessary). Research has shown that women offered prenatal screenings, such as the MSAFP, feel pressured to submit to the screening, despite it being voluntary. 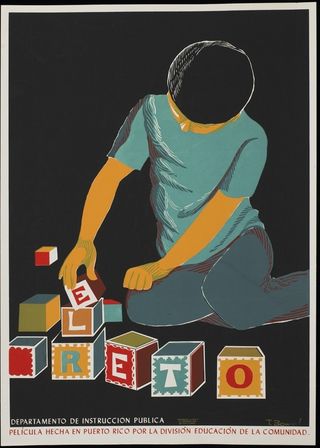 "The Challenge" promotes a film about a boy with a mental handicap. Films like this were conceived as teaching tools to inform parents about issues that they faced when confronted with the health and the well-being of their children and of their right to social services. Puerto Rico Division of Education Poster Collection, Archives Center, National Museum of American History.

Moreover, as much as prenatal screening is about reproductive decision-making, it is also about how people understand disability. Some present day research suggests that having a child with a disability has motivated some Latinos to migrate to the United States, where it is perceived that the child will have better medical care. Other research suggests that for Latino parents of children with disabilities, structural barriers have historically prevented them from accessing care for their children, not cultural perceptions ("folk models") of disability.

The stigma of disability, historical and on-going, has played another role, as well. Some recent Latino immigrants, wishing to "fit in" in the United States, have expressed concerns that having a child with a disability may make it difficult to do so. These contemporary barriers and stigmas also link the history of eugenics in the United States, as prejudices against people with disabilities reinforced "racial" prejudices.

Jessica Lott is a Smithsonian Latino Center Fellow and a PhD candidate in Cultural Anthropology as well as a candidate for a Graduate Certificate in Women's and Gender Studies at Southern Methodist University. Her dissertation research focuses on Latino couples' negotiations of reproductive decision-making in Dallas, Texas. Citation for the quotation in the opening paragrph of this blog post: Enoch, J. (2005). Survival Stories: Feminist Historiographic Approaches to Chicana Rhetorics of Sterilization Abuse. Rhetoric Society Quarterly 35(3), 5-30.