An American take on the world of Downton Abbey

Are you one of Downton Abbey's many American fans? With the new fourth season airing here in the U.S. on PBS starting this Sunday, January 5, intern Leanne Elston found some objects from the museum's collections that give us an insight into the world of Downton Abbey—from this side of the pond. 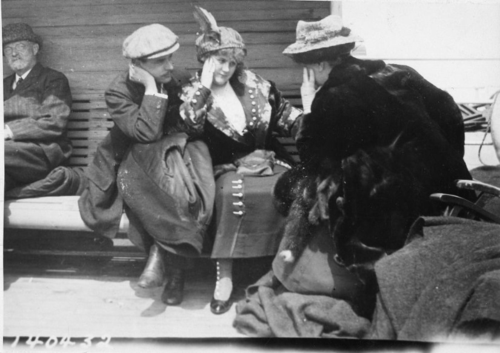 Canadian teenager Bernice Palmer snapped this photo of Titanic survivors on her Kodak Brownie box camera. The picture identifies the young facing couple as honeymooners Mr. and Mrs. George A. Harder of Brooklyn, New York. The woman with her back to the camera is Mrs. Charles M. Hayes, whose husband was president of the Grand Trunk Railway and who died in the shipwreck. The first season of Downton Abbey begins with the news of the Titanic's sinking and the death of the family's heir in the wreck.

During my internship, I've had the opportunity to explore some of the museum's collections behind-the-scenes. I've seen Jim Henson puppets, creepy cane handles, and mustachioed money, and for this blog post, I went into a storeroom to search for dishware. It might sound less exciting than wreaths made of human hair, but rummaging (very gently!) through cases of dishware to find something from the post-Edwardian era was its own kind of adventure.

In the end, Bonnie Campbell Lilienfeld, deputy chair and curator in the Division of Home and Community Life, found a set of objects with a wonderful story for me. Those objects, and others in the museum's collections, offer an indication of life at a certain time. Even though Downton Abbey takes place in England, many of the historical events that mark the show had significant influence on America at that time, too. We can bridge the gap between the English and the American—after all, Cora Crawley, the Countess of Grantham, is an American who married an English aristocrat. Just as television delivers fictional stories to us, objects carry real stories and real memories.

The type of telephone seen on the left is called a candlestick telephone, common in the 1910s and 1920s. Interestingly, this model has a dial, although many phones in this era were not designed for the user to make the call. One picked up the receiver and was automatically connected to an operator. On the right, Lady Rose (Lily James) uses the house's telephone. Photo courtesy Carnival Films and PBS Masterpiece.

Bonnie tells me that one of the reasons she loves Downton Abbey is the time period it captures. "It's recent enough that people know something about it," she notes. "And they're really in this transitional moment—that's what grabs me." The show often makes a point of highlighting new developments, whether it's the Dowager Countess' bafflement at a swivel chair or Daisy the kitchen maid's fear of electricity. Carson the butler expresses obvious distaste when a telephone is installed in the house, though he seems to come around eventually, as most of us usually do.

All of these moments offer humor while still capturing the transition, both personal and historical, of the time. We can compare this to today: How many people were wary to embrace cell phones? How many decry the use of social media? But museums now are collecting objects that illustrate our rapidly changing technology and shifting ideas—in addition to telephones like the one above, we have early computers and portable cassette players. 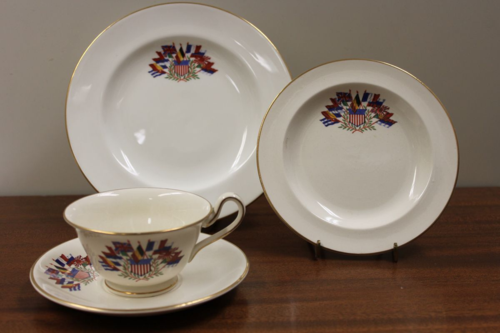 Tea sets like this one were made by the Wedgwood Company of Staffordshire, England, starting in about 1917. Mrs. Robert Coleman Taylor got the idea to commission a tea service from Wedgwood when the U.S. entered World War I.

The second season of Downton Abbey is set during the Great War, a conflict which the United States entered reluctantly but helped end quickly. The characters of Downton Abbey, while fictional, illuminate the very real experiences of those involved in the war. The china that Bonnie found for me while searching through the museum's dishware collection offers an appropriate connection between England and America at this time. Called "Liberty China," tea services like the one above were made by the English Wedgwood Company but sold in the United States to benefit various war charities run by the allies. The china's pattern features the flags of the allied nations superimposed on the American shield. 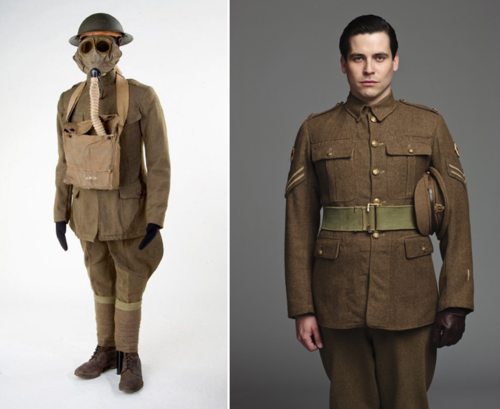 On the left, an American enlisted soldier's "doughboy" uniform from World War I, nicknamed for its brown, doughy color. On the right is footman Thomas Barrow (Rob James-Collier), who in season two enlisted in the Royal Army Medical Corps. Photo courtesy Carnival Films and PBS Masterpiece.

When Lady Sybil decides to train as a nurse to contribute to the war effort, she's introduced to a whole new world; she trades in her nice clothes and attentive servants for a plain nurse's uniform and wounded soldiers to care for. Katherine Ott, a curator in the Division of Medicine and Science, told me, "Nurses have always been the heart and soul of medical treatment—with both the figurative and literal keys to the kingdom." Small necessities like thermometers were often pinned or clipped to their clothing with chains called chatelaines. We can imagine that Lady Sybil—or Nurse Crawley, to her colleagues—might have had use for such a chatelaine.

Nurses at the turn of the 20th century used chatelaines such as the one on the left featuring an art nouveau design to carry spectacles. Perhaps Isobel Crawley, who worked as a nurse during Boer War, might have used a similar one? On the right is Sybil Crawley (Jessica Brown Findlay). Photo courtesy Carnival Films and PBS Masterpiece.

The abbey of Downton Abbey, the large house around which our characters' lives revolve, serves as a constant throughout the show and the passage of time. But while the house itself hardly changes, the clothing undergoes obvious transition, from the first season's early 1910s to the upcoming fourth season's 1920s. Hemlines rose and silhouettes changed as women in particular explored evolving trends. Lady Edith, who in seasons one and two was usually the least stylish of the three Crawley sisters, came into her own in season three, embracing new styles and often personifying what we think of as 1920s fashion. 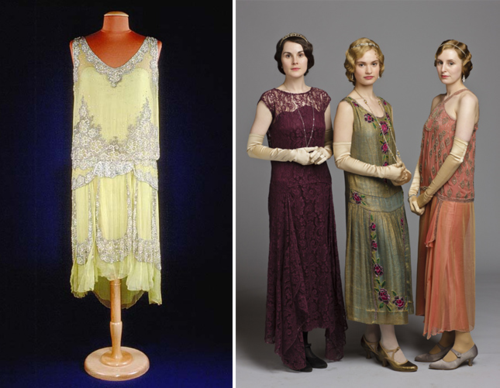 The 1920s flapper dress on the left typifies the fashion of the period. It features a dropped waistline seam, and its bodice is overlaid completely with beaded chartreuse chiffon. Seen on the right is Mary Crawley (Michelle Dockery), Rose MacClare (Lily James), and Edith Crawley (Laura Carmichael) in similar dresses in season four. Photo courtesy Carnival Films and PBS Masterpiece.

Many of us who watch and love Downton Abbey get swept up in the drama and aristocratic fantasy of it, but we can draw parallels between England and America in the early 20th century. Objects tell us of the shared experiences of people on both sides of the pond. When you sit down to watch season four, remember that in many ways, the history of Downton Abbey is our history, too.

Leanne Elston is an intern in the New Media Department at the National Museum of American History. She is also the co-host of Downtown Abbey, a podcast about Downton Abbey.

Posted in From the Collections, Intern Perspectives, Film & Television, World War I