Benjamin Franklin and his silver teapot

"A Silver Teapot Must Have A Wooden Handle." Benjamin Franklin shared this observation with Cadwallader Colden, in December 1753, thus initiating a scientific investigation of a fact well known to silversmiths who made teapots of this sort, to wealthy women who poured tea from them, and to house maids who filled them with hot water. Colden responded with delight: "Your notion of some things conducting heat or cold better than others pleases me and I wish you would pursue the scent." 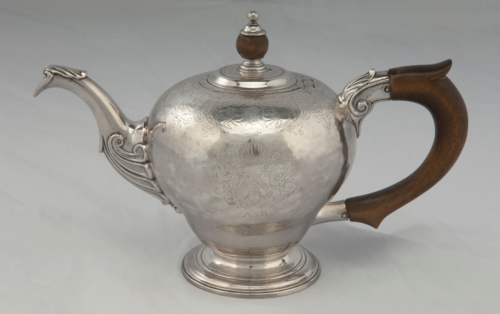 This silver teapot with a wooden handle was made around 1750 by Samuel Casey of Little Rest (later Kingston, Rhode Island) for Abigail Robinson. It was probably made around the time of Abigail's marriage to John Wanton of Newport, Rhode Island, in 1752. Domestic Life collections.

We do not know when Franklin first encountered silver teapots, but we do know that his interest in thermal conductivity meshed with his broader interest in heat. When he went to London in 1724, he carried a small purse made of asbestos, a substance that, since antiquity, was known for its heat resistant properties. This purse was bought by Hans Sloan, and is now in the British Museum. A few years later, Franklin urged Joseph Breintnal, an original member of the Philadelphia Junto, to look into the effect of heat on cloth of different colors. The idea was to put bits of cloth onto a field of snow, and assume that the patch that sank the deepest had absorbed the most sunlight. In the early 1740s, Franklin unveiled his new energy-efficient stove.

Overwhelmed with political and social responsibilities, Franklin never found time to perform any thermal conductivity experiments—but he did imagine how they might be done. One method involved holding a dollar coin in one hand and a piece of wood in the other, putting both into a flame, and noticing which one heated first. Another method involved pouring hot lead into the middle of a hollow square with three sides of wood and one of metal, and seeing which side which cooled first.

Living in Paris in early 1780, Franklin showed a new scheme to Jan Ingenhousz, a Dutch man of science. This involved a box with seven holes in one side, and seven wires, each of a different material. The idea was to cover each wire with wax, insert one wire into each hole, pour hot water into the box, and note how rapidly the wax melted on each wire. Franklin's official duties prevented him from pursuing this problem, but Ingenhousz was able to use it to good advantage. He described the results in his Expériences et Observations sur Divers Objets de Physique (Paris, 1785)—in English, Experiments and Observations on Various Subjects in Physics. 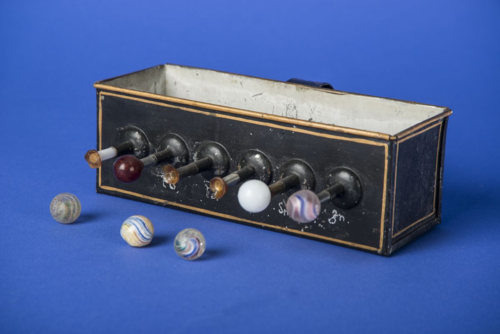 Deborah Jean Warner is a curator in the Division of Medicine and Science.