Casting Scarlett: Reflecting on "Gone With the Wind"

Today is the 75th anniversary of the announcement that Vivien Leigh would play Scarlett O'Hara in Gone With the Wind. Guest blogger Rachel L. Martin, assistant director of the Center for Historic Preservation at Middle Tennessee State University, reflects on the decision to cast Leigh and the film's complicated legacy. 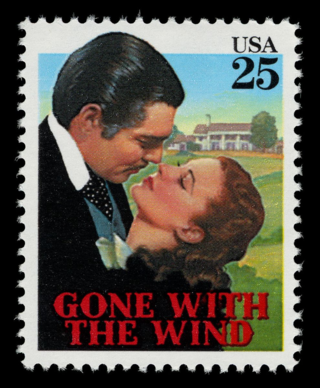 A stamp from 1990 commemorating the classic film. The stamp is in the collection of the National Postal Museum.

Kristen moved into my neighborhood in the third grade. She was kind, smart, and fun, but that's not why we first hung out. In the beginning, I used her for her hoop skirt. Her timing couldn't have been better. I had just discovered the 19th century. Within a few weeks, we were best friends.

In her three-tiered, cotton-covered masterpiece, we were Meg March, succumbing to vanity at Belle Moffat's ball. We were Lady Rowena, waiting for our Ivanhoe (historical accuracy be damned! Kristen owned a hoop skirt!). We were Jane Eyre, pledging our love to Mr. Rochester even as we left him. But most frequently, we were Scarlett O'Hara, enticing dashing men with a glimpse of ankle and mimicking Vivien Leigh's accent and affectations. 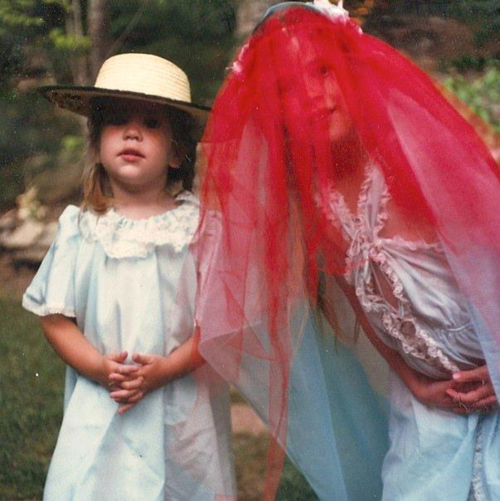 The author and her sister playing dress-up

We abandoned dress-up a few years later. By graduate school, I deconstructed Gone With the Wind's moonlit magnolias with only a twinge of nostalgic regret. But, if I'm honest, I still wish I was as glamorous and enchanting as Leigh's Scarlett, haughty and desperate in a dress cut from her mother's drapes.

Leigh became Scarlett 75 years ago. Before casting her in the role, producer David O. Selznick's team interviewed close to 1,400 women and screen-tested 31 of them. Convinced he could find a better Scarlett, Selznick began filming his epic without casting the role.

He and George Cukor—the film's first director who Selznick fired over creative differences—met Leigh on December 10, 1938, while shooting the Burning of Atlanta. In 1973, Cukor told The Atlantic that he knew immediately Leigh was perfect for the role: she was "charged with electricity" and "possessed of the devil." She learned she had won the role on Christmas Day. Selznick made the official announcement on January 13, 1939.

It's only recently struck me what an outrageous choice Leigh was for the role. Not only was she not a Southerner, she wasn't even an American.

Many in Hollywood were put off by Leigh's British-ness. "Mr. Selznick was two years deciding on his Scarlett," sniped gossip columnist Hedda Hopper. "And out of millions of American women couldn't find one to suit him." She predicted that Americans would stay home in protest.

But Leigh threw herself into the role, perfecting a speech cadence which passed as Southern and captured Scarlett's wit and sass. When the movie debuted in December 1939, it became the highest-earning film to that point.

While Leigh's Scarlett was part of the movie's success, its release was also well-timed. It embodied the struggles of mid-20th century America.

First, the movie portrayed white supremacy in a way that made middle-class whites comfortable. Much of the audience rejected the mob violence depicted in earlier movies such as D.W. Griffith’s Birth of a Nation, which had contributed to the revival of the Ku Klux Klan and justified lynchings and racial massacres. 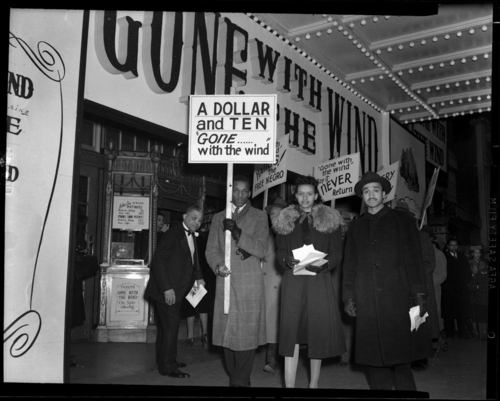 In this photo, protesters at a Washington, D.C., theater where the movie was playing. Scurlock Studio Records, ca. 1905-1994, Archives Center, National Museum of American History.

By 1939, many whites believed they practiced a "gentler" racism, though the violent suppression of the Civil Rights Movement would belie this claim. They wanted to place a veneer of gentility over the systemic disfranchisement of the nation's minorities. They preferred to think they were like the men who defended Scarlett's honor by descending upon Shantytown; they punished specific individuals rather than massacring entire communities. The movie showed African Americans as needing white leadership and protection, and it perpetuated lies about Reconstruction that persist to this day.

Gone with the Wind also addressed the social upheaval of the Great Depression. A concept prominent in the book (and muted but still present in the movie) is that moments of crisis are good for society. Or, as Rhett tells Scarlett of Ashley Wilkes, "This isn't the first time the world's been upside down and it won't be the last.

… And when it does happen, everyone loses everything and everyone is equal. And they all start again at taw, with nothing at all. That is, nothing except the cunning of their brains and the strength of their hands. But some people, like Ashley, have neither cunning nor strength or, having them, scruple to use them. And so they go under and they should go under. It's a natural law and the world is better off without them. … Most of them … [will] wonder all their lives where the lost enchantment has vanished. They'll simply suffer in proud and incompetent silence. But he understands. He knows he's winnowed out."

Gone with the Wind is Ayn Rand repackaged on a plantation, and it is a direct rebuttal of the New Deal programs.

Finally, Gone with the Wind is a feminist story. Scarlett is stronger than the men around her. Her suitors dance attendance upon her whims. She keeps her family alive and fed when her father goes insane. She seduces, intimidates, and feeds Ashley Wilkes and his family. The only man who bests her is Rhett Butler, and his refusal to submit to her drives their tumultuous romance. It culminates in him sweeping her up the red-carpeted stairs for a rape scene (or, at best, a moment of dubious consent) which leaves Scarlett trilling happily while worrying that she was "used … brutally", an eroticization of forced sex which troubles many women.

All these factors combine to make Gone with the Wind and Leigh's Scarlett a fixture in American culture for the last 75 years. It keeps reappearing in our conversations and media: Carol Burnett famously spoofed the movie, abetted by a brilliant Bob Mackie gown; Claire and Rudy Huxtable of The Cosby Show watched the epic to commemorate Rudy's first menstrual period; in The Wind Done Gone, Alice Randall retold the story from the point of view of a slave woman who is the child of Scarlett's father and her mammy. In each of these iterations and the many others like them, we continue to debate the cultural meaning and political concepts encapsulated in the epic story. 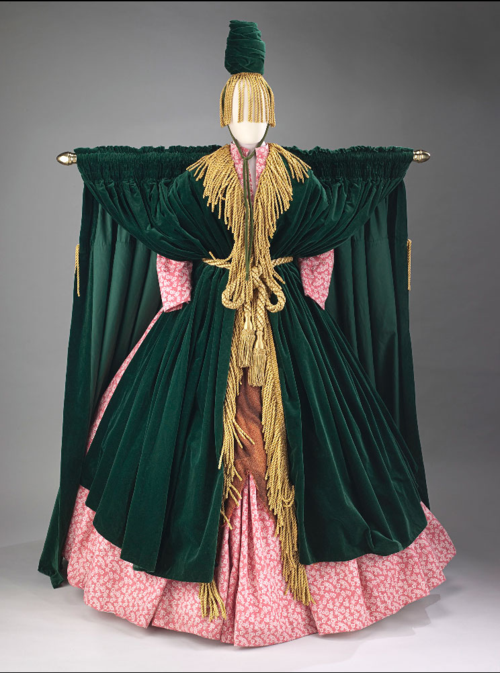 Costume designed by Bob Mackie for Carol Burnett, who wore it during a skit on her comedy variety TV show. A spoof on Gone with the Wind, the skit was called "Went with the Wind" and the character's name was Miss Starlett.

And just the other day, my niece asked me, "Wouldn't it be wonderful if my skirt could stick out like this?," twirling to make it look like she had a hoop underneath.