How You Doin', Smithsonian? Collecting talk show history with The Wendy Williams Show

Ever wonder how the museum acquires all of its fantastic pop-culture memorabilia? Guest blogger Wendy Williams of The Wendy Williams Show gives you a rare look into the museum's first collection of items from a daytime talk show host. 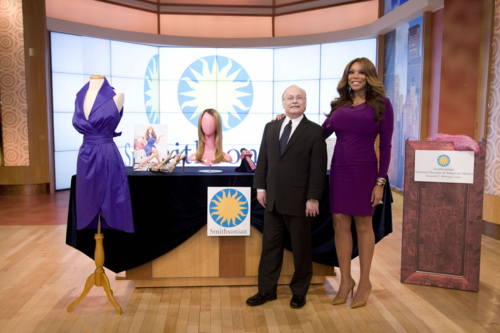 Wendy Williams and curator Dwight Blocker Bowers with the items Wendy is donating to the National Museum of American History. Courtesy "The Wendy Williams Show".

When I asked Dwight Blocker Bowers, the museum's Curator of the Entertainment Collection, why he was interested in collecting items from my show he responded: "The Smithsonian serves as the nation's memory. We chose you because you’ve taken TV and celebrity into a new direction. You're a bold media figure and we're excited to have your personal items donated to our national collection; joining icons in American history, such as Dorothy's ruby slippers from The Wizard of Oz and the original Star-Spangled Banner."

When I heard this, I was immensely flattered. So I got to thinking about what I'd like to donate. The objects had to be personal, iconic, and fabulous! So after thinking it over, these are the items I decided to donate:

The purple Tadashi dress was what I wore on my very first photographic shoot to promote "The Wendy Williams Show." We filmed a six-week sneak peek in summer of 2008, but it wasn't until July 13, 2009 that the show officially launched. This shoot was done in April 2009. When I was on the radio, there was no need to get dressed up; however, having my own talk show was a dream come true, so I was very conscious of looking the part from the outset. I personally own a number of Tadashi dresses and the color on this just popped, especially when I sat down on the white set for this shoot. That's what I wanted for my show! 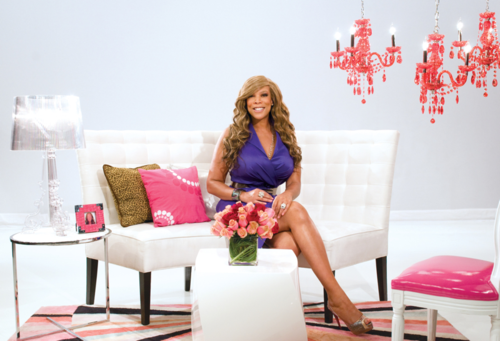 The heels were the very first pair of Christian Louboutins that "The Wendy Williams Show" purchased for me. I wore them in the same April 2009 photo shoot as the purple Tadashi dress. These are a rare and beautiful make with collaged scraps of paper and fabric preserved in plastic. They appeal to my crafting nature. At six inches, they also show how my on-air style has evolved from tottering around in higher heels, to the four-inch heels I now wear with confidence. 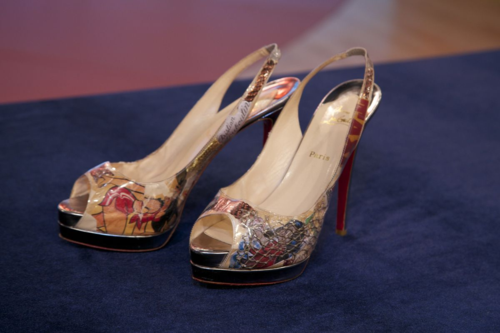 I call I'm donating the "Twombré". It's named partly after my "wigologist", Antwon Jackson, who does an amazing job on all the wigs I wear on TV. Originally the wig was entirely brunette, but Antwon dyed it blonde, leaving darker roots, to give it a bit of "How You Doin'?" sass. You’ll also note the root realness, meaning the center part is thin enough to show my scalp so it doesn't look like I'm wearing a wig at all. I wear this on the show all the time and I love it dearly. 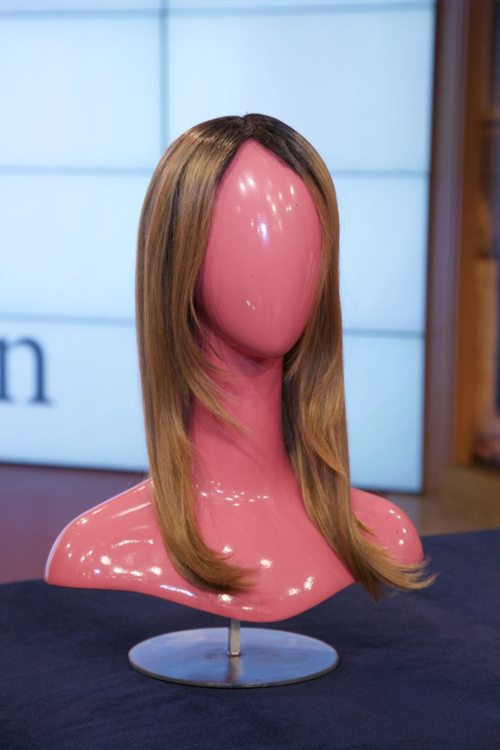 Pink is one of my favorite colors and the wig head I'm donating has been with me since the six week sneak-peek we filmed in 2008. I have seven of these in my dressing room that I keep my wigs on when Antwon isn’t working on them. Generally speaking, wig heads come with shorter or longer necks for different length wigs, so I have a mix for my shoulder-length styles and the longer 22-inch tresses that I love. 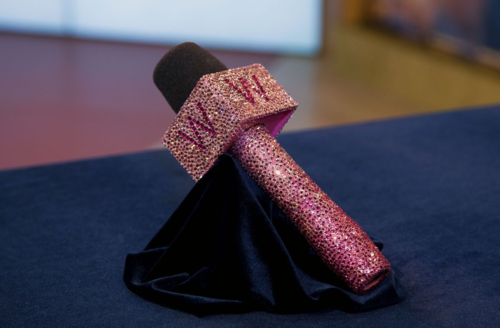 The production company Debmar-Mercury came to me in 2008 and said they wanted to transfer my successful radio show to the small screen. One of the key segments they wanted was "Ask Wendy," where callers (and now viewers) ask me questions about the life and relationship dramas they are facing. Having given thousands of answers based on common sense, proper etiquette, and knowing when protocol needs to be broken, this mic has been with the show since its inception and has been used to interview hundreds of ordinary people with extraordinary stories. But because it's me, the show had it blinged-out to reflect my personality. It's my favorite color: pink! 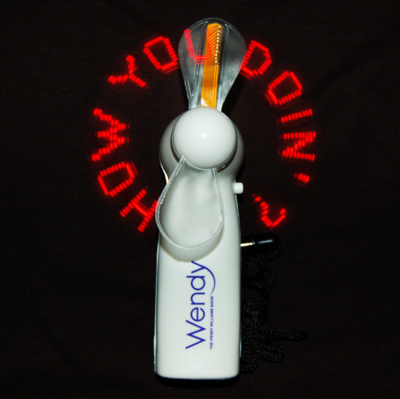 The Diva Fan debuted on the show on August 7, 2009, in my Hot Topics segment. It's a portable version of the fans singers like Beyoncé and J-Lo use on stage to achieve that diva effect. It's a battery-operated, customized fan with red LED lights that says my catchphrase, "How You Doin'?" when turned on. I created "How You Doin'?" during my radio days and it really caught on. People say it to me everywhere I go and it never fails to put a smile on my face! This was the 20th show of my first season and has been used ever since to reward audience members and home viewers for their participation in the show. 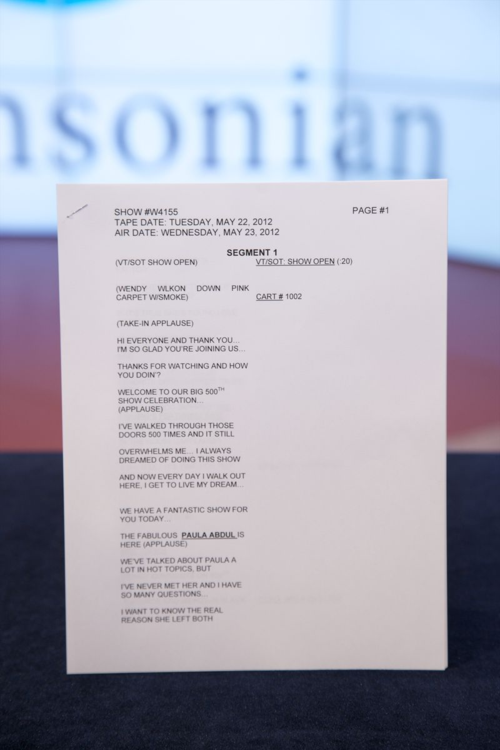 I'm also donating the script from my 500th episode, which aired in May 2012. When my show was first picked up in 2008, I was ecstatic. It was a dream come true. By the time, in season three, when our 500th episode rolled around on Wednesday May 23, 2012, it was time to really celebrate our success. Not only were audiences in America sitting up and taking notice, I had developed an international following with the show airing in 52 countries. It made me so proud to host this messy little talk show that had not only survived the cutthroat world of daytime television, but was actually thriving. We wanted to blow it out and put on a really memorable show. Our special guest was Paula Abdul, who I'd talked about a lot in "Hot Topics" but had never met in real life. We also had musical guests The Trammps perform my favorite disco theme, "Disco Inferno," from Saturday Night Fever.

See the video clip of the donation here.

This donation is part of an ongoing effort to collect from daytime television, an initiative that was kicked off in May 2012 when the museum announced a three year partnership with the National Academy of Television Arts and Sciences. An exhibition exploring American culture is currently in development and will draw on the museum's television, theater, music, sports, and entertainment collections. The exhibition is scheduled to open in 2017.

When history meets pop culture: The Jonas Brothers visit the museum
The White House Correspondents Dinner brought quite a number of celebrities to Washington this month. One of the museum’s board members was...

Fright wigs and slapsticks and Tonys . . . oh my!
What do Grandmaster Flash, Phyllis Diller, and Oscar the Grouch have in common? Their pop culture legacies are all featured in the museum's...