The statesman and the chemist: Thomas Jefferson and Joseph Priestley

Theologian and chemist Joseph Priestley immigrated to the United States in 1794 after a mob destroyed his house and laboratory in Birmingham, England. On the 210th anniversary of his death, curator Deborah Warner shares the story of the relationship between Priestley and one of America's Founding Fathers, Thomas Jefferson. 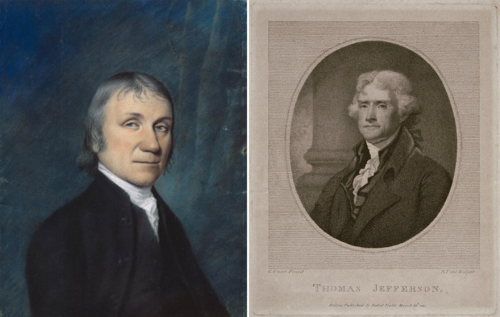 Joseph Priestley was, in many ways, the most accomplished immigrant to the United States in the late 18th century, and he was warmly welcomed by those who hoped to use his achievements to support their agendas. Announcing his arrival in New York in June 1794, liberal newspapers rejoiced that "the land of freedom and independence" had become the asylum of great characters "who have been persecuted in Europe merely because they have defended the rights of enslaved nations." The American Philosophical Society was pleased that Priestley's "talents and virtues" had been "transferred to this Republic."

In the same vein, Thomas Jefferson opined that Priestley's "antagonists think they have quenched his opinions by sending him to America, just as the Pope imagined when he shut up Galileo in prison that he had compelled the world to stand still." And when he heard about Priestley's ill health, Jefferson wrote to say: "Yours is one of the few lives precious to mankind, & for the continuance of which every thinking man is solicitous. Bigots may be an exception." 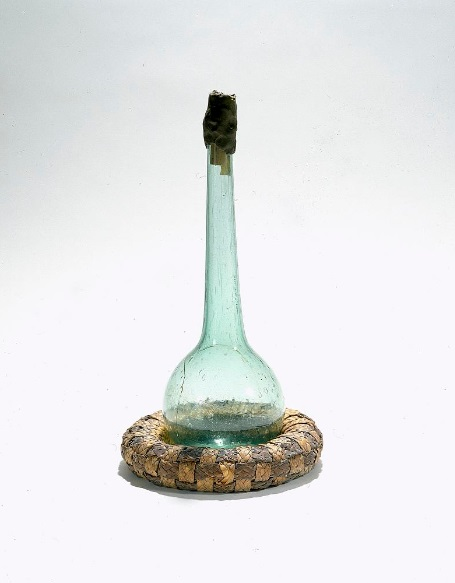 A noted chemist, Priestley used this flask, called a "matrass," in his Northumberland, Pennsylvania, laboratory. A matrass, part of a distillation apparatus, is a vessel with a round bottom and a long slender neck. It is used with a head and a receiver, the two other pieces needed for the distillation process.

Jefferson surely knew about Priestley's major scientific achievements: important texts on electricity and optics; the development of carbonated water (this led to the prestigious Copley Medal from the Royal Society of London); and the isolation of seven gases, the most notable being oxygen. He was also keenly interested in Priestley's views on religion, which included a criticism of priests, an enthusiasm for Unitarianism, and a belief in Jesus as a moral leader whose teachings were compatible with natural law. 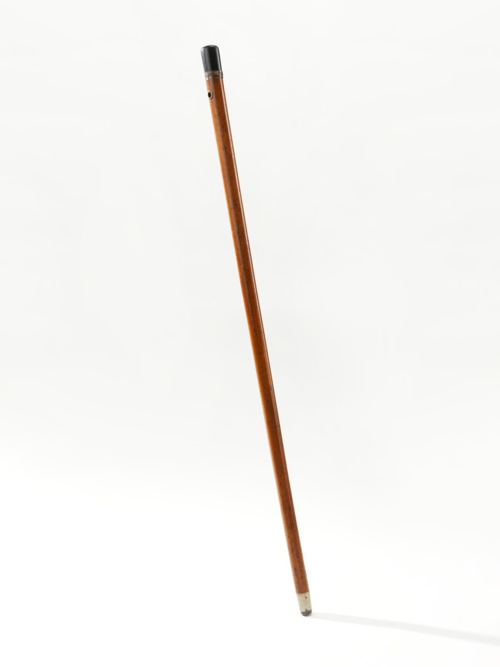 Middling and upper middling men around 1800 often used walking sticks to maintain balance, express style or authority, and keep stray dogs at bay. The material of this modest example, like Priestley himself, traveled the globe before landing in Northumberland, Pennsylvania. The handle is ebony, a strong yet inexpensive wood from Asia or Africa that provided a smooth and polished finish. The shaft is made from the stem of a rattan palm from East Asia—the word "Malacca" referring to the Malay Peninsula. The ferrule is a form of German silver, an alloy of copper, nickel and zinc that look like a more expensive metal.

One modest object in the museum's collections represents the relationship between Jefferson and Priestley. This is a wooden cane that an American chemist named Henry Carrington Bolton deposited at the Smithsonian in 1888, along with a note indicating that Thomas Jefferson had given the cane to Priestley. We have found no mention of this gift in any Priestley or Jefferson correspondence. But we do know that Priestley "commonly walked with a long cane in his right hand, and was a most excellent pedestrian." We know that canes were common gifts in the Atlantic world of the period. We also know that a similar wooden cane is in the Priestley house in Northumberland, Pennsylvania, and that Priestley scorned the "gold-headed canes" that represented the "vulgar ostentation of the rich Quakers" in Philadelphia.

Jefferson also valued Priestley's ideas about education, and he often sought Priestley's advice as he developed his own plans for primary schools and for the University of Virginia. Priestley, in return, dedicated his "General History of the Christian Church" (1802-1803) to Jefferson, then serving as President of the United States, "with a deserved encomium on the merit of that great man, and expressing the Author's satisfaction in spending the last years of his life under his just and equal administration."

Deborah Warner is a curator in the Division of Medicine and Science. She has previously blogged about a lesser-known Benjamin Franklin invention. Thanks to curator Nancy Davis for providing additional information about the cane.