Can you imagine not knowing Babe Ruth? What if Muhammad Ali and his accomplishments had been lost to history? What if you didn't know who the speedy Major Taylor was? It's a good bet that that last man's name left you thinking, "Who?" Intern Noelle Alvey goes into the sports memorabilia collection to look at this forgotten cycling champion.

Forty years before Jesse Owens earned gold at the Berlin Olympics, and fifty years before Jackie Robinson stepped up to bat for the Brooklyn Dodgers, African American cyclist Marshall "Major" Taylor smashed the racial barrier in professional cycling. Taylor broke through the color lines of bicycle racing to become the world's first black cycling champion, and the first African American world champion of any sport, yet despite his incredible accomplishments few know his amazing story. 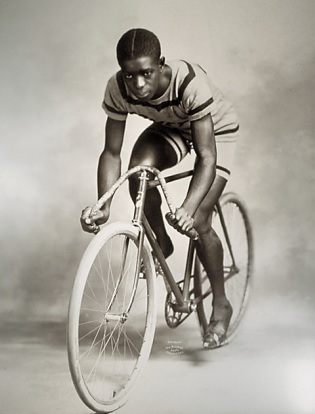 Marshall "Major" Taylor overcame racial discrimination to become one of the world's fastest cyclists, holding multiple championship titles and world records during his career, yet few today know his name.

Taylor was born outside of Indianapolis, Indiana in 1878, 13 years after the Civil War ended, the same year bicycles were manufactured in the U.S. for the first time. As a child, Taylor would often accompany his father to work, assisting him in the coach house of a wealthy family. While there, Taylor became fast friends with the family's son, eventually becoming employed as the boy's companion. During this time Taylor was provided with clothing, private tutoring, and his first bicycle.

Taylor's life changed drastically in 1892 when when the family moved to Chicago, reluctantly honoring Taylor's mother's request to leave him behind, effectively taking Taylor from what he called "the happy life of a millionaire kid to that of a common errand boy." To help support his family, Taylor began working for a bicycle shop, where he would attract customers by performing stunts in an army uniform. It was here that Taylor earned the nickname that would follow him the rest of his career: "Major." 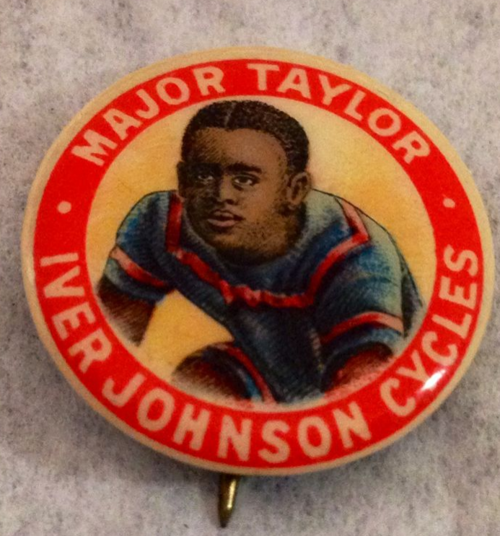 Iver Johnson Arms and Cycle Works sponsored Taylor during his 1900 season and while he toured overseas. They used his name and likeness for advertising, creating buttons such as this one, and placing ads in newspapers and magazines.

Taylor's first race was a publicity stunt by his employer who entered Taylor in an amateur race without his knowledge. Taylor was oblivious until his employer pushed him to starting line, but the cheers of the crowd inspired him forward resulting in Taylor's first victory at the young age of 13. However, over the next twenty years Taylor became one of the world's most famous bicycle racers. By 1898 Taylor held seven world records including the one-mile, and in 1900 was named the National Cycling Champion. Taylor toured internationally, tearing down records and earning world champion titles. At the height of his career he was one of the highest paid athletes and "Major Taylor" was a household name. 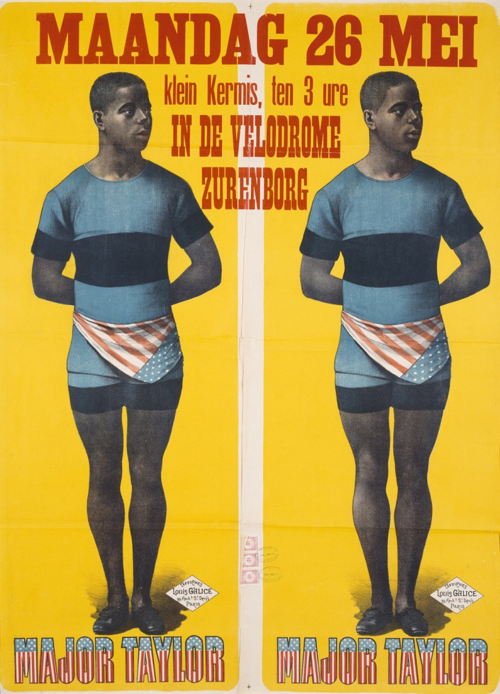 Both the American and international press sensationalized his skin color, often referring to him as a "colored rider" and inviting spectators to watch him defeat other white cyclists. They gave him the nickname The Black Cyclone. This image is in the collection of the National Portrait Gallery.

Despite his fame and talent, Taylor was subject to intense racism and discrimination. He was barred from races, turned away from restaurants and hotels, and subjected to racist insults throughout his career. At one point he was banned from a track in his hometown of Indianapolis after defeating white cyclists (and breaking two world records in the process).

Taylor retired in 1910 and quickly faded into obscurity. For Taylor, a retired black athlete, there were few options after retirement. There were no speaking engagements or endorsements. With his health deteriorating and his investments dwindling, Taylor eventually fell into poverty. In 1932 at the age of 53, Taylor died alone and penniless in a Chicago hospital and was buried in an unmarked grave. 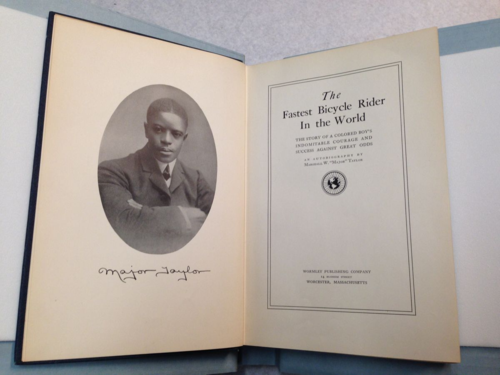 In an attempt to capitalize on his former glory days, Taylor penned and self-published an autobiography, "The Fastest Bicycle Ride in the World," but the book sold poorly. The bicycle boom was over and Americans cared little for former cycling champs.

In the 1940s, former bicycle professionals used money donated by Frank Schwinn to relocate Taylor's remains to a more prominent resting place in Illinois but it would be another forty years before Taylor's accomplishments were more formally recognized. In the 1980s, Taylor was inducted to the United States Bicycling Hall of Fame, and Indianapolis built the Major Taylor Velodrome, naming their new track after the man who had once been banned from it.

More recently, Taylor was posthumously awarded the Korbel Lifetime Achievement Award by USA Cycling, and the city of Worcester, Massachusetts, Taylor's adopted home, erected a statue honoring Taylor outside their library. Marshall "Major" Taylor was a pioneer black athlete and his incredible achievements are finally receiving the recognition they deserve.

Noelle Alvey is an intern with the Office of Education and Public Engagement.

Pink jersey of courage: Andy Hampsten, the first American cyclist to win the Giro d’Italia
As road racing season takes shape in the competitive cycling world, a close look at the dramatic story behind a leading artifact...