The Spirograph and kinematic models: Making math touchable (and pretty)

Remember that fun, spiral-drawing toy from the 1960s called the Spirograph? Turns out, those cool curves you made as a kid actually demonstrate some pretty useful mathematical concepts. Here's the mathematical story behind the toy in honor of Pi Day.

What came before the Spirograph? German Kinematic Models! 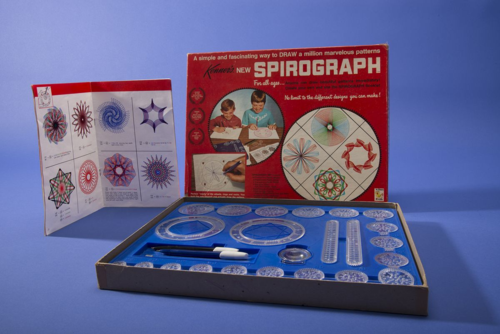 An original Spirograph in the Smithsonian’s collections.

What's a Kinematic model? As the name suggests, they're devices that move in some way. Mathematical kinematic models utilize mathematical concepts to draw certain curves that are useful in engineering and machine design. Before computer-aided design (CAD) programs and three-dimensional graphics packages, many curves with useful applications could only be drawn mechanically (and therefore less efficiently). At the height of the industrial age and prior to the digital age, many applications of mathematics were geared (pun alert!) towards making machines more efficient.

One of the first to tackle the prickly topic of straight line motion was Scottish engineer James Watt (1736-1819), often credited with inventing the steam engine. One of the pressing questions Watt needed to answer was how to convert circular motion produced by the steam engine to the linear motion needed to drive the wheels. The answer? Linkage: a set of metal or wooden bars linked at pivot points that can be articulated, creating the straight line motion so useful in engineering. (There's a cool animation of Watt's linkage, which is also used in automobile suspensions.) 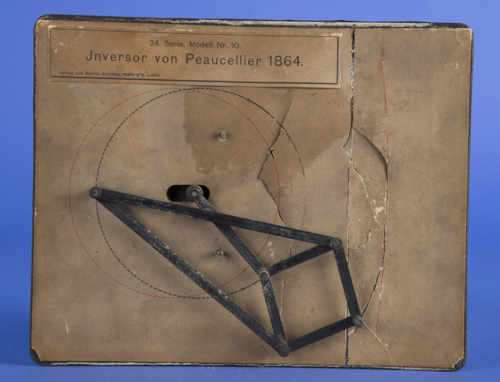 A famous trochoid is the cycloid, which is the curve drawn by a point on the rim of wheel as it rolls along the ground, as seen in the image below or in action here. First studied by Galileo, who coined the term, cycloids are used in the shaping of arches and the design of pendulum clocks, as well as in the solution of several theoretical questions. These curves are used in the shaping of gear teeth. It was found in the late 19th century that gear teeth shaped using trochiodal edges interlocked more efficiently and reduced friction. 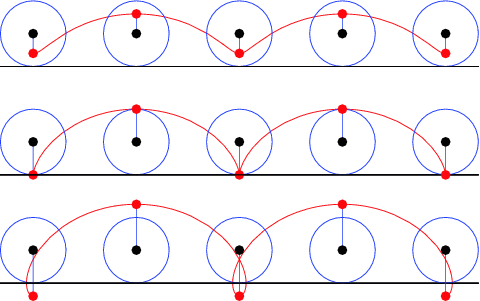 Three trochoid, the middle curve is a cycloid. The first of the three curves is a curtate cycloid because the point is inside the rolling circle as opposed to on its rim or on the extension of its radius. Image from Wolfram Mathworld.

Three of our Schilling models generate various trochoids. My favorite is model number 7 which generates the above curves. 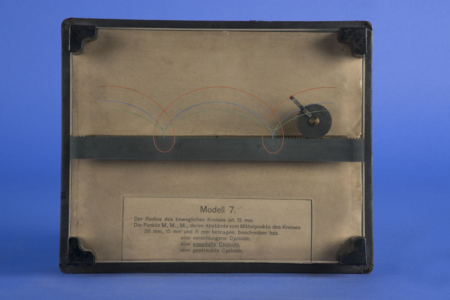 But what does all this have to do with the Spirograph?

The Spirograph consists of several plastic discs (known as roulettes) with toothed edges and variously placed holes in the interior. The toy also comes with two plastic toothed rings of different radii as well as a toothed bar (a stick-shaped piece). These latter pieces are pinned in place on a sheet of paper. One of the discs is chosen and a colored pen is placed through one of the holes. As the disc is rolled along the inside or outside of the ring or bar, a trochoid curve is drawn. The top curve in the first image is known as a curtate cycloid because the point in question is inside the rolling circle as opposed to on its rim or on the extension of its radius. This is the kind of curve the Spirograph would draw using a disc and the bar. Two curate cycloids are shown below drawn using a Spirograph, one with the disc rolling on the inside of the ring, the other rolling around the outside of the ring. 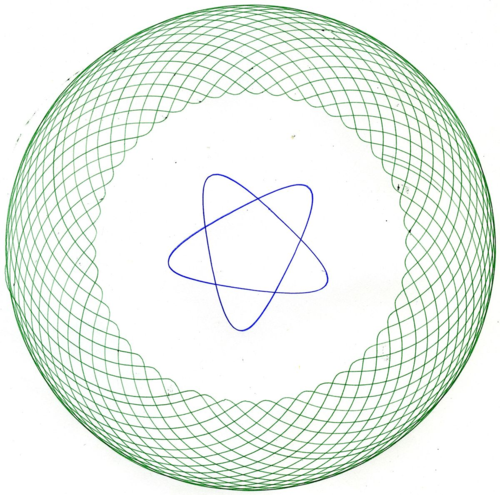 Spirograph drawing by the author

The ten Schilling models the museum has were donated to the museum in 1967 by the University of Michigan. These types of models were very popular teaching devices in the late 19th and early 20th century. One of the most prolific makers of mathematical models was the German firm of Martin Schilling. His 1909 catalog lists over 300 models.

Sadly for those of us who love to touch our mathematics, mathematical models have become less popular with the advent of computer algebra systems that can generate almost any mathematical image or curve and allow you to explore it in three dimensions.

Other than the occasional model of a cone that shows the various conic sections that arise from slicing the cone found in pre-calculus classrooms, physical mathematical models are rarely found in classrooms. Luckily, some of these models are now finding the virtual light of day in online museum collections such as the Smithsonian's. You can explore our Schilling Kinematic Models online, including this attractive one. 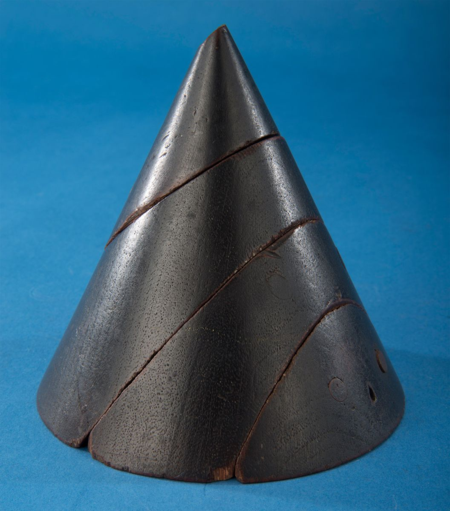 Wood Conic Section model, ca. 1900. Shows an ellipse, parabola and hyperbola. Cutting the cone parallel to the base would produce the fourth conic section, a circle.

Dr. Amy Shell-Gellasch is a historian of mathematics who volunteers in the Division of Mathematics and Computer Science. Continue your Pi Day celebration with this post about women in math or this one on the "Swamp Fox of Missouri" and his protractor.